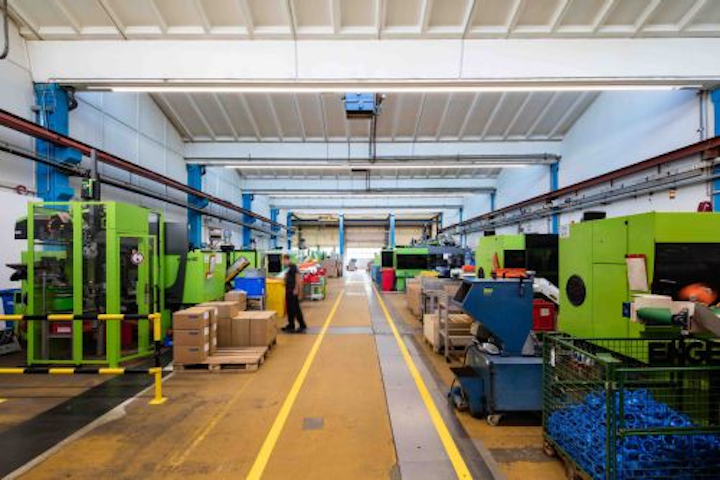 Zumtobel Group’s new services operation has announced its first lighting-as-a-service installation, at an Austrian plastics factory that is spending nothing upfront on new LED lighting but is instead paying a monthly fee for guaranteed lighting levels and energy reduction.

Interested in articles & announcements on lighting as a service?

The deployment at the Faigle Kunststoffe GmbH facilities is the responsibility of NOW, Zumtobel’s two-year-old lighting-as-a-service (LaaS) unit that the company melded into the Zumtobel Group Services (ZGS) division it formed in March. Dornbirn, Austria-based Zumtobel created ZGS in an effort to ratchet up its push to connect lighting to the Internet, part of the Internet of Things (IoT) movement that is gripping the lighting industry.

IoT lighting environments use chips, sensors, and network connections to support richer than normal lighting controls, facilitating features such as color temperature adjustments, and allowing lights to respond to a wide array of inputs. At the same time, the lighting infrastructure can collect data about building operations such as occupancy, helping facility managers better know when to turn heat on or off, how to reassign rooms and floors, and so forth.

The Faigle Kunststoffe job is not, however, an IoT deployment. 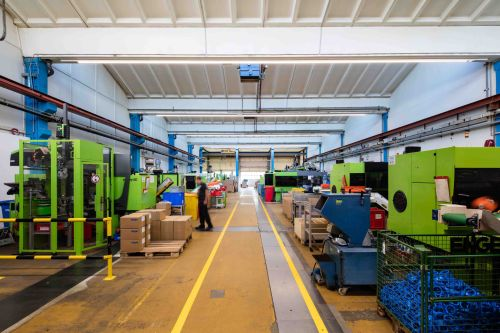 Rather, it is a more straight-up deployment in which ZGS has replaced fluorescent and other technology with Zumtobel brand LED luminaires including Zumtobel and Thorn at four Faigle production halls in Hard, Austria, near the Swiss and German borders in the west of the country.

Zumtobel did not say how much it is charging for the five-year contract, which guarantees a substantial reduction in energy usage as well as a minimum lighting level of 400 lx.

“The service agreement, including planning, implementation, and support as well as project management and a financing model, guarantees a reduction in energy consumption by 65%,” ZGS said. “With ‘light as a service,’ the customer does not buy any luminaires, but rather pays a fixed monthly rate and is in turn guaranteed that the lighting solution will provide a pre-defined level of illumination.”

Faigle can eventually tie the DALI-equipped luminaires into the building management system.

“We had the choice of purchasing the new luminaires ourselves — as we were accustomed to do — or of transferring the responsibility for the lighting installation to Zumtobel Group Services by opting for the NOW service package,” said Faigle production manager Jürgen Zech. “The second option seemed to offer various advantages. On the one hand, we saved ourselves a great deal of time, since the NOW team has undertaken both the planning and the selection of the luminaires. On the other hand, it is very reassuring to know that the lighting is in good hands for the next few years — not only with regard to maintenance, but also concerning possible changes to standards and legislation. We are guaranteed that the lighting will be continually maintained and if necessary improved. Furthermore, we consider the savings that we achieve with the new LED luminaires very positive.”

The system does not include variable color temperatures.

But ZGS is working on other deployments that can vary color temperatures, using IoT technologies.

For example, as LEDs Magazine reported earlier this year, Zumtobel has a small trial implementation in three conference rooms at the London headquarters of Land Securities, one of the UK’s largest commercial property developers.

Ian Trent, engineering director at Land, said at London’s LuxLive 2016 exhibition — run by LEDs’ sister publication Lux — that one conference room will sample wirelessly-controlled IP lighting; another will sample lighting connected via Power over Ethernet (PoE); the third will use more traditional lighting controls on lights powered by conventional electrical lines. Land will be noting the relative merits and functionality of each.

ZGS recently provide further details after the trial went live. It said that in one of the rooms, called the “human-centric room,” Land can tune the LED lighting to different color temperatures in an experiment to foster productivity or relaxation. Cold, blue-enriched white light is believed to induce alertness, while warmer tones such as ambers are associated with relaxation.

Another room called the “connectivity room” is equipped with sensors that adapt lighting levels to how the room is used, adapting tones and brightness to, say, presentation or discussion activities, ZGS said. The sensors also send room use data to the cloud to help facility managers decide how to optimize space. For example, they could convert unused conference room into desk areas. Zumtobel worked with Bosch Software in developing the cloud system.

The third room is a more basic implementation of radio technology to control existing LED luminaires, focused on energy savings.

All three tie into Litecom, Zumtobel’s lighting management system, which today works on DALI but will in the future work with Internet schemes such as PoE, ZGS executive vice president Thomas Knoop said.

In a data-based services trial, Zumtobel in March announced a trial of a lighting-based indoor positioning system using Bluetooth technology at a large E.Leclerc mass merchandise market in France, which guides shoppers around the store. The idea is to upsell in-store customers who have agreed to tie their loyalty scheme into the system. The technology suggests individually tailored deals, products, and advice delivered to the shopper’s phone. The shopper can also use the phone to scan shelf-mounted barcodes and thus request missing items or more information from E.Leclerc staffers.

It is not clear whether the E.Leclerc pilot is part of ZGS or whether it resides in a different business segment.

Parent firm Zumtobel is also reaching for the IoT brass ring through its Tridonic operations, which makes smart controls that it largely sells outside of the Zumtobel brands which include Zumtobel, Thorn, Reiss, and ACDC. Tridonic recently expanded into the North American market. It offers a smart wireless control system called net4more, based on standards such as IPv6 and 6 LoWPAN (IPv6 over Low power Wireless Personal Area Network). It also has PoE products, and tailors wired controls depending on the wired technology common in a certain geography.

The move toward providing lighting as a service and IoT lighting is picking up steam. Just this week, for instance, lighting giants Philips Lighting and Osram both announced services moves. Philips launched a program called InterAct Office to sell wirelessly connected office smart lighting as a service. The move complements its existing PoE offerings. In PoE lighting, both data and electricity travel over Ethernet cable to and from LED lights. It potentially saves a lot of money on new construction and major retrofits, but can be expensive and disruptive to install in minor office changes, where the wireless approach is often regarded as more sensible and affordable.