The German carmaker is sampling IoT luminaires from Aurora that might accentuate the right model for the right shopper, suggest new floor layouts, and more. 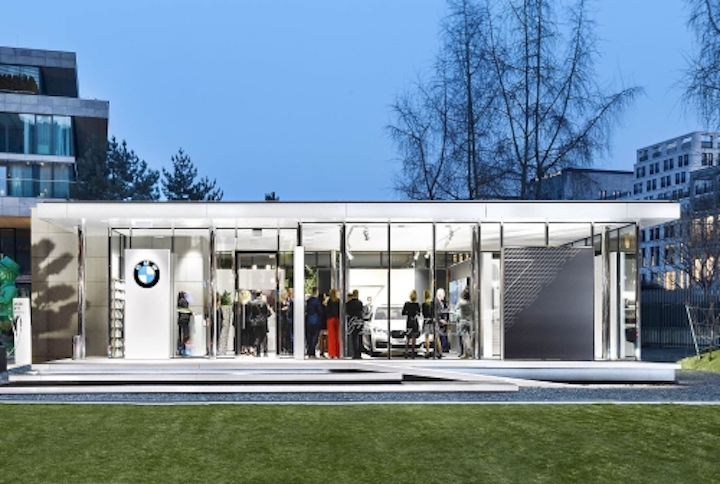 The German carmaker is sampling IoT luminaires from Aurora that might accentuate the right model for the right shopper, suggest new floor layouts, and more.

Carmaker BMW is kicking the tires on a smart lighting system for showrooms that would dynamically change settings to draw attention to different models and features. The Internet of Things (IoT) scheme, if deployed, might also help deliver information to smartphones as customers peruse the floor.

Aurora has provided BMW with LED luminaires from its new AXiO line, which Aurora previewed earlier this year at the EuroShop retail exhibition in Dusseldorf. The luminaires rely on embedded sensor and communication chips from Gooee, the smart lighting technology company headed and founded by Aurora founder and CEO Andrew Johnson, which supplies Aurora as well as Aurora competitors. 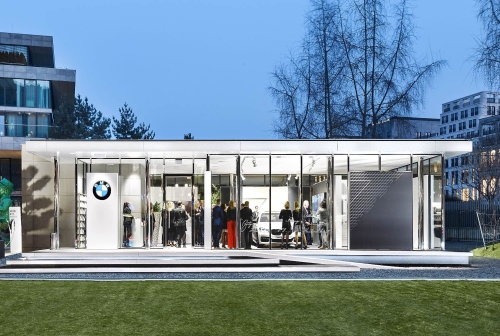 If BMW were to proceed with smart lighting, the technology could appear in different settings, such as in dealer showrooms or in temporary pavilions, like the one pictured above at the Berlin International Film Festival in February, installed without IoT connections before the Munich IoT test began. (Photo credit: BMW.)

Many of the uses would entail connecting to cloud computing. Much of the value of the IoT in general is expected to accrue from data that net-connected devices and equipment collect. As LEDs Magazine has reported, Aurora hopes to start monetizing data by next year.

Aurora provided little detail of how AXiO will work or exactly what it would do in a BMW showroom. BMW would not comment for this article.

The technology is believed to alter light settings in order to accentuate whole cars and the cars' features. It possibly triggers audio and video content in a localized area, and could deliver relevant information to a customer's smartphone. The Aurora smart lighting system is also expected to help BMW or dealers determine how to better position cars on a display floor.

AXiO's broad capabilities include automatically adjusting light levels and color temperature in response to human presence. For example, lights might brighten if sensors detect that a lot of people are present. Or they might switch to a color temperature that highlights a particular product — to cite an example from another industry, they might provide more reds to help a Coke can stand out. In opt-in schemes, customers' smartphone apps could instigate light patterns that are tailored to their own interests. A smart BMW showroom might therefore interact differently with a Mini shopper than it would with someone interested in a luxury vehicle. Aurora would not elaborate on which of the many AXiO facets BMW is trialing.

“With the AXiO platform, the lighting enables a new dimension of sensing and control,” Bennett said. “From enhancing a car’s assets when a customer approaches it to the delivery of immediate tailored information as they’re walking through the door, the BMW customer experience will be very different to that elsewhere.”

Aurora itself acknowledges that it has taken longer than some people might have expected for smart lighting to advance into the commercial market. From the perspective of Aurora technology provider Gooee, one of the holdups has been the absence of a standard for meshing together Bluetooth wireless communication chips. Gooee uses Bluetooth, which has a limited range but one that can be extended via a mesh topology.

The Bluetooth Special Interest Group is expected to finally issue a long-delayed standard as soon as this summer, possibly this month.