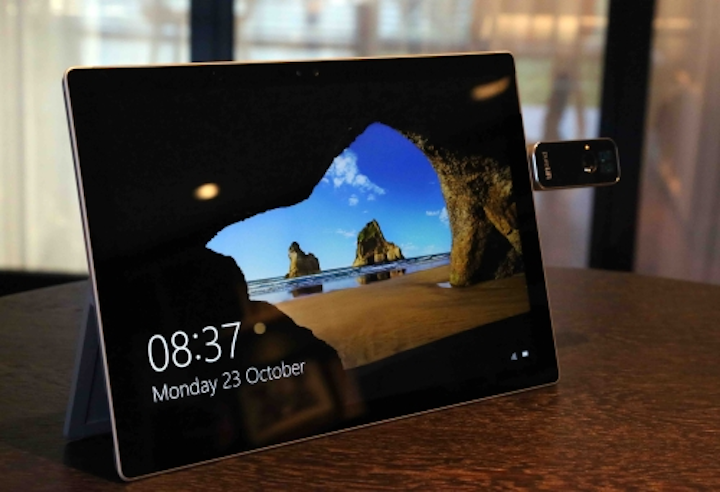 The words “slow” and “steady” often go together to describe progress of a certain sort. They certainly seem to apply to pureLiFi's efforts to build a Li-Fi receiver small enough to fit inside a gadget, and thus eliminate the cumbersome and costly need to use dongles for the job.

Interested in articles & announcements on lighting networks and Li-Fi technology?

Yesterday, the company revealed a technological breakthrough on the road to dumping dongles (USB sticks). And while the size of the circuitry has indeed shrunk, what pureLiFi showed as a dongle replacement was, um, a dongle. It's part of a system that pureLiFi has branded LiFi-XC.

PureLiFi said the new dongle “is three times smaller than the previous generation.”

For a quick refresher: Li-Fi, or light fidelity, transmits the Internet wirelessly via the lightwaves emitted by LED light sources. It is in prolonged early development days, yet some proponents believe it will eventually complement and offload crowded Wi-Fi services (which use radiowaves) by opening up a vast amount of spectrum.

One challenge: Laptop, tablet, phone, and gadget makers have not yet built Li-Fi receivers into their devices, the way they customarily do with Wi-Fi. It's a bit of a chicken-and-egg situation. Li-Fi components have been too large, but if a major device vendor such as, say, Apple, would commit to embedding them, then pureLiFi and other Li-Fi vendors such as Oledcomm and Philips' Luciom might then have economies of scale to support more development and mass production. 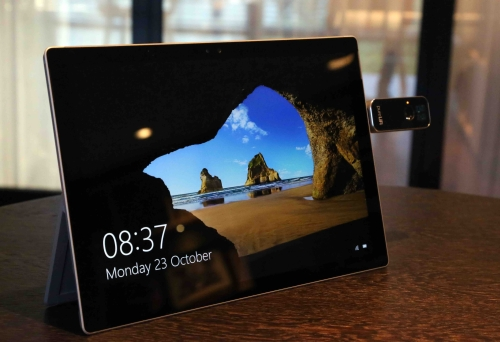 Still dongling after all these years: PureLiFi said the electronics on its latest USB Li-Fi dongle are now small enough to fit inside this Microsoft tablet, but it will probably take another 2–3 years before we see integrated products. (Photo credit: pureLiFi.)

At yesterday's announcement in London, pureLiFi said its chips are “now small enough to be integrated into many laptops, tablets, and smart appliances.” Yet the company stopped short of actually showing such a device. Instead, it plugged the XC dongle into a USB port on a Microsoft Surface tablet computer.

“We have now reached the point in miniaturization where we will see Li-Fi move beyond the dongle and be integrated,” said pureLiFi CEO Alistair Banham. “The LiFi-XC is a big step towards getting this disruptive technology into every bulb and every mobile device.”

Chief operating officer Harald Burchardt told LEDs Magazine that integrated devices are probably still another 2–3 years away, corresponding with when a Wi-Fi spectrum crunch will hit, and with when device makers support the concept.

The Edinburgh-based company, founded in 2012, continues to enhance the different facets of its Li-Fi systems, including the access point mounted near ceiling lights that ties LED lights into the Internet and that modulates the lightwaves in a manner that carries the data from the light to computing devices.

The access point on the new LiFi-XC now works with more LED light brands than previously.

“The LiFi-XC offers plug-and-play connectivity out of the box and supports an even wider range of off-the-shelf LEDs,” said PureLiFi chief technology officer Mostafa Afgani.

At yesterday's demo in London, PureLiFi routed broadband to the access point via an Ethernet cable. It can also use Power over Ethernet (PoE) and powerline communications (PLC).

PureLiFi also now works with three luminaire makers to embed access point functions into the luminaire. It recently added India's Wipro to the mix, after having teamed over the last year with France's Lucibel and with Linmore LED, which has labs in Fresno, CA.

Li-Fi is a two-way method of visible light communication (VLC), which modulates lightwaves as a means of sending data. One-way VLC has been slowly catching on for indoor positioning (IPS) and asset tracking applications. For instance, German supermarket chain EDEKA Paschmann is using VLC for an IPS system at a store in Dusseldorf.

Other technologies are competing for the same purposes. A large IPS deployment at nearly 1000 Target retail stores in the US, for instance, will use Bluetooth beacons embedded in Acuity LED ceiling lights, although Target seems to have left open the possibility that it might also use VLC. Watch for LEDs’ follow-up to our recent Target-Acuity story linked above.

PureLi-Fi will be demonstrating its wares at the LuxLive 2017 exhibition in London Nov. 15 and 16, where the Internet of Things will take center stage, and where a Li-Fi zone will include the latest in Li-Fi technologies. LuxLive is organized by LEDs Magazine'ssister publication Lux.