Seeking both to ensure a unified understanding of the meaning of human-centric lighting or HCL and guide deployment, LightingEurope and the International Association of Lighting Designers have defined expected benefits, typical enabling technologies, and potential applications. 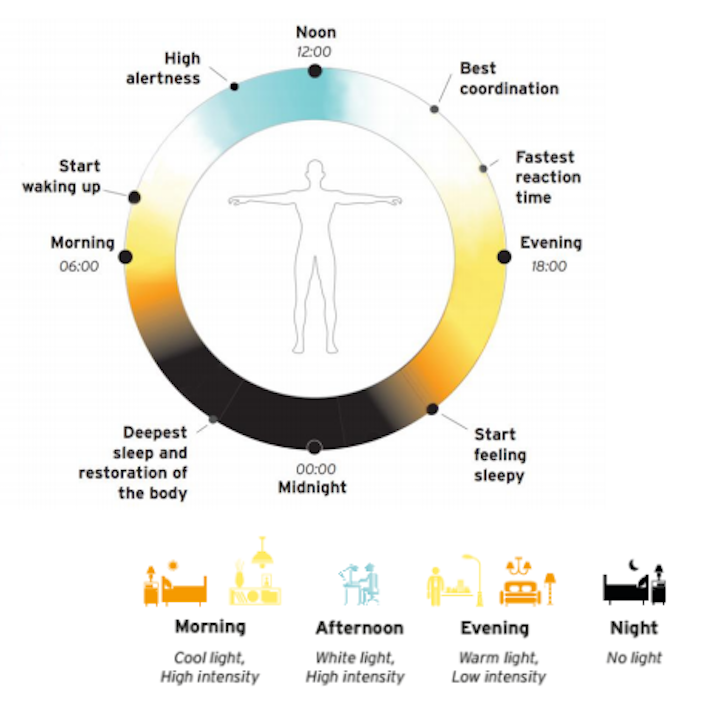 Seeking both to ensure a unified understanding of the meaning of human-centric lighting or HCL and guide deployment, LightingEurope and the International Association of Lighting Designers have defined expected benefits, typical enabling technologies, and potential applications.

In a jointly-issued position paper, LightingEurope and the International Association of Lighting Designers (IALD) have attempted to place a virtual fence around the concept of human-centric lighting (HCL). The goal of the paper appears to be delineating what is and is not HCL and paving the way forward for a smoother proliferation of the technology that is being enabled by a transition to LED sources. Meanwhile, the concepts laid forth in the paper should make it easier to spot companies and products that are attempting to leverage HCL momentum in the market while not meeting the core tenets.

Of course, it’s fair to ask if HCL is an appropriate term for lighting of any type. Many in the industry have started to avoid the term and use other descriptors such as lighting for health and wellbeing. But the IALD and LightingEurope appear to have embraced the HCL term and attempted to define elements inherent in HCL products and installations.

The position paper opens by noting that HCL should deliver some combination of “excellent visual, biological, and emotional effects of light.” The CIE (International Commission on Illumination) is advocating similar concepts for what it calls integrative lighting. 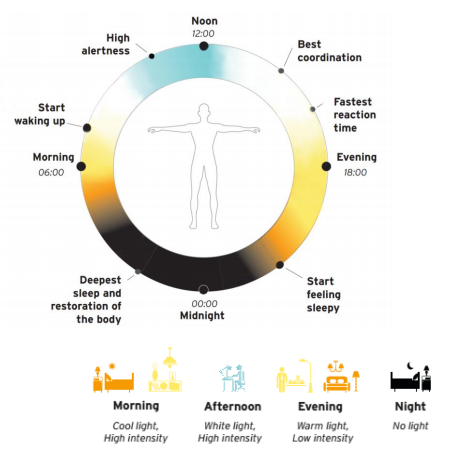 The position paper on human-centric lighting describes the natural cycle of light effects on the human body’s internal clock, and gives examples of how to mimic that cycle with electric light.

Visual benefits are fairly well understood at this point. The position paper defines biological benefits as alertness, cognitive performance, and good sleep-wake cycles among others. Examples of emotional benefits might be an improved mood or impulse control.

The paper further defines the concepts of both technical and content enablers of HCL. On the technical side, we have tunable color or white capabilities and controls. On the content side, you might find circadian light or a 24-hour programmatic pattern, or presets tied to specific activities.

Last, the paper addresses applications or the connection between the enablers and what humans might do during their day that would benefit from different lighting conditions. The document states, “Human Centric Lighting is aimed at providing the right light for our activities at the right place at the right time.” Indeed, the paper includes a graphic that suggest a potential cycle for a 24-hour day.

LightingEurope and the IALD did specifically suggest that the industry needs to resist improper use of terminology including HCL and the tenets of the technology. Moreover, the paper concludes stating that promised benefits of an HCL installation should be backed by scientific evidence and must be realized through a dedicated design and specification process.

LightingEurope has been among the most aggressive proponents of HCL in representing European lighting manufacturers and national lighting organizations in the region. In our March 2017 issue, in fact, we have an article on lighting regulations in Europe and a model for transition to a converged smart lighting and HCL future. But we also covered HCL in two other recent feature articles. Last summer we focused on HCL in healthcare settings. And later in the year we covered the potential of HCL in the workplace.

You can read the full position paper here.