A new alliance with Italian transportation interior specialist Ellamp targets trains, too. But will the technology ever get rolling? 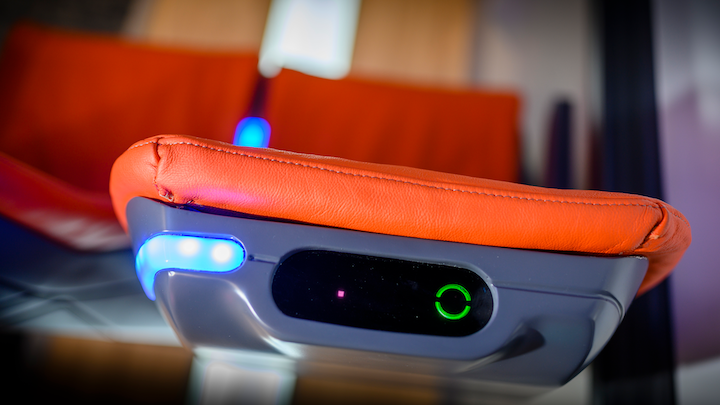 This transceiver in the center of a headrest receives the infrared Li-Fi signal and wires it to a video screen mounted just below it on the seatback. (Photo credit: Image courtesy of Signify.)

Hoping to establish a market for Li-Fi in the public transportation sector, Signify has partnered with an Italian bus and train interior specialist to develop systems that would use light to deliver onboard entertainment programming, and would eventually deliver Internet service.

The alliance with Bodio-Lomnago-based Ellamp Spa would give passengers on private or public buses touch screen control of video displays mounted on seatbacks. Passengers could also use the controls to order meals and drinks, and to adjust air conditioning and light levels. The two companies are targeting public and private transportation.

All the server-connected movies, TV shows, and other goodies would be delivered via modulated infrared light waves. Li-Fi uses light waves rather than the radio waves of Wi-Fi and cellular service, a technique which proponents say portends faster, more reliable, and more secure service. Sometimes it uses visible light, and sometimes, as is the intention with Signify and Ellamp, it uses infrared.

But Li-Fi, which is roughly a 7-year-old technology, has yet to crack mainstream use. It received a big publicity boost recently when Air France deployed it on a one-off basis on a commercial flight from Paris to Toulouse.

Signify was not part of that trial, although it has teamed with the flight’s Li-Fi integrator, Latécoère, and with South Korean aerospace firm Huneed Technologies to develop Li-Fi for commercial aviation service using Signify’s Trulifi brand.

At the time of announcing the aviation alliance last month, Signify identified the transportation sector including airlines, buses, and trains as a potential market. It repeated that assertion with Ellamp.

“We’re on the verge of a new era of connectivity,” said Olivia Qiu, chief innovation officer at Signify. “Imagine having reliable, secure, and fast connectivity, wherever there is light. That is the promise of Trulifi — the ability to provide people with the same high-quality and secure connectivity experience whether they’re aboard a bus, train, airplane, or on the ground.”

One of the advantages of Li-Fi over Wi-Fi on a bus is that Li-Fi is would deliver a more stable signal that is not susceptible to jostling movements the way Wi-Fi is, Signify said.

If Signify and Ellamp have lined up any bus or train companies to trial the Li-Fi service, they have not yet identified them.

“We’re currently in the pilot phase with Ellamp, which develops the interior systems on transportation vehicles such as buses and trains,” a Signify spokesperson told LEDs Magazine. “While we see healthy appetite from bus as well as train operators, we will announce the companies which are involved in onboarding the technology at a later stage.”

The initial deployments are not intended to provide Internet service. The spokesperson told LEDs that should change “when telecommunications providers enable broadband support to moving vehicles.”

At that point, passengers would likely have to attach a USB Li-Fi receiver (a “dongle”) to their laptop or other gadget to use Internet service. Laptop and gadget makers have yet to embed Li-Fi chips into their devices the way they have with Wi-Fi. The absence of native Li-Fi on devices has held back its uptake. Part of the problem is that an indecisive standards battle is dragging on, between backers of protocols from the Institute of Electrical and Electronics (IEEE) Engineers on the one hand, of protocols from the International Telecommunication Union (ITU) on the other. Chipset prices remain high in the meantime.