Further testing on an outdoor SSL installation in the desert near Yuma, AZ verifies that dirt can lead not to just lumen depreciation but to significant changes in the distribution pattern of LED-based luminaires. 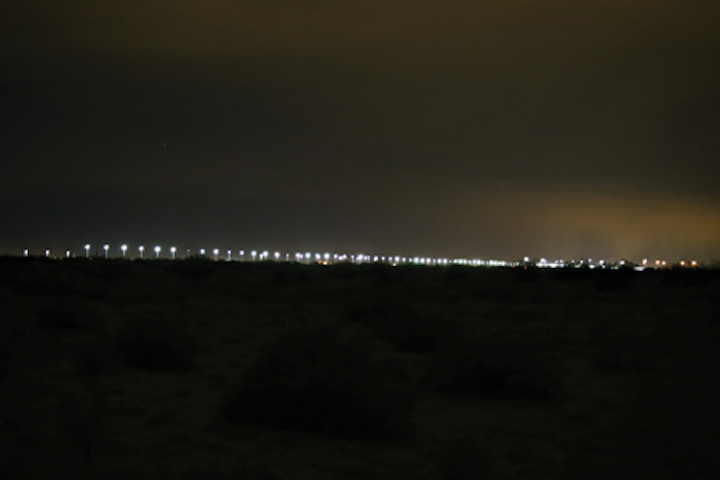 Further testing on an outdoor SSL installation in the desert near Yuma, AZ verifies that dirt can lead not to just lumen depreciation but to significant changes in the distribution pattern of LED-based luminaires.

The US Department of Energy (DOE) has released the third in a series of Gateway reports on a trial installation of LED-based luminaires in a harsh desert environment near Yuma, AZ. The continued research confirms that dirt is the major cause of unanticipated levels of lumen depreciation and in changes in the beam distribution at the outdoor solid-state lighting (SSL) project.

The DOE released the initial report on the Yuma project back in late 2014 with the outdoor SSL installed along a section of border fence separating the US and Mexico. A major focus of the project was testing LED-based luminaires in the harsh environment with severe temperature swings and high winds and blowing sand. The initial report indicated improved illumination relative to the legacy quartz metal-halide (QMH) lighting along the fence.

The DOE's initial report on the outdoor SSL installation in Yuma noted some lumen depreciation that was unnacounted for in 2014.

Still, even in the early stages of testing the DOE discovered that the lumen output of the outdoor SSL was depreciating faster than expected. Moreover, the light levels near the pole were increasing while levels were decreasing significantly away from the pole. In May of 2015, the DOE issued a second report documenting the continued change in output and pattern and noting that the researchers had yet to fully identify the cause. As we noted in our prior coverage, the DOE had removed two of the luminaires for laboratory analysis and replaced those fixtures with new models that were instrumented with thermal sensors.

The latest report includes an update on the installation after 7000 hours of operation. The average horizontal illuminance has decreased by 25% on the primary border fence and the average vertical illuminance decreased by 34%. Furthermore, the shift in beam pattern continued.

The laboratory testing of the two removed luminaires, meanwhile, has revealed that dirt depreciation is the primary factor behind the changes in the outdoor SSL. The DOE first performed photometric testing in a laboratory on the dirty luminaires and then repeated the testing after cleaning the fixtures. The testing shows that intensity at angles corresponding to the area directly beneath the pole would increase by 16% to 21% when the luminaires are dirty. Levels measured at peak-intensity angles away from the poles decreased by 15% to 26%. Those laboratory tests were said to be consistent with the results measured in the field at Yuma.

Indeed, we have covered the issue of dirt depreciation before. In our feature article on the IES Street and Area Lighting Conference last year, we reported on a presentation made by Professor Ron Gibbons, director of the Center for Infrastructure Based Safety Systems at the Virginia Tech Transportation Institute (VTTI). Gibbons has researched the dirt issue and studied methods for cleaning luminaires. Gibbons concluded that municipalities and other street light owners will have to establish periodic cleaning cycles that may not be as costly as relamping legacy fixtures but will still take a bite out of the potential savings of outdoor SSL. 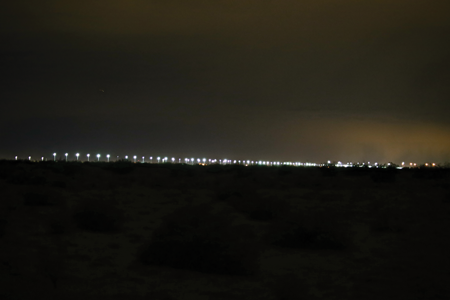 This photo from the DOE Yuma site shows the outdoor SSL fixtures at the far left of the pole line create less light pollution than the HID incumbents.

The DOE, meanwhile, has not reported on the most recently installed luminaires that were instrumented for robust temperature measurements. The researchers have been logging data since September of 2015 and will continue to do so through the summer of 2016. The agency will then report on that data and any correlation of temperature swings and luminaire performance. You can read the full report on the DOE website.

Commercially-available luminaires sold with efficacy claims in the 200-lm/W range deliver mixed results in US Department of Energy testing at PNNL, with glare being a recurring issue and most products falling short of efficacy specifications.
Maury Wright
Jul 26th, 2018

The LRC’s Mark Rea explains why a thorough understanding of metrics and test methodologies is necessary in order to make fair comparisons of the performance and energy savings potential regarding horticultural lighting luminaire types.
May 16th, 2018

An analysis of supplemental horticultural lighting in greenhouses by the Lighting Research Center contradicts the conclusions in a recent Department of Energy report relative to the energy efficiency advantage of SSL.
Maury Wright
May 15th, 2018

UL weighs in on human-centric lighting, certifying an LED for low blue levels

In a human-centric lighting twist, Circadian Light's luminaires switch from a blue pump to a violet one at night for health reasons.
Mark Halper
May 8th, 2018

Understand the causes, consequences, and measurement of light flicker (MAGAZINE)

LM-80 LED test reports from the Citizen Electronics Laboratory are no longer being accepted for market transformation programs at Energy Star and DLC after Citizen was found to have falsified some test data.
Maury Wright
Apr 3rd, 2018

The US Department of Energy has said that it will end the LED Lighting Facts program at the end of March, and the DesignLights Consortium will need a new method to hold lighting manufacturers accountable for SSL product performance relative to specifications.
Maury Wright
Mar 6th, 2018

The US Department of Energy said that a complete switch to LED lighting for horticultural applications would deliver 3.6 TWh in energy savings or $240 million annually in the US.
Maury Wright
Feb 28th, 2018