Sensor Electronic Technology Inc. has received the Tibbetts Award from the US government for its technological innovation in UV LED technology and products. 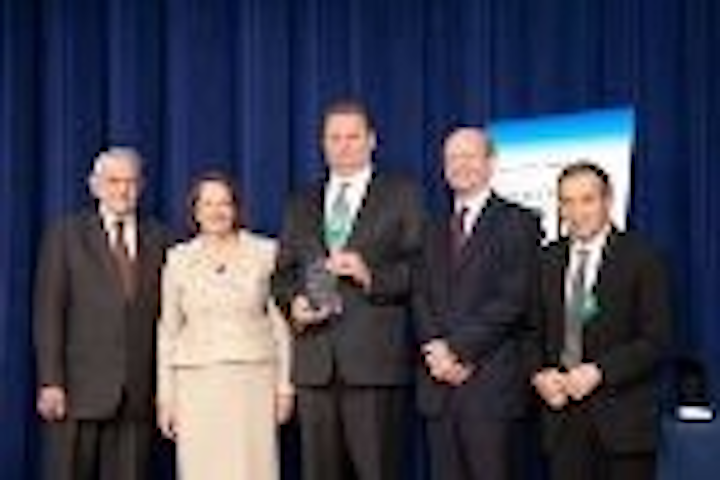 Sensor Electronic Technology, Inc. (SETi), a maker of ultraviolet (UV) LEDs and UV-LED products based in Columbia, SC, has been honored with the Tibbetts Award by the US government. SETi founders Remis Gaska and Michael Shur were presented with the award by the US small business administrator, Karen Mills, at the White House. The Tibbetts Award recognizes SETi for the critical role it has played in research and development for the US government under the Small Business Innovation Research (SBIR) program.UV-LED technology provides an energy-efficient alternative to mercury lamps, and is the fundamental building block for counterfeit identification flashlights, machine-vision systems, curing systems and water sterilization systems. In fact, SETi recently entered into a joint-development agreement with Cascade Designs to develop multi-stage, portable water-purification systems for commercial, military and humanitarian applications.

The recipients of the award, Gaska and Shur, founded SETi in 1999 to develop electronic and optoelectronic devices based on III-nitride compounds. Under Defense Advanced Research Projects Agency (DARPA) and SBIR-funded programs, SETi has developed proprietary technology that led to the development of UV LEDs with peak emission wavelengths of 230-365 nm.

SETi continues to further its device technology and develop new applications of UV LEDs through multi‐agency programs. SETi recently announced that its LEDs have achieved over 10% efficiency in a 275-nm LEDs.

The Tibbetts Awards was named after Roland Tibbetts, who was instrumental in developing the SBIR program. Tibbetts Awards are presented to companies and individuals from the United States who are beacons of promise and models of excellence in high technology. Tibbetts Award winners are selected based on the economic impact of their technological innovation, and on whether they have met federal research and development needs, encouraged diverse participation in technological innovation, and increased the commercialization of federal research.