Silicon Valley start-up Soraa is manufacturing LEDs using a unique GaN-on-GaN process, and has used these to build high-performance MR16 lamps that are its first products. 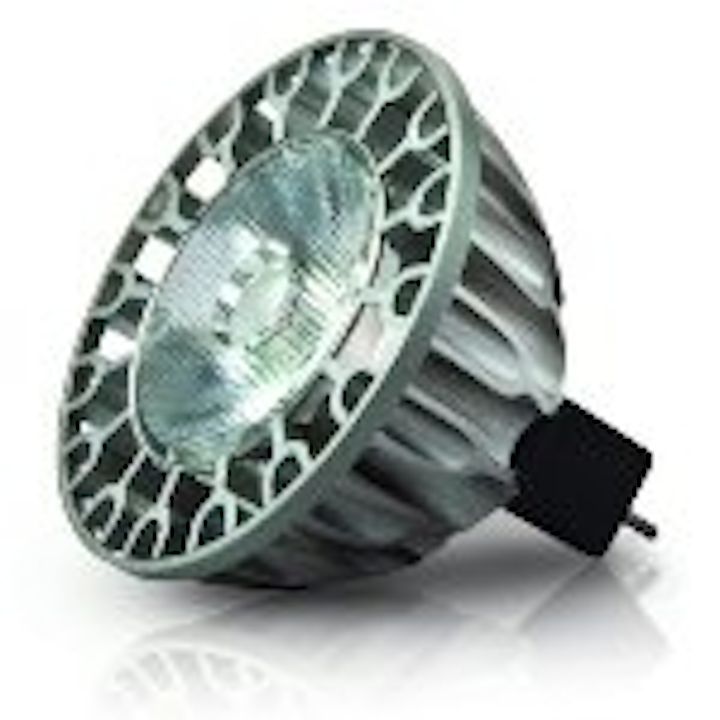 Soraa, a stealthy start-up company based in Fremont, California, made its first public appearance at last week’s Strategies in Light conference via a presentation from CEO Eric Kim, a booth in the exhibition, and a press release announcing the company’s first products, which are LED-based MR16 lamps. LED industry insiders were not surprised by the appearance of Soraa; after all, it’s quite hard to assemble a team of high-profile engineers, receive funding from Khosla Ventures and build an LED fab in Fremont without attracting attention. The company was founded by three UCSB professors – Steve DenBaars, Jim Speck, and Shuji Nakamura – who have been joined by key personnel from Philips Lumileds and elsewhere. Kim, a former senior Intel executive, was announced as Soraa CEO in June 2010.

Nakamura made a huge contribution to the development of the LED industry during his time at Nichia in the 1990s. More recently, he is known to have worked extensively on growing gallium nitride (GaN) material on GaN substrates. So, most observers expected Soraa to announce its first GaN-on-GaN LEDs. Instead, Soraa has incorporated those LEDs into MR16 lamps.

LEDs Magazine asked Kim about this business model. He explained that Soraa currently has a small production volume of LEDs, and feels that MR16 lamps is the best way to maximize revenue and profits at the present time. He also said that an LED replacement for a 50W halogen MR16 lamp “has been the most difficult LED lamp to do correctly, given its small size and intense, high-quality brightness requirements.” So the lamp can act as a demonstration of the performance capabilities of the GaN-on-GaN LED around which it is built.

Although Kim would not reveal pricing for the MR16 lamp, which available to commercial but not retail customers, the company’s press release said the product “is priced to achieve less than one-year payback.”

Most GaN-based LEDs are grown by epitaxy on top of sapphire substrates. Cree is notable for using silicon-carbide substrates, while others such as Osram and Bridgelux have made progress in using silicon for its low-cost potential.

Epitaxy is the growth of high-quality crystalline material, and it’s generally best to use the same material for the substrate, so that the crystal structure and thermal-expansion properties of the epitaxial layers match those of the substrate. However, this assumes the substrate material can be obtained with a large diameter and at reasonable (preferably low) cost. This has always been a problem for GaN, and explains why the LED industry mainly uses sapphire.

Kim wouldn’t reveal details of the GaN wafers, but it’s safe to assume they are significantly smaller and much more expensive to purchase than the sapphire used by other LED makers.

But GaN-on-GaN growth provides some big advantages. The LED material has up to a 1000-fold reduction in dislocation density compared with layers grown on sapphire, said Kim. This means that the GaN-on-GaN LEDs can be operated at a much higher current density (around 250 A/cm2) than other LEDs: GaN-on-sapphire LEDs typically operate up to around 100 A/cm2. Above this level, the LEDs are hampered by droop i.e. the fall-off in efficiency with high current density. According to Kim, the GaN-on-GaN LEDs suffer less droop (relative to initial efficiency) even when operated at 250 A/cm2. Driving the LEDs harder produces more light from a smaller area. The spec sheets for Soraa’s lamps says that “Soraa’s unique LED technology allows its lamps to operate effectively and efficiently at higher temperatures than other LED lamps, resulting in more light output per diode.”

But the innovation doesn’t stop there. Soraa is using triangular chips to greatly enhance the extraction efficiency of the light. The chip has a surface area which is many times larger than the area of the LED junction. Because the substrate is GaN it doesn’t absorb the emitted light and doesn’t need to be removed from the chip, as is commonly seen with many thin-film processes.

The GaN-on-GaN LEDs emit in the purple part of the spectrum, likely to be around 400-405 nm (not confirmed by Soraa). The company has combined the LEDs with a three-phosphor mix. It says this provides a complete spectrum, avoiding both the “blue overshoot” and the “cyan gap” seen with conventional blue LEDs and phosphors.

As also mentioned in one of the comments below, the lumen output of the lamp is around 350 lm (calculating this from CBCP and beam angle is not straightforward). At SIL, Kim was asked about the efficacy of the lamp and rightly said that this is not a figure usually quoted for directional lamps. However, 350 lm at 12W gives an efficacy of around 29 lm/W for the lamp. This gives some indication of where the performance of Soraa's LEDs sits relative to more conventional devices.