LED manufacturer Lextar Electronics claims to be the first LED maker in Taiwan to demonstrate blue-light emission from a processed 6-inch-diameter LED wafer. 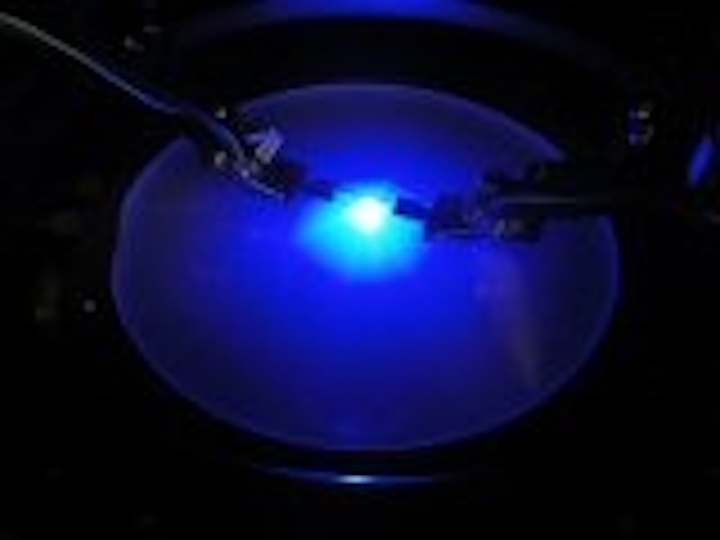 Lextar Electronics (TAIEX: 3698), a Taiwan-based LED manufacturer, announced recently the successful demonstration of blue-light emission from a processed 6-inch wafer. The company claims to be the first LED maker in Taiwan to light up a 6-inch processed wafer.

According to Lextar, its New Process Project Team has employed "unique exposure and grinding technology [to] avoid the issue of wafer warp and crack, which is the most challenging in 6-inch chip processing."

Processing on 6-inch (or more accurately 150-mm) substrate wafers is viewed as the likely next step for many LED makers due to significant advantages compared with using smaller wafer sizes. Sapphire wafer maker Rubicon has an ongoing contract to supply 6-inch sapphire wafers to LG Innotek.

Cree is building a new 150-mm LED wafer production facility in Research Triangle Park (RTP), while Philips Lumileds is already mass-producing LEDs on 150-mm wafers, according to a recent announcement.

Lextar is part of the BenQ Group, which also includes LCD panel maker AU Optronics. Lextar currently has 3 manufacturing plants in Taiwan, and will set up another one in Suzhou, China in 2011. The new manufacturing site at the Suzhou Science Industrial Park will integrate upper-, middle- and down-stream manufacturing i.e. from epitaxy through to packaging and system integration. Covering a land area of over 240,000 sq.m and with a projected 5,000 employees, the facility will be ready for production in 2011 with a total investment of USD 500 million.