Plessey's first silicon-based LEDs are relatively-low-output designs targeting the indicator and control-panel-backlight market, but the company says it will quickly deliver LEDs for general-lighting applications. 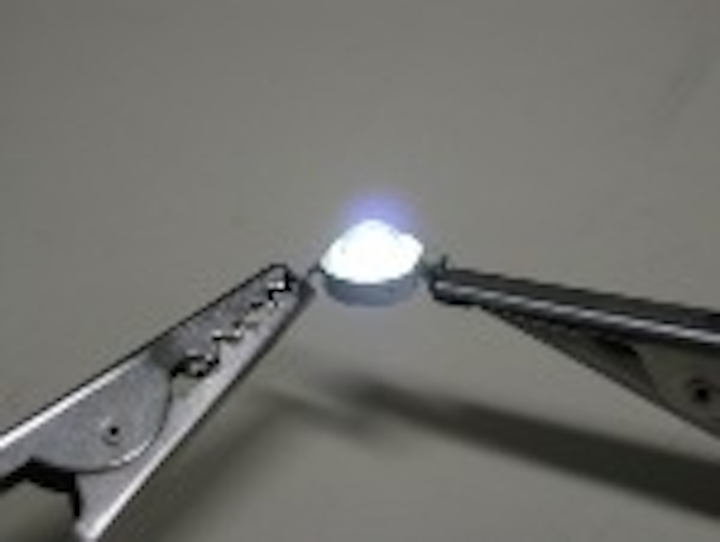 Plessey has announced that it is sampling LEDs manufactured using gallium-nitride-on-silicon (GaN-on-Si) technology, and will be capable of shipping production orders within six weeks. The first products only offer flux output in the 1-3-lm range and will target applications in the indicator or control-panel-backlight segments. Plessey plans to serve solid-state lighting (SSL) applications such as retrofit lamps with LEDs due within the next year.

Plessey insists that it is the first LED manufacturer to ship silicon-based LEDs on a commercial basis. Both Lattice Power and Toshiba have previously made such claims, but GaN-on-Si LEDs from those companies have yet to be readily available. Plessey COO Barry Dennington said customers can immediately order its MAGIC PL111010 LEDs in sample quantities from distribution and that the company will be able to fulfill significant-volume orders within six weeks.

Dennington called Plessey's first LED an entry-level product, acknowledging the low performance level of the device. But he insisted that it is a commercial offering calling it "full production quality." He also said that this initial product is vital to establishing the company's manufacturing capability and supply chain. Dennington said, "We have real evidence of Gan-on-Si LEDs built on 6-in wafers that are available for purchase."

Plessey has published a data sheet on the devices. The LEDs deliver 1.3 to 3 lm across five intensity bins. Nominal forward voltage is 3.3V and maximum drive current is 25 mA. Those specifications place efficacy in the range of 15-36 lm/W.

The main allure of a silicon substrate is lower cost. Plessey didn't address the price of the new LEDs directly, but did describe several ways in which the products will drive down cost. For starters, Plessey is fabricating the devices on an existing 6-in silicon line that it previously used to manufacture ICs. That fab is likely paid for and fully depreciated. Those ICs that were manufactured on the 6-in line have been transitioned to a newer 8-in line leaving the 6-in line to be optimized for LEDs.

Plessey CTO Keith Strickland said that the company is using standard silicon wafers. Dennington said, "The starting material is very very low cost." Plessey has developed a proprietary manufacturing process and LED architecture, staring from the technology base that the company acquired last year from CamGaN, a University of Cambridge spin-out.

Dennington added that the 6-in wafers enable a greater number of LEDs per wafer, again reducing cost. That's a true but complex statement, and you can read more on the topic in a recent feature article on wafer size. Moreover, leading players in GaN-on-GaN LEDs are moving to 6-in wafers to realize similar cost savings.

For Plessey, the ultimate path to success will lie in executing to what is a clearly aggressive roadmap and quickly delivering LEDs for the broader SSL market. Strickland said, "We will quickly move up to the 60-70 lm/W range."

"We have a roadmap of 4-5 products that we will launch in the next 9-12 months," said Dennington. "By the end of the year we will have LEDs that are capable of going into incandescent lamp replacements."

Meanwhile, Plessey will sell the first products into the indicator market and begin to realize revenue. Dennington said that some SSL vendors selling decorative products even have interest. And manufacturers working on mainstream SSL products can experiment with the LEDs and contemplate the use of next-generation products in general-illumination applications.

Plessey also plans an aggressive ramp of its manufacturing capacity. Dennington said the company would order a second MOCVD reactor in the coming weeks and hopes to scale up to 10 reactors in the next two years.