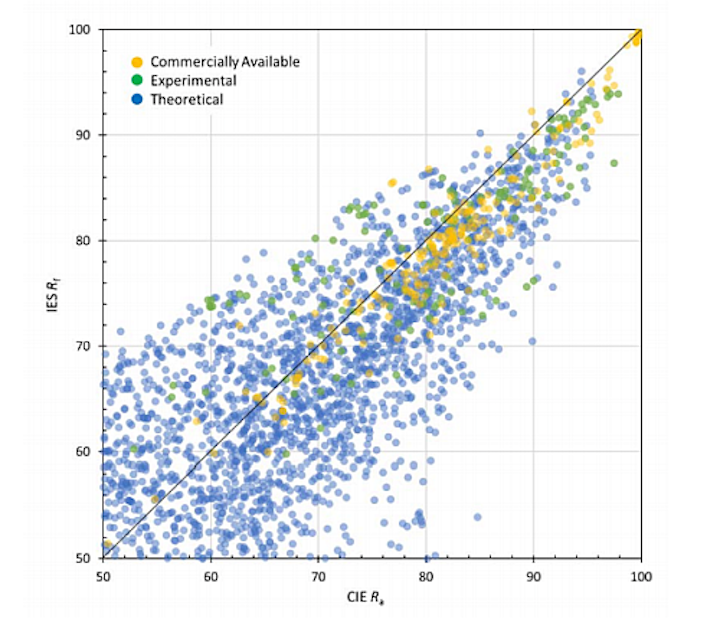 The DOE has published color metric research that compares the Illuminating Engineering Society (IES) TM-30 Rf color fidelity metric with the International Commission on Illumination (CIE) CRI Ra metric and with the newly emerged CIE Rf metric. Members of the CIE have long acknowledged shortcomings with CRI for LED sources, especially in accurately characterizing how a source renders saturated colors such as deep reds, but the CIE has at the same time opposed alternatives such as TM-30. The new DOE work documents TM-30 as more accurate with many sources and also finds near alignment between IES Rf and CIE Rf.

Interested in articles & announcements on Department of Energy reports?

We at LEDs Magazine have long advocated that the industry should move to the TM-30 two-metric standard that includes separate fidelity and gamut (Rg) elements. But opponents have argued that IES Rf and CIE Ra return similar scores for commercially-available LED sources, making a move to TM-30 unjustified.

The new DOE research was authored by Michael Royer of the DOE’s Pacific Northwest National Laboratory (PNNL) and was initially published in LEUKOS — the journal of the IES. Subsequently, the DOE also published a reproduction of the entire work on its SSL website.

The new work compares the color fidelity metrics relative to a much larger sample of LED sources than have been considered before. The list includes: 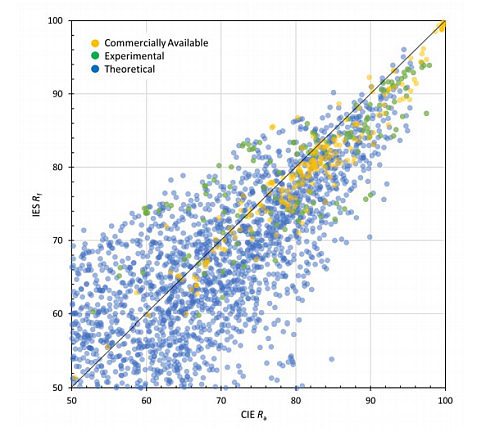 In the case of the commercially-available sources, the tests revealed a high degree of correlation between CIE Ra and IES Rf (shown above). But the other sources tell a different story. Sources with an Ra value of 80 were found to range in IES Rf values from 50 to 86.

Of course, one could argue that the commercially-available sources are what really matters. That sample set is dominated by fluorescent, incandescent, and high-intensity discharge (HID) lamps, along with LEDs based on relatively-simpler phosphor compositions.

But the LED industry is increasingly seeing novel approaches to phosphor converted LEDs, such as SunLike from Seoul Semiconductor that uses a three-phosphor mix for a more uniform SPD including more energy in the red region. And Soraa has long used a three-phosphor mix with a violet emitter that it calls VP3. CRI Ra will penalize such sources for rendering more saturated reds — a preferred outcome in most cases.

The DOE research suggests that a proper fidelity metric must take into account the gamut shape of an SPD. Moreover, the DOE states that gamut area and shape should be varied along with color fidelity in “psychophysical experiments exploring the relationships between human subjective evaluations and measures of color rendition.”

And it appears that the CIE may be warming to the idea of a two-metric system. The DOE paper details the work behind the new CIE Rf fidelity metric defined last year in CIE 224-2017. In many ways, the CIE work correlates with the IES work. The biggest different comes in scaling factor with the CIE trying to align its Ra and Rf metrics. Even with the different factors, values for the DOE-tested sample sources were very close. And the IES will consider adapting its fidelity metric to align with the CIE.