In partnership with a German utility, the Austrian vendor is also cutting the factory’s energy use. No data gathering, though. Just illumination and savings. 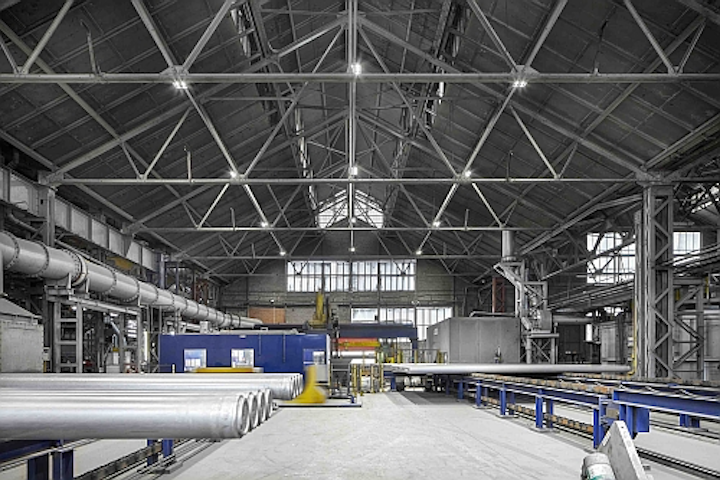 In partnership with a German utility, the Austrian vendor is also cutting the factory’s energy use. No data gathering, though. Just illumination and savings.

Zumtobel Group has served another reminder that lighting-as-a-service (LaaS) contracts do not have to wade into the adventurous new world of using lights as data-gathering nodes in Internet-connected lighting networks, but can focus more simply on illumination and energy savings.

Interested in articles & announcements on lighting as a service?

The Dornbirn, Austria company, together with German power utility Vorarlberger Kraftwerke AG, has signed a 6-year LaaS contract with German aluminum company Aluminium GmbH Nachrodt (AGN) to guarantee lighting levels of between 200 and 400 lx at AGN’s aluminum bar factory near Dortmund. The arrangement is also expected to save 40% on energy bills.

AGN is not purchasing the 400 new LED lights. Rather it is paying a monthly fee. Zumtobel declined to reveal the amount.

Zumtobel said the 200–400-lx range represents a “doubling of luminous intensity” over the previous metal halide lamps, which used hydrargyrum quartz iodide technology (at one point associated with Osram).

Lead contractor Vorarlberger is responsible for the lighting operations. Zumtobel — through the NOW unit of its Zumtobel Services Group — planned, designed, and switched on the layout of around 400 LED luminaires across eight production halls spanning around 81,000 ft2.

Zumtobel is also responsible for yearly maintenance of the lighting, including yearly inspections and replacement of any faulty luminaires. The company installed some 300 Tecton continuous-row luminaires, as well as a number of Craft LED high-bay luminaires and Scuba LED moisture-proof luminaires. It also replaced the emergency lighting system. 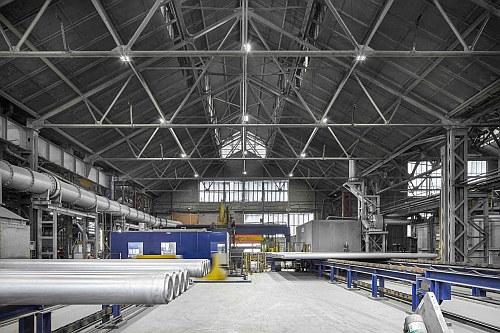 One of eight production halls at the AGN facility in Germany. Zumtobel is setting lighting levels at between 200 and 400 lx, depending on the needs of the different halls. (Photo credit: Zumtobel.)

For controls, Zumtobel installed its Dimlite system for the production lights, and its eBox system for emergency lighting.

The lighting-and-energy centric service deal is similar to a 5-year LaaS Zumtobel job at the Faigle Kunstoffe GmbH plastics factory in Austria.

While many lighting industry vendors see a huge opportunity in wedding new lighting-based data collection and analysis schemes to LaaS business models, the Faigle and AGN jobs demonstrate that end users in some cases might want to walk before they run with LaaS, and settle for more rudimentary LED lighting benefits.

A rash of management changes has recently broken out in the lighting industry. At Zumtobel, CEO Ulrich Schumacher last month offered to resign, and last week the company slashed its profits forecast. Philips Lighting has replaced the head of its Americas group, and LEDvance has replaced its CEO.

More industry shakeups could be coming soon, as GE shops its Lighting and Current groups, and as Philips Lighting, the world’s largest lighting company, prepares to announce its fourth-quarter results tomorrow.