The elusive “life” of LEDs: How TM-21 contributes to the solution (MAGAZINE) 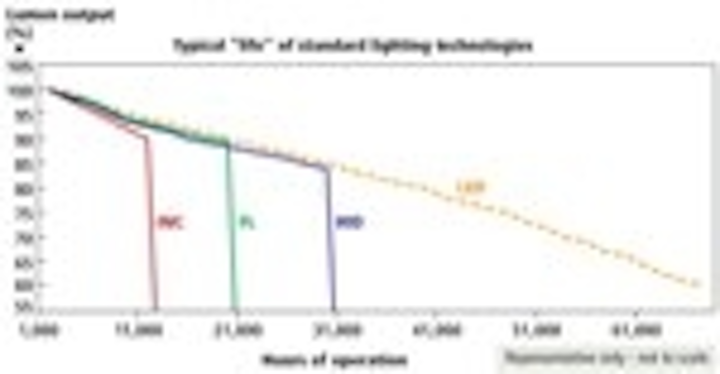 In August 2011, the Illuminating Engineering Society (IES) published the TM-21 document entitled “Lumen degradation lifetime estimation method for LED light sources.” TM-21 is the IES-recommended method for projecting lumen degradation of an LED package, array or module based on data collected according to LM-80.

The lighting community expects TM-21 to become the standard method for projecting useful LED lighting product life at realistic operating temperature. This article presents the development process behind TM-21, and clarifies how and when to apply the lifetime extrapolation method to arrive at reasonable and useful estimations.

We are all familiar with the very real but sometimes exaggerated long-life attributes of LED technology. Not the least of these is the potential for very long life that helps make it an attractive design choice. The trick has been and continues to be how to measure or estimate this longevity to provide assurance to users of this technology’s reliability (life) compared to other options. We also understand that the overall reliability of a complete LED lighting fixture can be affected by the reliability of individual product components (driver, lens, etc.) and should be accounted for in lifetime estimations.

The useful life of standard lighting technologies is defined as the time to filament or cathode failure. For most of these lamps, the time period prior to failure exhibits acceptable levels of light output, as shown with the solid lines in Fig. 1. This makes it easy to determine when to replace the lamp.

However, LEDs do not have filament burn-out that conveniently announces the end of life (dashed line in Fig. 1). Further, the rapid development of the technology and the desire to bring products to market in a timely manner does not allow for actual testing verification of the long lives claimed (100,000 or even 35,000 hours). As a result, the industry has come to accept a definition of the end of the useful life of an LED as the point when it no longer provides a specified level of light output.

And finally, the life and performance of LED lighting products depends greatly on excess heat retained at the diode. This is why LEDs require testing at multiple temperatures such that when a source is installed in a luminaire, its actual operating temperature can be measured and lumen depreciation of the product can be derived.

Therefore, to serve the solid-state lighting industry, the Testing Procedures Committee (TPC) of the IES proceeded to develop appropriate tests for use in rating LED product longevity. The initial need was a measure of the basic lumen degradation of LED source components identified by a module, package, or array of diodes and this came in the form of LM-80. Importantly, LM-80 only specifies how to measure lumen depreciation to a minimum of 6000 hours (but recommends testing to 10,000 hours or longer). LM-80 stops short of using that data to estimate any depreciation after that, which is where TM-21 comes in.

The TM-21 working group (WG) as part of the IES TPC was formed to develop the lumen depreciation projection method and spent over three years exploring many options. The WG evaluated various projection options starting with an analysis of various mathematical, engineering-based models to provide effective depreciation fit and a useful projection method.

This analysis showed that the LED lumen depreciation trends often change after 6000 hours in one way or another and there is no reliable and consistent approach to predict such trends from 6000-hour data points. Even a 10,000 hour stream of data is often not sufficient to provide rigid statistical confidence in an extrapolation of a decay curve out to large numbers such as 35,000 hours.

In addition, the LED industry understands that degradation associated with effects other than the diode itself tends to manifest earlier in life rather than later. The WG concluded that the most reasonable approach to extrapolation of lumen degradation was to avoid using any initial variable data. This initial data variability is commonly associated with an early rise in output followed by the eventual decline, identified as a hump in the data. Instead, by utilizing a fit to the later data streams (Figs. 2 and 3), a more accurate representation of the product’s lumen degradation curve is obtained.

First, TM-21 does not determine a traditional life or time-to-failure like we are used to for other lighting sources.

What TM-21 does provide is a projection of the lumen maintenance of an LED source (package/array/module) based on data collected according to LM-80. This projection information can then be used to project the expected lumen degradation of the light source as part of a complete system (fixture). It is important to note, however, that TM-21 is not a complete lifetime estimation tool.

TM-21 does make use of all data provided in an LM-80 test format. LM-80 requires 6000 hours of data at 1000-hour increments, but the TM-21 WG determined that longer streams of data and data taken at shorter intervals (less than 1000 hours) will provide for a better estimate. The methodology first normalizes the provided data to 1 (100%) at 0 hours and averages each point for all samples of the device for each test condition (temperature).

The method then applies an exponential least-squares-curve fit to the data:

B = projected initial constant derived by the least-squares-curve fit;

This process can accommodate any user-identified level of light output (i.e. L70 or L50). If the desired light output level is reached during the course of LM-80 testing, then that time value is reported.

During the development of the method, it became clear that limited 6000-hour data can produce mathematical results that are not necessarily rational or believable. For example, flat or increasing delay curves would be unreasonable for LED products. Clearly, reasonable limits on predictions are needed.

The WG analyzed 40 sets of data to determine model-fit uncertainty and its relationship to prediction limits. The recommended extrapolation limits are:

• For a sample size of 20 units, the maximum projection = 6× the test duration

TM-21 also provides for interpolating between test data curves to determine the actual degradation characteristics the product will exhibit when installed in a fixture where heat conditions will change. When the in-fixture measured temperature is within the LM-80 test temperatures (55°C, 85°C, and manufacturer chosen), then TM-21 prescribes the use of the Arrhenius equation to interpolate between test temperatures. The Arrhenius relationship accounts for the temperature effect on decay rate constants, which is critical for temperature-dependent LEDs.

For instance, Table 1 presents an example of an extrapolation with an in-fixture temperature of 70˚C with the graphic results in Figure 4. Extrapolation outside of LM-80 test temperatures is not recommended or supported. The TM-21 document provides a nomenclature for results to provide uniform reporting between products. The general form is:

p = the percentage of initial lumen output that is maintained

L70(4k) = 4400 hours represents results at a value reached during testing.

The methodology is provided in the TM-21 document as formulas and procedure but can be developed into spreadsheets or other software-tool formats. The method can also be misapplied in software programs, so a set of examples is included for users to check the results.

Where does TM-21 fit in the industry’s characterization of LED life?

TM-21 is the result of extensive analysis and it presents a realistic method of projecting lumen maintenance of LED packages, arrays and modules in actual operating conditions. However, diode lumen degradation over time is only one of many possible LED-product-degradation mechanisms. The industry is seeking to better understand component reliability metrics such as driver life, and the effect on lighting product performance.

The TM-21 document may be applied in various ways. It can be used by laboratories, manufacturers, or others as defined by the program or organization requiring its application. TM-21 data can be requested as part of LM-80 testing or applied by the manufacturer of an LED product. TM-21 is expected to achieve widespread use by organizations and program certifications (e.g. Energy Star) as part of their required documentation of performance.