Artist Jim Campbell designed the “Day for Night” façade lighting project to provide a visual diary of the city of San Francisco that’s visible from as far as 20 miles away in all directions. 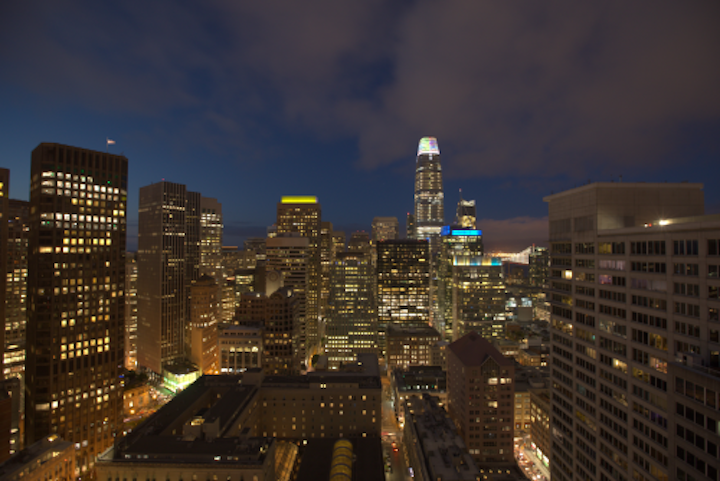 Artist Jim Campbell designed the “Day for Night” façade lighting project to provide a visual diary of the city of San Francisco that’s visible from as far as 20 miles away in all directions.

The tallest public art installation in the United States is now live, comprising the top six floors of the new Salesforce Tower skyscraper in San Francisco that is one of the two tallest buildings on the west coast of the US. Local San Francisco artist Jim Campbell, represented by Hosfelt Gallery, designed the LED-based dynamic artwork entitled “Day for Night.” The 11,000 LEDs said to comprise the solid-state lighting (SSL) project will deliver dynamic but soft lighting and animations that are meant to evoke the culture and pace of the city.

Often referred to as architainment lighting, large-building façade lighting projects are always interesting in terms of both the inspiration behind the project and how that inspiration was realized. For example, we covered a project atop the crown of the John Hancock Center in Chicago last year that placed LED lighting in window frames inside the building.

Campbell wanted to top the Salesforce Tower with subtle but still impactful lighting, and relatively-low-resolution video was integral to the concept. Indeed, the project included Campbell placing cameras at strategic spots around San Francisco capturing scenes that can be displayed on the project façade. You can see a video down below illustrating the effects the installation can achieve.

Still, Campbell was not looking to implement a bright video display such as you might see in many city centers mounted on buildings. Such dynamic screens face the LEDs outward and directly emit bright light. Instead, Campbell devised a way to mount the LEDs facing toward the building so that viewers see softer, indirect light. 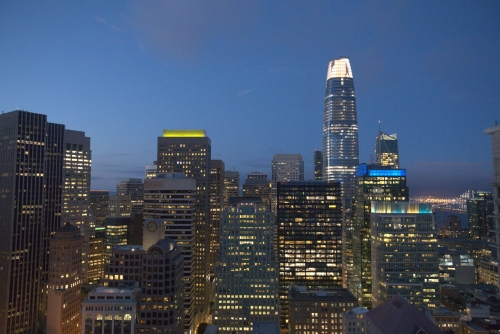 These still images of the “Day for Night” façade lighting project really don’t do the display justice, but they do give a sense of how the 11,000 individual pixels can deliver a variety of lighting effects and animations. 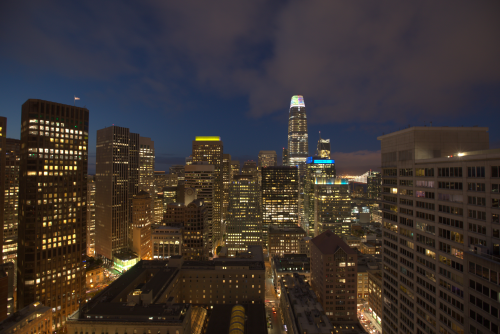 “The sculpture is a visual diary of the San Francisco community, and just like life in the city, every day will be different,” said Campbell. “Unlike a jumbotron that projects outward, this piece is a soft dreamscape that subtly floats on the night skyline, playing back the crashing waves on the beach, the rolling fog, boats on the bay, street scenes, or the rising and setting sun.”

We had asked for more details as to the type of SSL products used in the façade lighting project and how they were constructed. A spokesperson for Hosfelt Gallery said the 11,000 individual pixels that comprise the display are Osram LEDs that were integrated in custom housings and that use custom driver electronics.

It appears the pixel LEDs actually are from LED Engin, a company that Osram acquired about one year ago. LED Engin integrates LED chips from Osram Opto Semiconductors and other manufacturers into multi-emitter arrays that target a variety of specialty applications, including façade lighting. In the case of Salesforce Tower, the project utilizes the LZ4 packaged LED that has a flat lens and that integrates RGBW (red, green, blue, and white) emitters or individual LED chips.

“Over the past four years, we’ve been working with Jim to provide the right lighting solutions for various art projects,” said David Tahmassebi, CEO of LED Engin. “Based in the San Francisco Bay area ourselves, we’re particularly excited that he selected our LZ4 RGBW flat-lens emitters to help create his ‘Day for Night’ installation as it is a unique work of art that our local community will get to enjoy on a daily basis.”

The building is owned by the partnership of Hines and Boston Properties. And Boston Properties has a history of supporting novel LED art projects in commercial buildings. For example, we recently covered a dynamic and interactive LED project in the lobby of an iconic Boston, MA building.

The team behind the San Francisco project, meanwhile, clearly believes that it will become one of the truly iconic architectural sights around the globe. “The Eiffel Tower was a product and symbol of its time — an era of enormous advances in engineering and technical possibility,” said Todd Hosfelt, founder and principal of Hosfelt Gallery. “Likewise, ‘Day for Night’ is a reflection of the importance of digital technology and San Francisco’s place in that culture and economy. Campbell’s piece atop the Salesforce Tower will not only be an icon of the San Francisco skyline, it will come to be a symbol of this place, at this particular moment in history.”

Connectivity and smart lighting remained a theme at the Street and Area Lighting Conference, but Maury Wright reports that outdoor light quality and protection of the dark sky were the more compelling topics at the 2018 event.
Maury Wright
Nov 27th, 2018

Based on LED or legacy sources, a DLP-based light-projection system offers many advantages over mechanical system such as GOBOs, and Brandon Seiser and Zhongyan Sheng discuss all the functional elements that comprise such a system.
Sep 12th, 2018