An AC-driven OLED could open the door to a simplified system design without the need for a driver, which in turn could offer advantages for OLED luminaire makers. 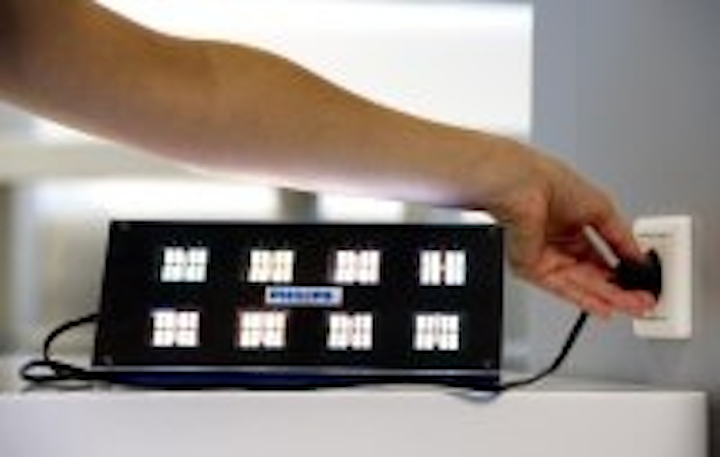 Scientists from Philips Research in Aachen, Germany, have developed a organic LED (OLED) module that can be powered directly from a mains electricity supply. The prototype opens the door to OLED systems that can be directly plugged into standard power outlets without the need for bulky power management circuitry. This will reduce the bill of materials and simplify luminaire design for future OLED-based systems aimed at mass-market general illumination applications.

However, the physical characteristics of OLEDs mean they are conventionally powered from low-voltage, direct-current (DC) sources. In contrast, the Philips white-light module is powered by an alternating-current (AC) source, allowing it to be plugged directly into a mains wall socket.

“We have combined proprietary interconnect and packaging technology to create this demonstrator,” says Dirk Hente of Philips Research. “We’re already seeing AC-driven LEDs coming onto the market. Our prototype marks a breakthrough step towards a similar evolution in OLEDs.”

Although there are a small number of examples of LED components, modules and lamps that are directly driven by an AC source, without requiring AC-to-DC conversion, there has not yet been an extensive switch-over to AC-LEDs.

For OLEDs, eliminating the need for driver electronics could bring many advantages for luminaire manufacturers, says Philips. Because it reduces the number of components in a finished system, an AC-OLED makes system integration and assembly simpler, improves end-product reliability and enables faster time-to-market. Moreover, it increases design freedom and expands the range of potential OLED applications.

Philips Research developed the AC-powered module in collaboration with Dipl.-Phys. Holger Spahr, Institut für Hochfrequenztechnik, TUBraunschweig, Germany as part of the TOPAS 2012 project. Funded by the German Federal Ministry of Education and Research (BMBF), this project brings together leading industrial and academic organizations to develop OLEDs for lighting systems of the future.

Philips has a variety of (DC-driven) OLED modules in its Lumiblade range. The company describes the illumination produced by OLEDs as “calm, glowing, diffuse, and non-glaring.” The thin, flat nature of OLEDs makes it possible to create light sources of a wide variety of shapes and sizes. Also, they can produce many different colors as well as whites, including the kind of white light people appreciate from traditional light sources. This could make them an attractive option for general illumination.