A three-year demo wraps up, and, after some lessons learned, scores a respectable 6 on a scale of 9. Still not ready for primetime, though. 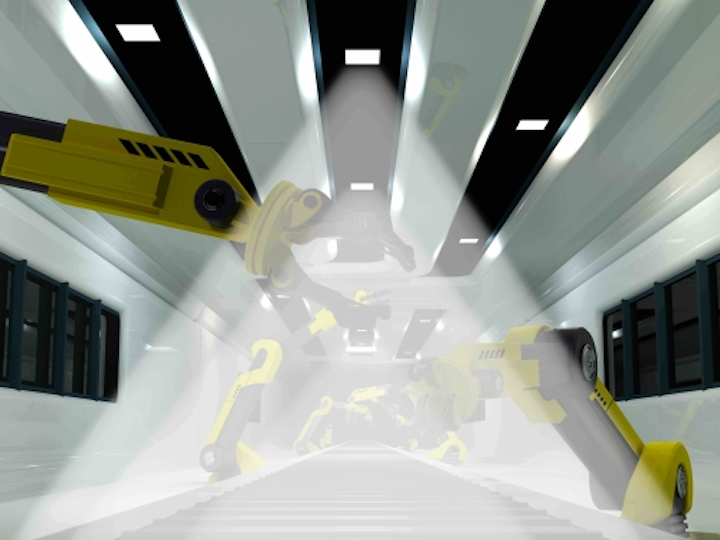 A three-year demo wraps up, and, after some lessons learned, scores a respectable 6 on a scale of 9. Still not ready for primetime, though.

BMW has completed a three-year test using LED light to transmit automobile inspection information to and from a factory floor robot and the results are in: After a few changes including deploying infrared LEDs in place of originally announced visible light, the system performed remarkably well, but it’s not quite ready yet for prime time.

The long-gestating technology, known in general as Li-Fi, uses lightwaves rather than the radio frequencies of Wi-Fi to provide two-way data transmission. Li-Fi proponents say that one of its main advantages will be to open up far more spectrum for wireless Internet use, where saturating radio frequencies often lead to signal clashes and poor reception. Wi-Fi on factory floors such as BMW’s can be very susceptible to interference.

Li-Fi works via visible light such as that emitted by ceiling luminaires, or via infrared, an invisible portion of the light spectrum.

When BMW partner Fraunhofer Heinrich Hertz Institute first announced the factory floor trial over two years ago, it indicated that the system would use visible light. Such an approach puts light to work both in its conventional role of illumination and in a newfangled role as a data conduit.

Somewhere along the way, though, the project began deploying infrared LED chips instead of visible LED light. 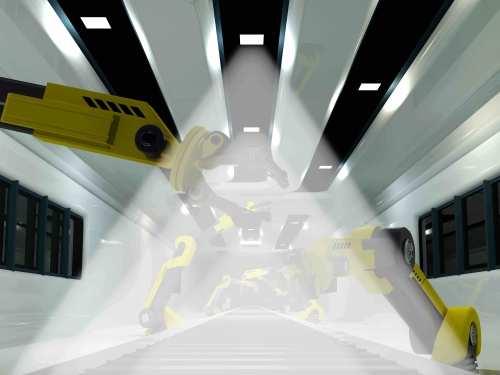 What’s wrong with this picture? This is the image that Fraunhofer provided when it announced the Li-Fi project over two years ago, indicating it would use visible light. However, the Li-Fi demo at BMW used infrared LEDs.

Li-Fi, be it visible or infrared, could serve all sorts of settings including residential, commercial, and, as in the BMW trial, industrial.

BMW worked with Berlin-based Fraunhofer, with Munich-based lighting giant Osram, and with others in outfitting a roughly 5×5m (around 16×16 ft) factory floor cell so that a robot working on auto body construction could communicate inspection information.

One concern with Li-Fi systems is that they require a line of sight between the light and the receiving object, be it a robot, a laptop, a smartphone, or whatever. To ensure this, BMW and its development partners used multiple light transceivers, mounting six transceivers on the robot arm, and eight on the safety barrier that surrounded the robot’s area.

Whether this “multiple-input multiple-output” (MIMO) architecture was part of the reason for using infrared chips rather than ceiling luminaires is unclear (details are still emerging, and LEDs Magazine hopes to provide an update; it’s possible that the ceiling luminaires were too high above the robot for effective communication). But according to Fraunhofer project coordinator Volker Jungnickel, the MIMO topology worked.

Still, in the trial’s early days, data signals were not stretching across a wide enough portion of the optical beams, which undermined the reach of signals.

“This limitation was overcome by a new LED driver which enables modulation of a larger fraction of the light with data,” Jungnickel said.

Another initial problem was that the lag time — latency — in data’s arrival was unacceptably long. Jungnickel credited Carlsbad, CA-based firm MaxLinear for helping to crack that problem.

“Ninety-five percent of industrial applications can be covered if latency is below 5 ms,” Jungnickel said. “The communication chipset used initially did not allow such low latency values reliably. There were peaks up to 20 ms because the data transport protocol was not suitable. We have changed the chipset and used a newer standard for home networks, which is far better optimized for low latency required in industrial communications.”

So, with such advances, how would Jungnickel rate the state of the system?

“The aim in this research project was to increase the technology readiness level [TRL] of Li-Fi in the production environment,” said Jungnickel. “In the test we have reached TRL 6 out of 9 for the first time. For using Li-Fi across the entire plant, of course, TRL 9 would be needed. This is the final goal before companies like BMW can use the technology. We are a good way towards enabling this.”

While the system was used to transmit inspection images from the robot back to BMW engineers — the eight transceivers on the safety barrier communicated with a central BMW data server — it is also capable of sending manufacturing instructions to robots.

BMW has not indicated whether it plans to continue to develop the technology.

The BMW pilot was called the “Optical Wireless Networks for Flexible Car Manufacturing Cells,” (OWICELLS) and was part of a broader development initiative funded by the German Federal Ministry of Education and Research aimed at advancing wireless communications in industry. The government group provided OWICELLS with €1.6 million ($1.86 million).

Fraunhofer has not limited its Li-Fi to non-visible light. For example, a high school in Stuttgart is using a prototype Fraunhofer Li-Fi system to transmit lessons to students from ceiling luminaires in classrooms.