Cree added to its LMH2 LED module family with an 8000-lm product intended to enable luminaires for high-ceiling applications, and also announced that it hit the 300 lm/W efficacy level with an LED in an R&D environment. 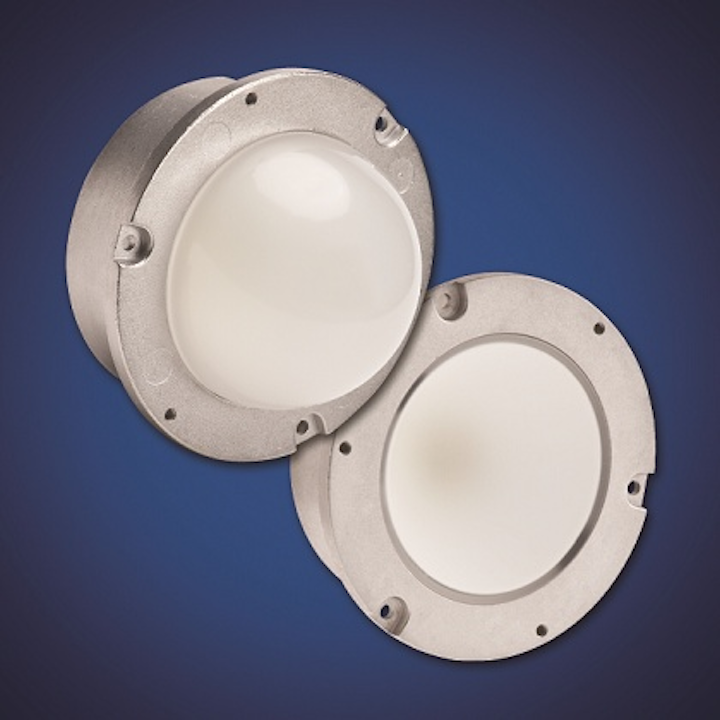 Cree has announced a new LED module in the LMH2 family that can deliver 8000 lm and replace 150W ceramic metal halide lamps (CMH) in applications such as high-ceiling areas. Cree is demonstrating the new module along with other LEDs and solid-state lighting (SSL) products at the Light+Building (L+B) trade fair taking place in Frankfurt. In addition, the company said last week that it achieved 300-lm/W efficacy in an LED in the research lab.

Modules continue to be a popular building block product for luminaire makes that want to accelerate the product development cycle. Indeed, there are many SSL modules on display at L+B. Our recent feature article on the topic further explains the module value proposition.

With the new product, Cree is delivering the light output required to enable a new level of performance in luminaires and some Cree customers are excited about the product. "We can now easily offer our customers better lighting solutions to replace 150W ceramic metal halide lamps in spaces such as convention centers, airports, auditoriums, and shopping malls," said Wesley Johnson, product manager, Hi-Lite Mfg. "The new Cree 8000-lm LMH2 Module allows us to effectively address high-ceiling, high- lumen applications without having to sacrifice color quality or reliability."

Cree said the new module uses 63% less power than the 150W CMH lamp that it is intended to replace. It adds to the family in terms of the high-end range of output, while Cree has also expanded the family recently with options such as high CRI and the dim-to-warm effect in the Sunset Dimming version of the modules.

One of the big advantages of modules for luminaire makers is the ability to design one luminaire and offer a range of lumen packages and features based on the modular light engine deployed in the product. "Having an 8000-lm option in the LMH2 LED Module family gives us the flexibility to create an entire product family from a single form factor," said Chris Roemlein, president of Spectrum Lighting. "Cree's ability to increase the performance of the LMH2 Module allows us to address a wide range of ceiling heights with minimal design investment."

Moving to the packaged LED space, Cree has regularly announced R&D efficacy milestones over the last several years. Generally the company has delivered commercial products two to three years after the laboratory demonstration. In February of 2013, the company said in a Strategies in Light keynote that it had achieved 276 lm/W.

With the latest announcement of a 303-lm/W demonstration, the company once again derived the performance in relatively typical conditions. In other words, the efficacy achievement did not come at an unusually low drive current or high CCT. The mark was set with a 5150K CCT LED driven at 350 mA.

"This is truly an impressive accomplishment," said Steven DenBaars, professor and co-director of the Solid State Lighting and Energy Center at the University of California, Santa Barbara. "Achieving this level of LED efficacy amplifies the potential for the solid-state lighting industry to deliver smaller, lower-cost lighting solutions, and even larger-than-expected energy savings."