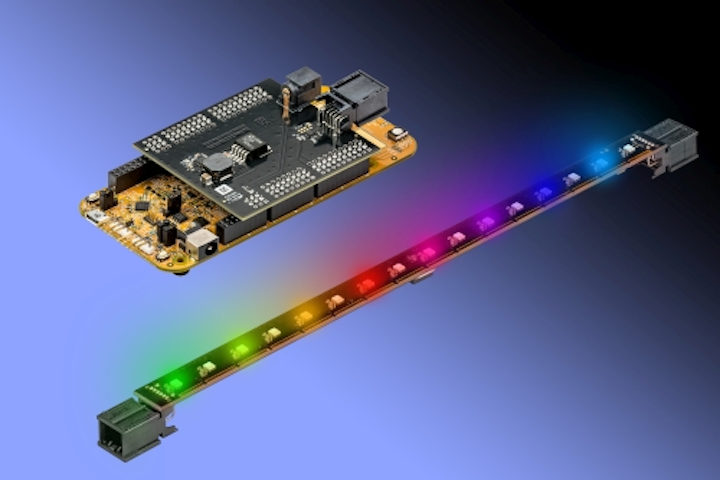 The massive Electronica trade fair ran Nov. 13–16 in Munich, Germany with the exhibits spanning seventeen halls at the Munich Fair. Much of the attention was focused on the general semiconductor industry, although Electronica also hosted an LED Trends forum and a number of companies exhibited LED-centric products and technologies. Osram, Maxim, Infineon, Everlight Electronics, Inova Semiconductors, and Instrument Systems were notable exhibitors with a solid-state lighting (SSL) angle and the most prevalent application area evident in the exhibits was automotive lighting.

Osram Opto Semiconductors had perhaps the most-diverse and largest set of LED-centric demonstrations at Electronica, and of course it was a hometown event for the Munich-based company. Demonstrations spanned baseline LED technology and new chip-scale package (CSP) LEDs to horticultural and human-centric lighting to the aforementioned automotive sector.

“We are proud that many of the brightest and most passionate developers in optoelectronics work for our company,” said Martina Opitz, head of fairs and events at Osram Opto Semiconductors. “Their enthusiasm combined with our technical know-how are the basis for the pioneering innovations that we will be able to present at this year’s Electronica. We see light-based solutions as a spectrum of infinite possibilities — this is what drives us every day. This year, we will be showing some of the latest developments in the sectors [for] automotive, connection, safety and security, mobility, and wellbeing and health.”

In the automotive area, the company demonstrated the dynamic, color Osire E4633i LED module for interior cabin lighting that we covered at launch a month back. Indeed, the ISELED Alliance technology behind the Osram module was prevalent at Electronica and Inova Semiconductors, which drove the creation of the alliance, exhibited at the fair. Magna/OLSA, Melexis, and Microchip Technologies are new ISELED Alliance members that were announced at the fair. And Inova demonstrated an evaluation kit for the technology. 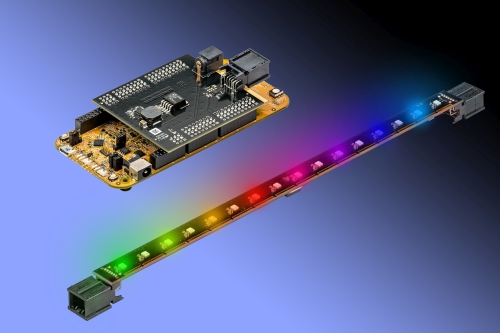 But Osram’s automotive demonstrations went far deeper and included its SPL DS90A_3 laser technology that can enable lidar (light detection and ranging) systems. As we covered in a feature article a few years ago, lidar can enable precise ranging by measuring time-of-flight of focused light reflected off a moving object. And the technology will be a critical element in many autonomous vehicles.

Osram’s exhibits also featured its infrared (IR) LED technology that it calls IREDs. Applications including biometric identification. And in the automotive space, Osram demonstrated how IREDs can monitor the level of attention a driver is paying to the road for safety.

Moving to SSL system design, both Infineon and Maxim demonstrated new LED driver IC technology at Electronica. And in both cases, the ICs were intended specifically for automotive SSL applications.

Infineon announced the Litix Basic+ family with six separate devices that support one to three LED channels or strings. The ICs were designed with an emphasis on reliability. LEDs connected in series can result in complete system failure should one component fail in an open-circuit state. And even short-circuit failures can pose challenges tor reliable operation.

The Litix Basic+ design monitors a channel for open-load faults and for short-circuit to ground faults. The devices also include an Active Retry feature that allows the controller in a driver circuit to cyclically scan the LEDs and possibly automatically restart a channel that had a temporary fault condition occur.

Maxim, meanwhile, introduced a driver IC intended for matrix-style headlamps with adaptive drive beam (ADB) technology. Matrix headlamps came into the market in high-end Audi vehicles back in 2013 and have subsequently been adopted in numerous vehicles including in North America after initial regulatory delays.

At Electronica, Maxim unveiled the 12-switch MAX20092 matrix manager. The company said the new ICs allow the use of higher-current LEDs resulting in more-flexible and smaller-footprint designs. Maxim further said the IC will simplify the required thermal cooling elements of an LED headlamp system.

LED manufacturer Everlight Electronics also demonstrated some matrix products at Electronica. The company has developed an ADB reference design in the form of a module that uses LEDs made by Everlight. That module design was undertaken in partnership with some automotive OEMs. 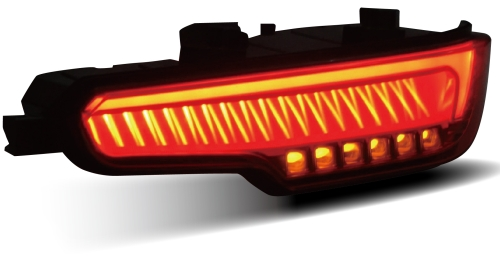 Everlight’s Smart Multi Array Rear Lamp made an appearance among the automotive lighting products at Electronica.

Everlight further demonstrated a Mini Rear Lamp design and a Smart Multi Array Rear Lamp design. The reference designs will support the development of brake lights, turn indicators, and other rear lamps. The modules also include innovative optics that can improve visibility and uniformity. 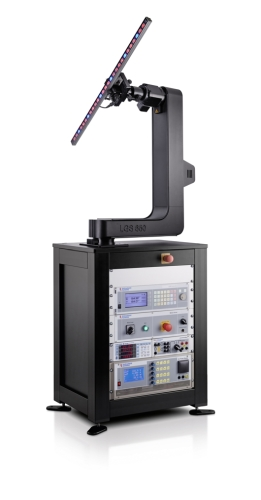 The LGS 650 goniophotometer from Instrument Systems delivers full characterization of SSL components or lighting end products when combined with a spectroradiometer.

Instrument Systems, another hometown Munich company, used Electronica to debut its latest goniophotometer — LGS 650. Combined with a spectroradiometer such as the CAS 140CT-HR, the LGS 650 enables accurate measurement of color coordinates, color rendering, color temperature, and magnitude of light source output, all relative to angle. Instrument Systems said the new system delivers a relatively low-cost option for characterizing sources up to 1300 mm in diameter.