EZ-Color microcontrollers from Cypress can be programmed without coding using a software interface tool, and use a new signal modulation technology. 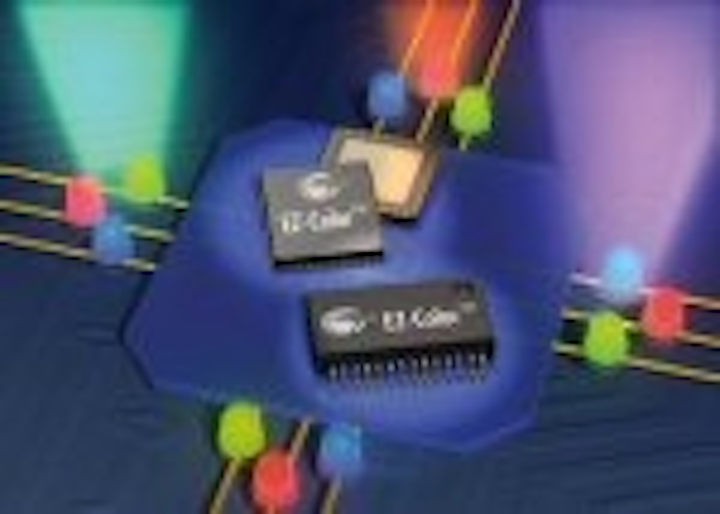 Cypress Semiconductor, a leading mixed-signal semiconductor manufacturer, has launched a new range of microcontrollers for LED-based intelligent lighting designs, accompanied by easy-to-use software that is intended to significantly reduce the system design time.

The new EZ-Color family of HB-LED controllers is supported by PSoC Express, an embedded visual design tool that allows the microcontroller to be programmed without having to carry out manual coding.

Cypress has also developed and implemented PrISM (Precise Illumination Signal Modulation), a new control technology that is an alternative to pulse-width modulation (PWM).

LED design requires a complex set of calculations to deliver constant color. The two biggest issues, says Cypress, are LED manufacturers' binning schemes, which are used to classify performance characteristics of different LEDs, and the variation of LED output (output flux, wavelength) that occurs when the LED temperature changes.

Within the PSoC software, the user identifies the LED bins selected for the design. A drag-and-drop facility enables the user to select a color from a chromaticity diagram presented on screen. Using the pre-loaded LED bin specifications and temperature feedback algorithms, the software calculates the parameters necessary to achieve the identified color, and programs the EZ-Color controller. This can save weeks or months for a complex design.

At present, the software only contains specs for LEDs from Lumileds, but details of other manufacturers' products will be added soon, says Rajiv Nema, senior global marketing manager for Cypress. The new product was developed in collaboration with Future Lighting, Lumileds' worldwide distributor. Nema also adds that data relating to lumen depreciation (the reduction in LED flux with aging) will be added later in the year.

The EZ-Color controller family can drive up to 4, 8 or 16 LED channels (depending on model), compared with four or five channels for competitive devices, says Nema. This can result in considerable cost, power and space savings in very complex designs.

The EZ-Color controllers are powered by PrISM (Precise Illumination Signal Modulation), a patent-pending technology developed by Cypress that is an alternative to PWM.

As well as its technical advantages, PrISM avoids patent issues related to PWM technology, particularly in the United States where Color Kinetics is concerned.