The Japan-based chip and epiwafer manufacturer has developed a fine-line electrode structure to improve light extraction. 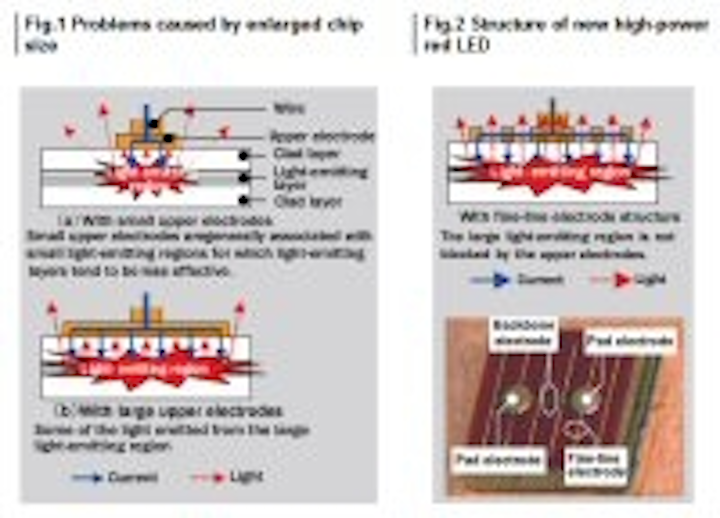 The Japan-based chip and epiwafer manufacturer has developed a fine-line electrode structure to improve light extraction. Hitachi Cable, Ltd. has announced the development of a high-power red LED chip offering a maximum luminous flux of 55 lumens, at a current of 500 mA. This luminous flux was enabled by increasing the size of the LED chip and use of a fine-line electrode structure. One of the methods of improving per-chip light output is to increase the chip dimensions. However, larger chips increase the difficulty in distributing a uniform current across the entire light-emitting layer. On the other hand, if large electrodes are positioned in the upper layer of the chip for a more uniform current dispersion, light from the light emitting layer will be blocked, reducing the light extraction efficiency (see Fig. 1: "Problems caused by enlarged chip size").

By employing fine line electrodes, Hitachi Cable has succeeded in achieving uniform dispersion of current across the entire chip surface without blocking light from the light emitting layer, thus attaining a maximum luminous flux of 55 lumens in a large LED chip measuring 1 mm by 1 mm.

This level of output is equivalent to the combined output of 21 metal-reflector LED chips manufactured by Hitachi Cable. These 0.33 × 0.33 mm chips have an output of 2.6 lm at 20 mA.

Hitachi Cable expects the new LED chip to find applications in display applications, as well as devices such as projectors. The company says it will continue to pursue active development of higher-power LED chips while expanding its lineup of high-power LED chips, including yellow and infrared LED chips.