Emerging high-volume applications such as solid-state lighting and automotive headlights will drive vigorous growth in the LED market, according to Rob Lineback of IC Insights, who has some interesting suggestions for standards development. 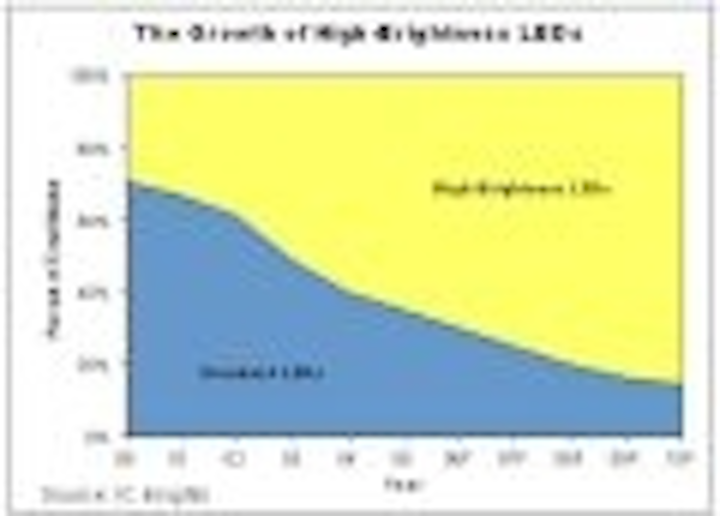 Revenues from discrete LED devices are expected to increase by an impressive 22% cumulative average growth rate (CAGR) between 2005 and 2010, according to a new five-year forecast from IC Insights of Scottsdale, Arizona. This growth will be driven by strong overall unit demand and emerging applications in solid-state lighting, and follows an increase of 15% CAGR in the 2000-2005 timeframe.

Paving the way for this revenue growth is an intensifying race to develop and mass-produce highly luminous white LEDs for indoor solid-state lighting systems. Accelerated developments in compound semiconductor materials and manufacturing technologies have pushed high-brightness (HB) LEDs to the verge of being viable replacements for fluorescent light fixtures and incandescent light bulbs in offices and buildings.

In the first half of this decade, LED growth was primarily fueled by strong unit demand for white LEDs used in display and keypad backlighting in cellular phones and mobile computing systems.

HB-LEDs accounted for slightly more than half of the total LED revenues in 2003, increasing to 70% this year (see Figure 1). By 2010, more than 85% of the world’s LED sales will be generated by high-brightness devices, according to IC Insights’ projections.

Additional LED revenues will be generated by products that are sold as complete assemblies for single- and multiple-digit character displays. These LED-based assemblies are expected to add another $1.6 bn to the overall total in 2010, up from $833 m in 2005.

The current emphasis on replacing existing lighting products with LEDs has had a measurable impact on the rate of technical development over the past half-dozen years, and thus the illumination levels that can be achieved with LEDs.

For nearly three decades (from the late 1960s to the end of the 1990s), the light output levels from packaged LED devices have roughly doubled every two years, based on observations and projections by Roland Haitz (the so-called "Haitz’s Law" is similar to Moore’s Law for transistor integration in ICs). In this decade, however, the rate of doubling has increased from every 24 months to about 18 months.

Projections made in 2005 by the US Department of Energy (DOE) indicate that LED laboratory devices will reach a luminous efficacy of 150 lm/W by 2012 (see Figure 3). In early 2006, Nichia of Japan disclosed a new white-light device that achieves an efficiency of 100 lm/W, a key milestone for HB-LEDs because it matches the performance of today’s fluorescent lighting (although the output is only 6 lm). According to Nichia, this product will be available before the end of 2006.

One serious issue facing the solid-state lighting movement is the lack of standards for measuring the performance of high-output HB-LEDs, in terms of both light output and efficiency. To avoid marketing hype, industry benchmarking standards are also needed to determine when the technology can be said to graduate from a laboratory prototype to a real product.

With sharp price erosion now slowing revenue growth in many existing high-volume applications, HB-LED suppliers will face additional pressures to deal with these issues quickly. Several industry organizations are working on new industry roadmaps and standards for measuring white HB-LEDs. IC Insights believes that the LED industry should consider adopting a milestone-tracking system, similar to the approach taken in the International Technology Roadmap for Semiconductors (ITRS), managed by Sematech.