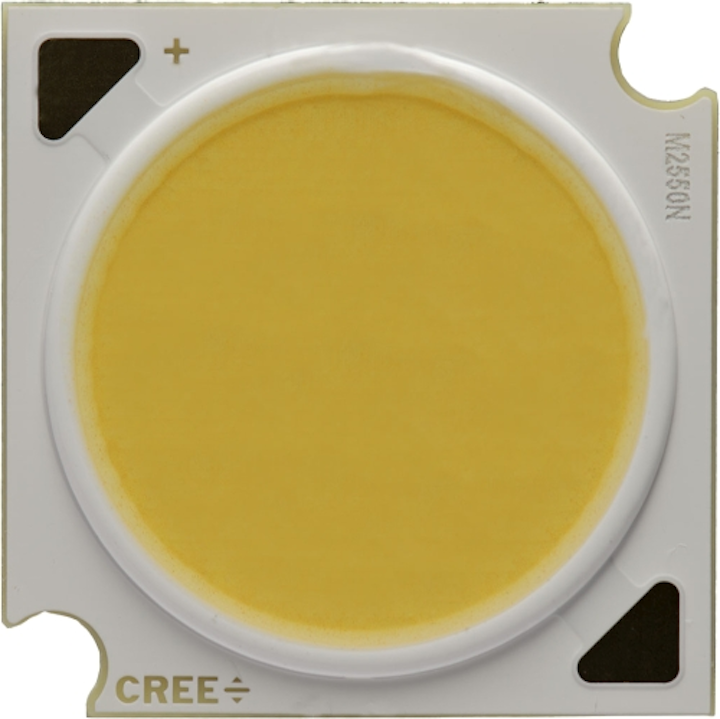 Cree has announced the XLamp CMA family of chip-on-board (COB) LEDs that mark the company’s first foray into such LEDs manufactured on an aluminum substrate as opposed to a ceramic substrate. Cree is informally calling the new line a high-current family and positioning the portfolio to fit between the Standard Density and High Density ceramic-based LEDs announced previously.

Ceramic substrates for COB LEDs generally deliver better thermal performance. The rear surface of a ceramic COB LED is perfectly flat and mates well with other materials and the devices don’t thermally expand. But ceramic-based COB LEDs are brittle. Generally, the devices must be mounted in a luminaire design using a mechanical holder of some sort. 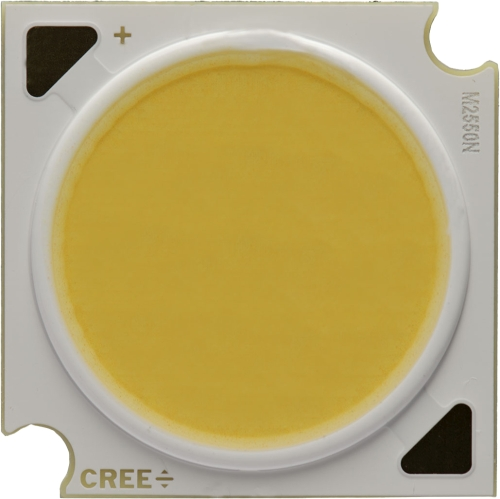 Cree’s newest COB LEDs fill the void for an aluminum-substrate-based COB in the company’s product line.

Metal or aluminum substrates are not perfectly flat. But the finished LEDs are not brittle and can be attached with screws in a luminaire design. The metal, however, can expand with heat so thermal mitigation must be handled with care if the devices are affixed with screws. In general, there are reliable and high-performing COBs from both camps being manufactured and used in lighting products.

For Cree, the CMA line may serve two goals. They now have a product to offer development teams that are insistent on using COB LEDs with metal substrates. And the new family fills a void between two existing product lines.

In terms of fit for the product developer, the CMA family will primarily be valuable as a way to move up from Standard Density products without paying the full price for High Density COB LEDs. The new line covers five light-emitting surface (LES) diameters — 9, 12, 14, 19, and 23 mm. The 12-mm CMA 1825, for instance, delivers a range of 2150–7300 lm depending on drive current, CCT, and CRI. Cree said that in general the performance numbers in terms of efficacy are on the order of 10% higher than second-generation Standard Density (CXB family) LEDs, although the company also said that lumen density can be more than twice what the Standard Density products deliver.

Product developers might leverage the performance advantage in two ways. Teams could convert an existing design to use an LED with a 40% smaller LES and derive the same lumen output. Or teams can upgrade the lumen output in the same LES footprint.

Cree did say the CMA family can use the same optics, holders, drivers, and other components that have been used with the CXA and CXB families. But there will be no shortcut in terms of LM-80 testing based on an evolutionary upgrade of an existing LED, because the CMA is an all-new design for Cree. Full LM-80 data won’t be available until early next year, although that timing may work fine for typical product design cycles.

Still, consistency in mechanics is important. “Cree is an outstanding partner for LED lighting because of their customer-focused innovation,” said Andrea Gallucci, head of optics & electronics at Artemide. “Since the new High Current CMA LED Arrays are compatible with the Standard Density CXA2 LED family, we can easily deliver more visual impact while maintaining the same optics options and color quality choices that our customers are looking for. These new CMA LEDs will speed up the pace of performance enhancements within both our iconic and innovative luminaire designs.”

The CMA LEDs are available across the 2700K–6500K CCT range and at 70, 80, and 90 CRI. Cree will also offer the CMA COB LEDs in what it calls Premium Color options with up to 98 CRI and custom chromaticity points. The company rolled out the Premium Color technology with chromaticities off the black-body locus when it announced the second-generation High Density line last year.