Four-emitter array in the Luxeon MX family of packaged LEDs can deliver 1200 lm for high efficiency in applications such as street lights and other outdoor and high-output-indoor SSL applications. 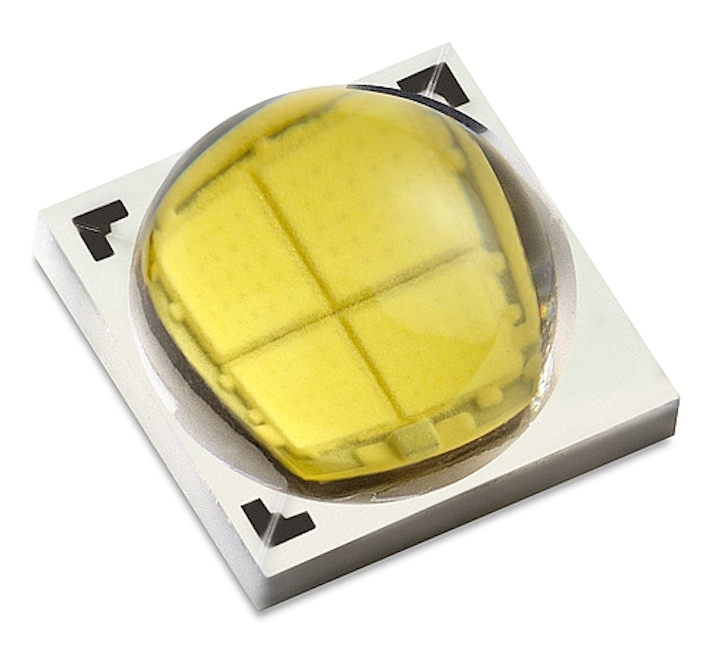 Four-emitter array in the Luxeon MX LED family can deliver 1200 lm for high efficiency in applications such as street lights and other outdoor and high-output-indoor SSL applications.

Lumileds has announced the Luxeon MX packaged LED portfolio that targets high-output applications like street lights outdoors and certain high-bay applications indoors. The LEDs can deliver 150 lm/W efficacy at relatively high drive currents and the array products integrated in a discrete-like, 7×7-mm package have a typical output in the 1200-lm range enabling usage in the target applications.

Lumileds described the new four-emitter products as "shattering efficiency records." That hyperbole may be a bit over the top, but the MX products are among the brightest and most efficient products in what's essentially the largest discrete LED package — approaching the size of smaller chip-on-board (COB) LEDs.

Lumileds said luminaires using the product can achieve system-level efficacy of 120 lm/W and that system performance is what's most important to lighting designers/specifiers. Still, it's the LED technology enabling the performance. "This is double the flux of comparable emitters in 120-lm/W systems," said Seth Danielson, product manager for the Luxeon MX. "We’ve achieved this performance leap by optimizing the LED for improved efficiency at higher drive currents up to 1.5A with the 12V device."

The 12V configuration would place the four emitters in series. Lumileds is also offering 3V and 6V configurations of the LEDs. The higher-voltage version, however, enables relatively lower drive currents to achieve the same power level for the array, and by decreasing the magnitude of the voltage drop from the line to the LED voltage, the configuration enables more efficient driver electronics. And driver efficiency figures significantly in system efficacy. 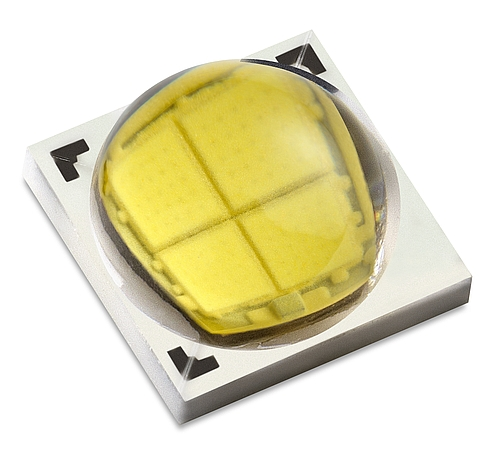 Lumileds points out that the system performance enabled by the new LEDs will enable lighting manufacturers to more easily meet the stringent requirements of the DesignLights Consortium (DLC) qualified products list, especially the Premium level designation of that list. "By creating products eligible for the DLC Qualified Products List, cities and municipalities can receive rebates on their LED street lighting projects, while also realizing the fast return on investment from using the most efficient emitters," said Danielson.

As for other packaged LEDs in the 7×7-mm format, Lumileds has previously offered the predecessor Luxeon M LED that was launched back in 2012. It appears that the MX offers on the order of a 20% improvement in lumen output and efficacy.

The Lumileds MX would appear to trail the Cree Extreme High Power (XHP) packaged LEDs in terms of maximum output, although datasheets from different companies are almost possible to compare given to component characterization at different conditions. Cree announced the XHP70 LEDs back in January 2015 with lower efficacy than the new Lumileds LEDs, but with a greater ability to overdrive the LEDs for higher lumen output. The XHP70 LEDs were announced alongside the 5×5-mm XHP50 LEDs and recently Cree boosted the performance of the latter with the XHP50.2 product reaching 165 lm/W in efficacy.

Lumileds is offering the Luxeon M family across a wide CCT range from 3000K to 6500K. The target application would not typically require warmer CCTs. The LEDs will be available at 70, 80, and 90 CRI. The range of target applications will extend to extreme application such as sports-venue lighting.