Jianzhong Jiao describes the work of IES and CIE committees in formulating testing standards for AC LEDs, including temperature controls and the range of optical measurements needed to characterize the variety of products in the market. 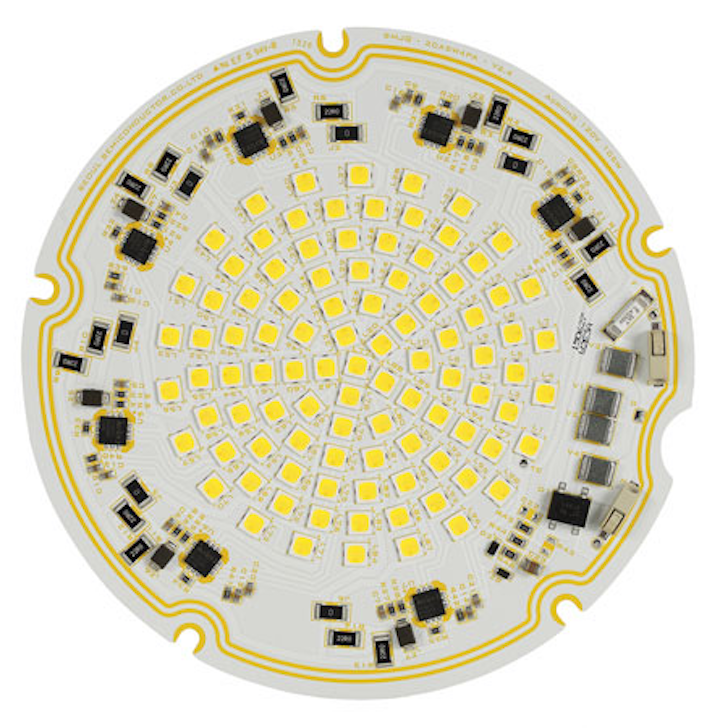 JIANZHONG JIAO describes the work of IES and CIE committees in formulating testing standards for AC LEDs, including temperature controls and the range of optical measurements needed to characterize the variety of products in the market.

LEDs have been broadly adopted in almost all lighting applications. The proliferation of solid-state lighting (SSL) progressed through applications including automotive lighting, traffic signals, display and back lighting, general illumination, and horticultural lighting - with other specialty lighting applications quickly following suit. One LED technology that has gained in popularity is AC-driven LEDs and arrays, which greatly reduce the cost and complexity of the driver electronics. Unfortunately, there has been a lack of standardized testing methods to characterize the AC devices, but new work by the Illuminating Engineering Society (IES) will fill that void.

In the majority of LED lighting applications, the input electric power is from an AC mains circuit. With a DC-driven device, the AC input power must be converted to DC in order to operate the LEDs. A driver that integrates power supply, conversion, and a control circuit often is used to connect LEDs to the AC mains circuit. AC to DC power conversion introduces energy loss and can also add an extra reliability burden.

To eliminate drivers, a string of LED dies can be connected in series so the overall forward voltage can be as high as the mains circuit voltage - for example, 110 VAC or 220 VAC. If one can have two such series-connected LED die strings, then the AC power can be directly applied to the LED die strings; one string operates on the first half of the AC cycle, and another on the second half of the AC cycle. Companies that participate in the AC-LED sector have also devised more complex topologies that improve LED utilization.

With technology improvements, many new LED configurations have been introduced to the market - for example, multiple junction technology (MJT). Using MJT, a single LED die that is developed with a typical epitaxy process is divided into multiple sub-dies or cells - each with its own p-n junction (Fig. 1). These cells can be electrically connected in series and in parallel, so they can be operated at an elevated voltage or be directly connected to the AC mains circuit. Indeed, AC-driven LED packages and LED modules continue to be implemented in lighting products, providing an alternative to lighting manufacturers when developing LED lamps or luminaires (Fig. 2).

Unlike DC LEDs, AC-driven LEDs are designed to operate at a constant AC voltage. How does one measure and characterize this type of LED? Scientists and engineers at the National Institute of Standards and Technology (NIST) and at the Taiwan Industrial Technology Research Institute (ITRI) conducted research and studies, then published several technical papers to demonstrate techniques for performing the needed measurements. In 2010, a working group at the IES Testing Procedures Committee (TPC) was formed to develop the standardized AC-driven LED measurement methods - IES LM-88. In a similar timeframe, a working group at CIE (International Commission on Illumination) Division 2 also formed to develop the technical report for AC-LED characterization.

After five years of hard work, both standard-writing bodies are in the final stages of establishing their documents. According to the IES LM-88 scope, the document “describes the procedures to be followed and precautions to be observed in performing accurate measurements of total luminous flux, total radiant flux, total photon flux, electrical power, luminous efficacy, chromaticity, and wavelength characteristics of high-power AC driven light emitting diodes including white AC LEDs as well as monochromatic AC LEDs. This approved method covers AC-LED packages, remote-phosphor AC-LED packages, and AC-LED modules or arrays. This document covers measurements under single cycle AC operation as well as continuous AC operation of AC-LEDs intended to be driven by an AC power from a 50 Hz or 60 Hz mains supply, and in all cases, the thermal condition of AC-LEDs refers to their junction temperature. This approved method applies to laboratory measurements.”

IES LM-88 is aimed specifically at characterizing high-power AC-driven LEDs. The high-power AC LEDs are those that require a heat sink for their normal operation. In today’s market, most LEDs are in this category. The AC LEDs are operated on an AC power supply without additional external electronics. Similar to a DC LED, the light output of an AC LED depends strongly on its thermal condition, more specifically, the junction temperature. When a DC LED is operating, its forward voltage and forward current are stationary; however, while the AC LED is operating, the voltage, current, and junction temperature all change rapidly. This makes it difficult to measure junction temperature. With more AC-LED products in the market, the standardized methods of measurements can provide producers and users with consistent and reliable means of collecting and using data.

Differences in AC and DC measurements

DC LED characterization performed by the LED manufacturer often uses the pulse method and the measurement usually reflects the LED behavior at room temperature. When LEDs are measured by a user, whether it is an LED lighting product manufacturer or a test laboratory, the LED is usually measured via continuous DC current and the junction temperature is usually elevated. In 2014, the IES published LM-85 for measurement of high-power DC LEDs. LM-85 fundamentally established a bridge between LED makers and users, and linked the pulsed method with the DC current method so the measured results are the same.

This kind of practice is also mirrored in LM-88. AC LED manufacturers normally use a single cycle AC operation when taking measurements. Such measured results usually reflect AC-LED light output at the room temperature condition. As with DC LEDs, AC LEDs measured at user locations are experiencing elevated junction temperatures; and certainly, the LEDs’ photometric and colorimetric values can differ significantly from the values obtained at the room temperature condition. The principle of the method in LM-88 is based on setting the AC LED to a pre-determined junction temperature during its measurement.

To broaden the scope of the standard document and make it more robust, the experts in the working group continued studies and gathered the evidence to demonstrate that the methods recommended in LM-88 can be used for AC-driven LED packages, modules, or arrays. In all cases, an AC-driven LED will have multiple junctions. It has been found, when AC LEDs are operating, each individual junction will quasi-stabilize within a short period of time (in a range of milliseconds). In normal operation conditions, even though each individual junction’s quasi-stabilized temperature may vary, which leads to different levels of light emission, the overall optical property is the same as long as the average junction temperature is controlled to be the same as the AC LED upon initial start-up. Whether it is a single LED die with multiple cells in the case of MJT, or multiple dies integrated into a package, a module or an array, chip on board (COB), surface mount device (SMD) assembly, or other configuration, when measuring the optical properties at a given average junction temperature for all p-n junctions, these measured results can be repeatable and reliable when the average junction temperature is unchanged.

To meet the needs in a wide range of LED applications, such as remote phosphor technology or horticultural lighting, LM-88 also includes, beside luminous flux and chromaticity, the measurements for radiant flux, photon flux, peak wavelength, and dominant wavelength or centroid wavelength.

The second method is to use continuous AC operation. In this method, the active cooling system shall be used in which the DUT is mounted, and it should be set up at the desired junction temperature. When the AC power to the DUT is turned on, the initial current should be noted; it will quickly change due to the junction temperature rise. LM-88 stipulates that the electric power to the active cooling system be adjusted so the LED’s operational current is maintained at the initial level, followed by the optical measurements. Because it is an AC operating environment, there are additional guidelines for the electrical operating conditions. LM-88 also provides recommendations related to the optical and electrical measurement equipment.

As stated previously, the CIE is in the process of establishing a technical report to characterize AC-driven LEDs. Different from IES LM-88, the CIE report “aims to provide a guidance for characterizing optical measurement of AC-driven LEDs for testing laboratories, with emphasis in reproducibility and smaller measurement uncertainties.” The characterization includes the determination of AC LEDs’ electrical, thermal, and optical properties. The document also provides recommendations for operating conditions, measurement conditions, and calibration of the measurement system, as well as the measurement uncertainly.

With the additional effects AC LEDs impose, the IES’s and CIE’s new standard documents will greatly benefit the LED lighting industry. AC LEDs, regardless of the format - MJT, COB, SMD, package, module, etc. - play a role in the modern lighting market. A systematic approach to measure, test, characterize, and report on the products with consistent, repeatable, and reliable results will not only help the healthy growth of the industry but also help regulators and specifiers to use more objective measures to protect users. Building standards is an improvement process. It will have a long-term added value to the community.