Two Japanese scientists have developed technology they hope will one day turn the humble telephone booth into a high-tech chamber for beaming holographic images, according to a report from The Associated Press. 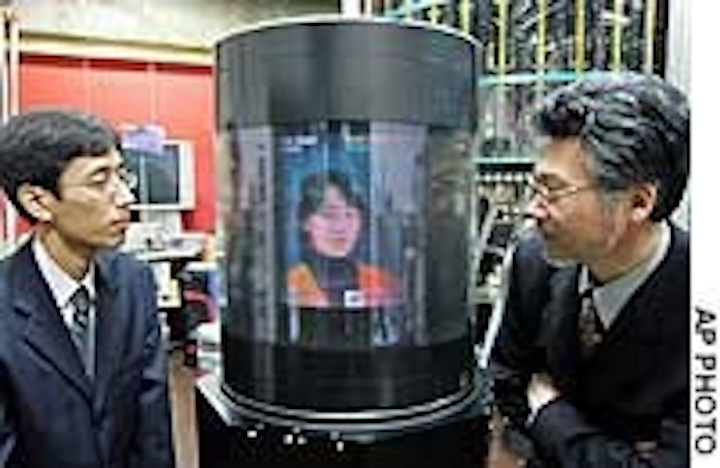 The idea of sending a 3-D hologram was first "used" by Princess Leia to plead for help in the original Star Wars movie. Now, Susumu Tachi and Tomohiro Endo of Tokyo University have developed a cylindrical device - dubbed SeeLinder - that generates 3-D images.

The hologram cylinder combines fiber optics, electronics and white LEDs, and resembles a primitive motion-picture wheel. Inside the cylinder, an outer wheel with vertical slits revolves clockwise at a fast rate. An inner wheel, which moves counterclockwise at a slower speed, is lined vertically with LEDs and projects thin slices of the image. The rapid succession of image slices seen through the slits produces the illusion that the viewer can see the entire image at once, in 3-D.

Several companies, notably Dyanscan in Taiwan, have already commercialized displays visible from all directions, which utilize strips of LEDs rotating at a very fast rate.

The Associated Press story described a demonstration at a Tokyo University laboratory. A woman stood inside a booth where a 360-degree digital camera surrounding her face sent data to the cylindrical tube. Soon, the woman appeared to be staring out from the cylinder. Viewed from the side, only the side of the woman's head was visible, while round the back only her hair could be seen. The image appears to be about eight inches in diameter and 10 inches high.

"We can see the 3-D image as if it's inside the cylinder," said Tachi. "With the device, we can have a family gathering or conference at a remote place."

There are limitations. Looking at the cylinder from above or below doesn't change the image, and the hologram is still fuzzier than modern TV screens. It's also pricey. One cylinder costs $97,100, though Tachi and Endo expect that to fall if the gadget is ever mass-produced.

Endo said they're refining the technology, and given demand, can commercialize their product soon. "We think this can be on the market in the near future," he said. Professor Susumu Tachi (right) of the University of Tokyo and researcher Tomohiro Endo of the University of Nagoya view a 3-D hologram image on their new invention, dubbed SeeLinder, at a laboratory in Tokyo. Source: The Associated Press