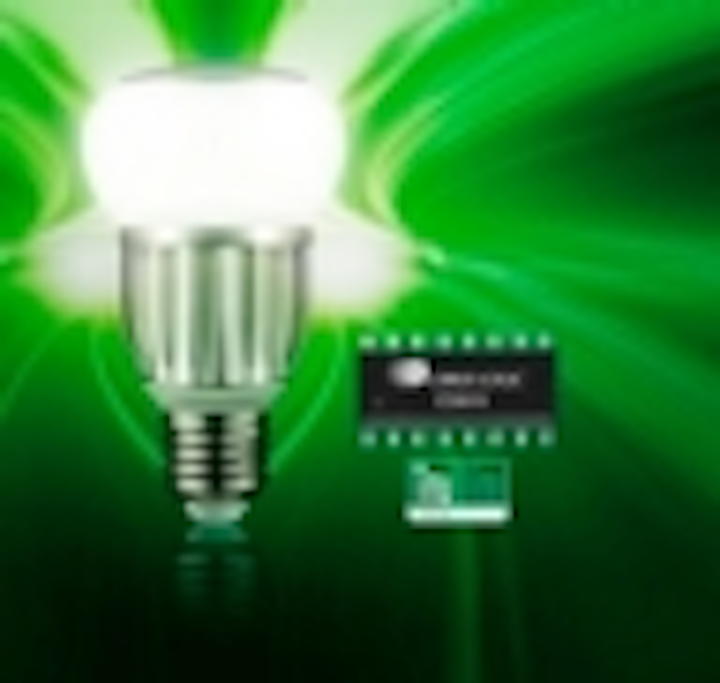 Cirrus Logic is a newcomer to the LED driver IC market, but the company claims it will make an immediate impact asserting that a tier-1 lighting vendor will shortly ship a high-volume, retrofit-lamp product based on the new CS161X IC. The company says that it has tested the 2-stage CS161X solid-state lighting (SSL) driver IC with more than 200 triac dimmers and that the IC delivers smooth, flicker-free dimming down to below 2% of maximum output current.

Cirrus has taken a similar path to Marvell and iWatt in recently-launched dimmers – attempting to recognize the characteristics of the connected dimmer and then selecting an optimal operating mode for that dimmer. Cirrus describes its approach to dimming as a digital implementation in a mixed-signal IC, but evidently the IC is not based on a programmable processor core such as Marvell uses.

The company calls the implementation TruDim Technology. The data sheet describes a dimmer switch detection algorithm that can place the IC in leading- or trailing-edge operating modes. Moreover, once the driver IC is in full operation, the IC performs a dimmer validate function that periodically ensures that the mode selection is still accurate.

In addition to smooth, full-range dimming, Cirrus says that the new design is more efficient than most dimming driver ICs. The datasheet specs efficiency at 85%, but strategic marketing manager Will Draper said that designs have achieved better than 90% electrical efficiency.

In part the efficiency is attributable to a different way of working with triac dimmers. Most dimming-capable SSL drivers maintain a current bleeder circuit that keeps the triac active at all times, but that wastes some amount of power, especially at low dim settings. Draper said "The need for a hold current is conventional wisdom but not necessarily true." According to Draper, the Cirrus design does not transfer power from the triac to the load on every half cycle of the AC line. Draper says that the 2-stage driver design has storage elements that can result in power transfer only on each 9th half cycle.

Still, Cirrus returns to the dimming performance as the key value proposition of the new IC. The company claims to have evaluated the IC in a reference design against several well know retrofit lamps including two from Philips. Presumably the test included operation across the full dimming range and in single-, 5-, and 10-lamp configurations, with the multiple lamps connected in parallel to the dimmer. As you might expect the Cirrus design performed best in class, although the results are pretty meaningless until Cirrus details the exact nature of the tests.

Cirrus has produced a video (see below) that demonstrates the dimming capability. But in all fairness, a number of companies including Texas Instruments, Marvell and iWatt had similarly impressive demos in the Strategies in Light exhibits back in February. The fact is that dimming performance has improved across the board in driver ICs over the past year.

In other recent LED driver IC news, Linear Technology introduced the LT3791 synchronous buck-boost DC/DC driver IC. The design targets industrial, architectural, and automotive lighting applications. The IC operates from a DC input voltage over a range of 4.7V to 60V. When combined with four external MOSFETs, the IC can deliver 5W to 100W of continuous power to a string of LEDs with efficiency as high as 98.5%. A single inductor delivers up to 2A of drive current. The output can implement either PWM or analog dimming.

Power Integrations, meanwhile, has a new reference design based on its LNK460VG driver IC that describes a 100W retrofit A-lamp. The DER-322 reference design describes a circuit that is 93% efficient, and that drives a string of LEDs at 78V with a constant current of 230 MA. The design is primarily targeted at the international market, supporting an input voltage over the range of 195V to 265V. Power Integrations also says that the design can easily be adapted for use in LED-based T8 retrofit tubes.