Ford Motor Company has switched from metal-halide to LED lighting at its stamping plant in Woodlawn, NY, reducing plant-wide energy use by 10 percent. 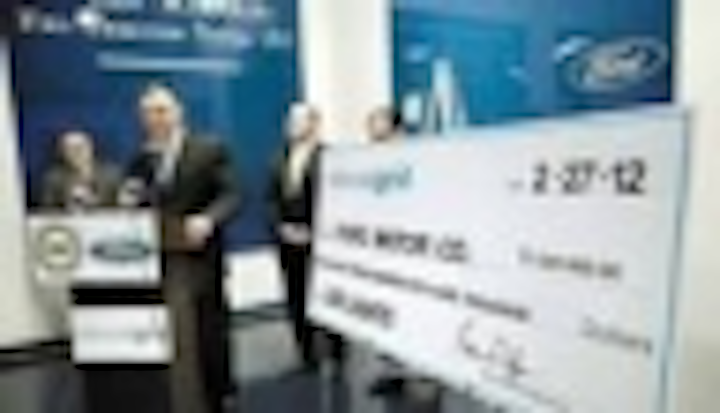 The work involved the replacement of 1740 tandem-style metal-halide fixtures with LED fixtures that are 70 percent more energy efficient and manufactured by S3J Electronics of Lancaster, NY. Ford personnel began installing the LED lamps last October and the project was completed last month. The plant stamps parts for vehicles including the Ford Edge.

The LED lamps were specifically designed for the Ford project, with special consideration taken to the high temperatures under which they have to operate inside the plant. LED lighting also provides a consistent level of high-quality light, creating a potentially safer work environment because workers can view a truer version of color and better distinguish between different colors.

The LED lighting upgrade is expected to provide the stamping plant an annual energy reduction of approximately 10.7 million kWh or the equivalent to the amount of electricity used by 1400 homes in Western New York for a year. Looked at from another perspective, the plant’s total energy use is now 10 percent lower than it was previously. “The plant load is about 10,000 kilo-watts of demand and this project reduces that by about 1000 kilowatts or about 10 percent of our plant demand. So by reducing our cost, our operating cost it makes the plant total cost more viable,” said Jeff White the Energy Efficiency Manager for Ford.

National Grid, an electricity and gas provider to the Northeastern US and the UK, awarded Ford a $1.35 million energy efficiency grant -- the largest the company has ever awarded in Upstate New York since the program was introduced in 2009. Ford paid the remaining $1.35 million for a project, which was completed on schedule and on budget.

“The LED lighting project at the Buffalo Stamping Plant was a great project in which local businesses worked together in an effort to save energy and money through the use of S3J’s high quality, energy efficient LED light fixtures which are locally manufactured,” said Adam Metz, president of S3J Electronics LLC. “This project demonstrates National Grid’s and Ford’s commitment to reduce energy consumption, to invest in the Western New York region, and to use local manufacturers such as S3J Electronics when possible.”

“So National Grid initiates these types of conversations. We come in and see our clients and we try to find out what is driving their energy usage. Then we come back to them on how to minimize that usage and optimize the equipment they have in place. From a National Grid perspective this is a win. We are out there trying to promote energy efficient use of technology,” said Ken Daly the President of National Grid.

Since its inception in 2009, energy-efficiency programs have helped more than 15,000 business customers in Upstate New York save more than 373 million kWh of electricity, which is equivalent to the amount of energy used by 50,000 homes in one year.