Energy-efficiency upgrade also provides relief from the heat of legacy lighting for the near 100 members of the iconic Royal Philharmonic Orchestra. 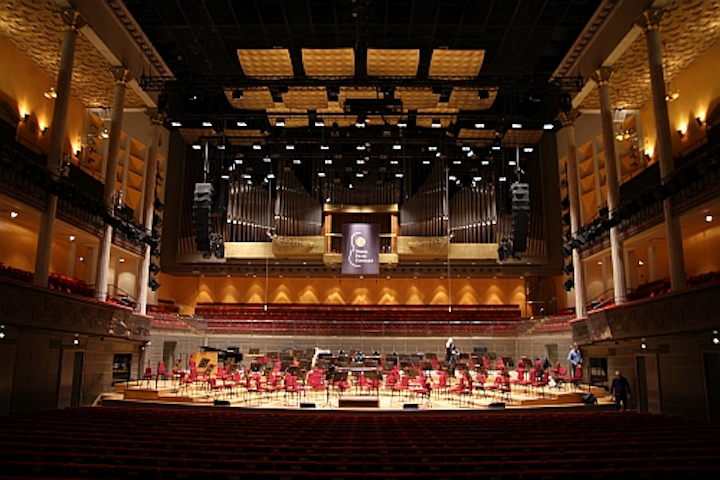 Global Design Solutions (GDS) has announced that the famed Stockholm Concert Hall (Konserthuset), home of the Nobel Prize awards, has been retrofitted with GDS ArcSystem LED-based lighting. The project includes multiple entertainment venues and audience areas in the facility; and above the main stage in the largest hall, 50 of the LED fixtures replaced 160 legacy lighting units, dropping power consumption from 68 kW to 7.5 kW.

The Stockholm Concert Hall dates to 1926, is one of the few instances of neo-classical architecture in Sweden, and is the home of the Royal Philharmonic Orchestra as well as the Nobel Prize ceremony. The facility includes three separate halls that in aggregate seat upwards of 2000 people. The venues received an acoustical retrofit in 1971, but the lighting was in need of an upgrade due to efficiency, the need for more uniform lighting and better controls, and because of the heat radiated on the performers by the legacy lighting. 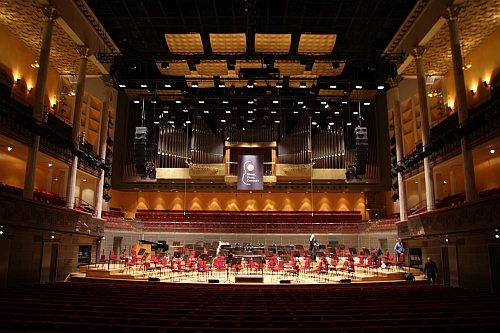 GDS and partner Anderson & Co Sweden AB were tasked with the lighting upgrade that ultimately was based on solid-state lighting (SSL). In the Main Hall, the largest and most famous in the Konserthuset, the lighting system dissipating 68 kW was especially problematic because of the heat generated and energy consumed. The partners installed only 50 of the GDS ArcSystem fixtures yet realized more even lighting along with the elimination of the heat issue. The cooler-running LEDs are proving beneficial both to the performers and to the accountants as the SSL installation also has reduced air conditioning costs significantly. The Main Hall also now has 32 of the ArcSystem luminaires installed over the audience seating area.

GDS has been involved in a number of SSL projects at major and historic entertainment venues. For example, the company worked with ICE Electrical on a retrofit at the Portsmouth Guildhall in the UK. The company also retrofitted Wembley Arena in London in partnership with Fagan Electrical.

"Sometimes amongst the figures and the specifications it is easy to overlook the fact that the purpose of the technology is to enhance the conditions in which performer and audience alike engage with the arts," said Andy Duffield, international sales manager at GDS. "In the case of the Stockholm Concert Hall, here was another example of a magnificent historic building, hobbled by an outdated system, being transformed for the benefit of every user by the installation of ArcSystem. Of course the extremely positive environmental data cannot and should not be overlooked -- it's quite dramatic -- but ultimately, at the Konserthuset, perhaps the real story is about sitting comfortably and seeing clearly."

As in the case of several other projects, GDS installed its wireless control platform called ArcMesh along with the ArcSystem fixtures. The controls allow the Konserthuset to set the light levels for dramatic effect over the stage area while also allowing lighting to be dimmed above the audience during performances and raised for audience entry and exit.