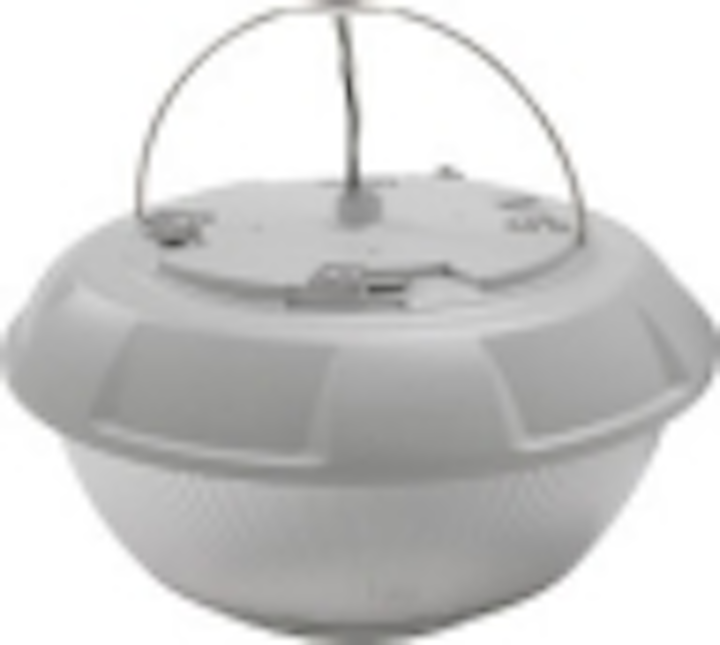 Cree has announced a new LED-based parking-garage fixture called the VG Series that diverges significantly from the more typical designs that expose the LED point sources and potentially cause glare problems. The relatively small solid-state lighting (SSL) design uses LEDs that shine upward through a collimating optic into a reflecting chamber and through a diffuser that spreads the beam in a Type V pattern.

We first noted a trend with manufacturers moving away from area-lighting designs that expose LEDs covered by total internal reflection (TIR) lenses at Lightfair. Cree first showed its CPY Series canopy fixture at the show that includes a diffuser, and Kenall has also relied on the combination of TIR lenses and a diffuser in its SSL products.

Greg Dixon, product portfolio manager at Cree, said that the design team wasn't directed at a diffuser-based approach but was tasked to design a relatively small garage luminaire that could be easily installed and that provided superior aesthetics. Dixon said that Cree had studied the garage market and determined that the bulk of the products on the market "produce too much glare and are too expensive."

Dixon said the other goal for the design was a product that could deliver quick payback. Cree said that the product reduces energy usage by 73% relative to the metal halide (MH) lights typically used in garages. That will enable payback within two years based on the national average of $0.11/kWh for electricity cost.

The design of the luminaire is generalized in the nearby cutaway diagram. The LEDs are mounted on a heat sink near the bottom of the fixture and shine upward. A one-piece collimating lens with individual TIR-like elements is mounted over the LEDs. An internal reflector directs the light outward and a prismatic refracting lens produces the desired beam pattern.

Cree tested four prototypes of the design in the garage of a potential customer earlier this spring in place of 200W MH lamps. Dixon said that customer has ordered 800 units and that Cree would fulfill the order this month.

The prototype installation confirmed the simplicity of installation. The units weigh only 12.5 lb and a single worker handled the replacement of MH fixtures, with each installation requiring only ten minutes.

Cree was still working to fully characterize the fixture when the announcement was made. The normal Type V product will deliver in the range of 3700–3800 lm with a Type V Wide version delivering a bit more. Dixon said that the DesignLights Consortium (DLC) had already qualified the product and that means efficacy will be in excess of 75 lm/W.