Royal Philips Electronics used a Climate Group event in China to announce its participation in the 1000-Village Solar LED lighting program and is donating a range of SSL systems. 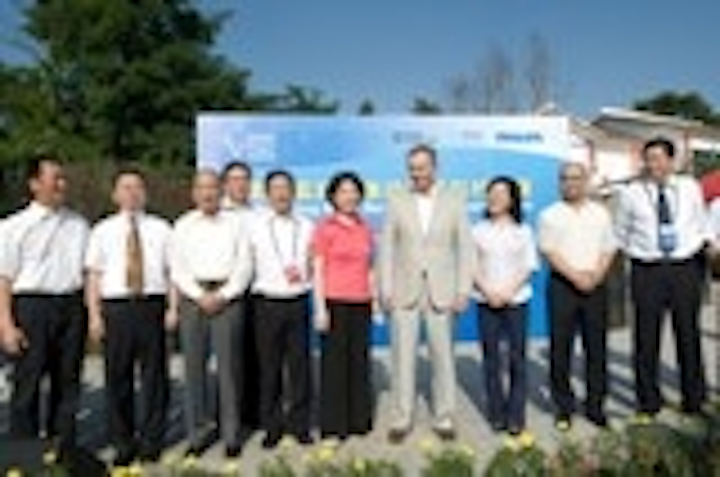 Royal Phillips Electronics is now a partner in the 1000-Village Solar LED lighting program that plans to bring solar-powered, LED-based, solid-state lighting (SSL) to 1000 rural villages in China, India, and Africa. Philips is donating various SSL technology and joined the program at a Climate Group event in the village of Xiao Xi Chong located in the region around Guiyang City, China.

Mr. Liangqi Lin, general manager of Philips Lighting Greater China stated: “We hope that solar LED lighting can be recognized and applied more widely through our involvement in this program and its efforts to demonstrate how to reduce the cost and impact of greenhouse gas emissions." Already Philips has donated solar-powered LED roadway lighting with adaptive controls that's installed in the Guiyang City region.

The five-year 1000-Village Solar LED lighting project launched in August 2009 as a joint initiative of The Climate Group and Chinese film star Jet Li's One Foundation. The recent event marked the one-year anniversary of the program and celebration of a successful first phase.

"The first phase of the 1000-Village Program, the demonstration of solar LED lighting technology, has been successfully completed," said Ms. Wu Changhua, Director of the Climate Group Greater China. "Forty administrative villages have taken part in the program, including sunlight-deficient areas such as Chongqing, Chengdu and Guiyang."

Ultimately the goal of the program is to enhance the lives of villagers through the use of clean technology projects. The Climate Group's Changhua said, "Over the last year, The Climate Group has proved how valuable solar LED lighting is for rural areas of China, as it requires no cabling. What’s more is that it helps enhance social communication and cultural activities in rural areas by improving public lighting. This is an excellent example of a clean technology that not only reduces costs and greenhouse gas emissions, but also enhances people’s way and quality of life."

Philips Lin added, "Philips is committed to promoting the green switch in all areas of the society. Thanks to the 1000-Village Project, Philips is able to enhance villagers’ life quality through excellent, energy-efficient lighting and explore further sustainable rural development as part of a greater contribution to the full realization of low-carbon society and new village construction."

The anniversary event was attended by a number of dignitaries including Lin, Changhua, Weixiang Yu the vice mayor of Guiyang, and former British Prime Minister Tony Blair – a leading associate of The Climate Group.