i-Vision has supplied a complete exterior lighting scheme for a hotel in Dublin, Ireland. 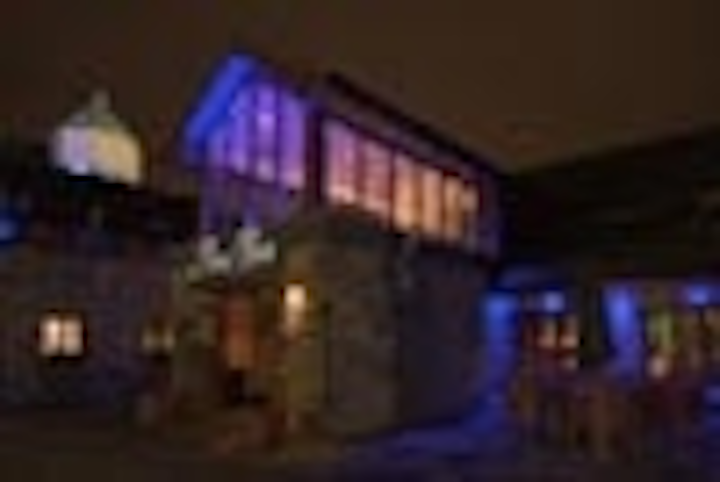 UK-based architectural and feature lighting specialist i-Vision has supplied and installed a highly atmospheric lighting scheme at the Courtyard Hotel in Leixlip, just outside Dublin.

On the banks of the River Liffey, the building was Ireland's first and original Guinness Brewery, back in 1756. Lighting was seen an essential "finishing" factor in transforming the building into a hotel.

i-Vision's Geoff Jones proposed a scheme to accentuate the natural beauty of the building and reaffirm the practical requirement that "outside" was a pleasant space.

For the main courtyard entrance, Jones specified twenty-two 1 Watt LED fittings for each "après ski" area, which are embedded in the stonework and decking, pointing upwards.

The courtyard walls are lit with i-Vision colour-changing Lumos 3 Exterior down-lighters, mounted in the soffits all around the courtyard, illuminating the stone walls below.

For the entry areas into the hotel, bars and restaurant, Jones used copper-housed up and down-lighters either side of the door, complete with Lumos 3 W LED fittings. Copper was chosen for its natural aging properties, so it blends into the stone.

The restaurant entrance door is glass fronted, and the glass on the first floor of the entrance area is uplit with a series of Lumos 600 mm strips creating interesting reflections and refractions on the glass. There are also more 1 Watt LEDs ensconced into the soffits.

The entrance into the courtyard is covered, so Jones recommended brick lights to brighten this up, complete with low energy lamps. The walls are down-washed with Lumos 100 RGB strips.

The river frontage and garden is overlooked by most of the rooms, so it was important to have this looking its best at night. It's here that the two wings - old and new - of the hotel amalgamate, so Jones particularly wanted to integrate and connect both elements via lighting . He used the same fixtures, up-lighting both wings with 150 Watt narrow beam units, complete with amber dichroic filters. The amber brings out the stonework of the old part and accentuates the elegant rendering of the new part.

The grassy area of the garden and the riverbank are lit with electric green MBI floods, separating them gently from the amber glow of the hotel.

Jones then lit two additional feature areas - the hotel's 8-sided tower, which can be clearly seen from the surrounding countryside and the Executive Suite balcony and Jacuzzi.

For the Tower he again chose Lumos 600 strips, placed at the base of the 8 sides, which are highly effective. Below the tower, for the Bridal Suite balcony, he continued the fashion of down-lighters in the soffits, offset with some blue in-grounds in the balcony decking, shining upwards.

All the architectural lighting is controlled via two ESA 512 DMX units with two Lumos Touch remote packs. These each offer 8 pre-set scenes, and link to a PC for programming. They were set according to the client's brief.

The Courtyard's general manager Gavin O'Shea is "delighted" with the results of the lighting: "It's the icing on the cake," he said. "It does everything we hoped and more, and the place would simply not be finished without it!".