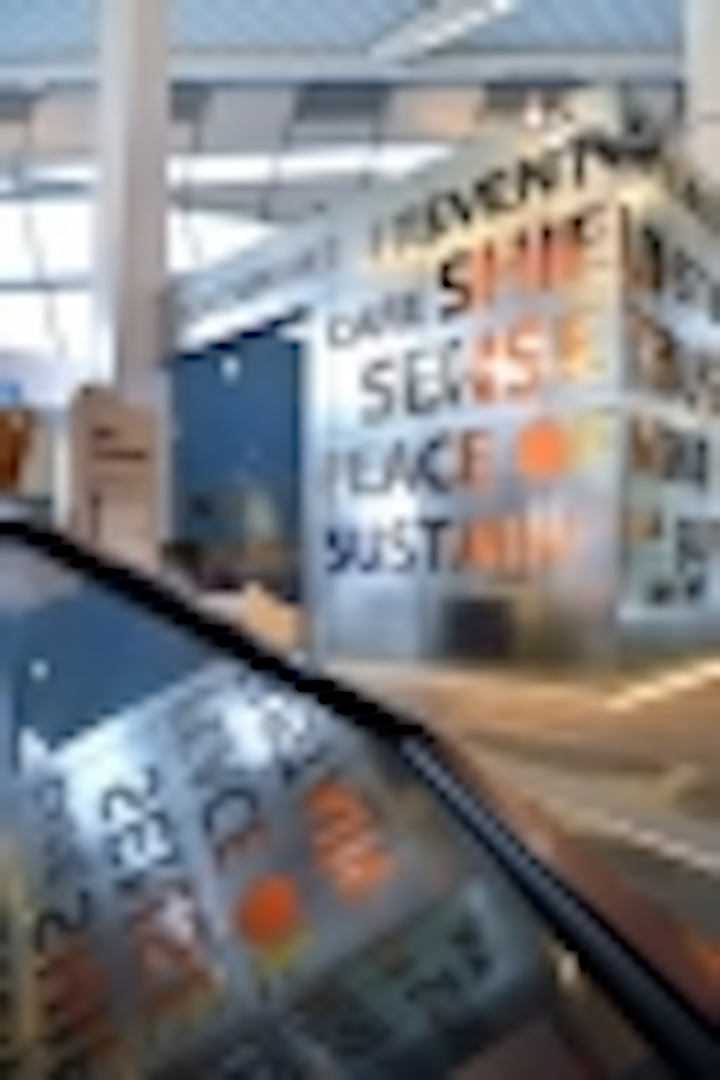 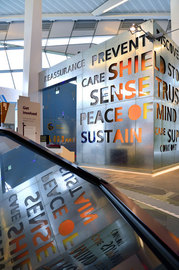 The glittering glass facets of the new Siemens Crystal building form the striking exterior of Londonâs newest landmark, at the Western end of the Royal Docks. Just down the road from the Stratford Olympic park and across the river from the O2 Centre, formerly known as the Millennium Dome, the Crystal represents a Â£30m investment and will be home to the companyâs global Centre of Competence Cities. The aim is to encourage the growth of sustainable cities through partnerships, research and expert collaboration.

The structure covers 6,300 square meters and is designed by Wilkinson Eyre Architects with Arup to be one of the most sustainable buildings in the world, using solar power and ground source heat pumps to generate its own energy among a large number of sustainable technologies. With offices and a 270-seat auditorium, the highly interactive building offers the public exhibits such as âSmart Buildingsâ, âWater is Lifeâ and âKeep movingâ.

Light Emissions, with a most apt name, were chosen by designers Event Communications to provide one of the âhottestâ exhibits, a huge interactive fire, with LED video screen technology, for the âSafe and Soundâ area. âThe technology had to be cool and sustainable, especially for this project.â comments Dan Savage, lead designer of the project at Event Communications.

The increased demand for visually compelling environments â in top end venues and attractions such as museums, corporate showrooms and lobbies, retail and interior design, calls for a focus on sustainable solutions, especially when used on very large scales. âArchitectural Videoâ, the new low resolution LED video technology, meets that square on, where the video displays can be embedded into the building or interior design surfaces, making it a perfect solution for cities and environments of the future.

âThe tricky bit was that the display had to be very large and mounted on a curved surface.â Continues Savage. âAny other technology such as lighting or projection was ruled out due to impossible angles as well as the absolute no-no in using anything emitting heat. Additionally, it had to be a video display system to enable the interactive control.â

âBeing a permanent exhibit, operating every opening hour, every day of the week, the display has to be extremely robust and simpleâ, adds Light Emissions Peter Ed. âOur Art LED video system fitted into this project perfectlyâ. Specifically designed to be embedded into permanent structures, the Art system is a 100% video system not needing any complex pixel mapping.

Used as an eye-catcher on both levels of the large exhibition space, the screen is mounted on a curved plane, partially hidden behind two large metal walls joining into a corner with large letters cut out with words and phrases such as âCareâ. âTrustâ and âPeace of Mindâ.
Most of the ArtBoard video tiles were narrow, designed to be mounted on curves. The pixel pitch selected was 37mm, with a thin dark Acrylic diffuser curved in front of the ArtBoards giving a silky smooth image as the flames lap up and down the screen. Two columns of full size ArtBoards are lined on each side of the curve at a slight angle, using the reflection of the LEDs inside the diffuser to reflect backwards to enable the visitors who are actually controlling the interactive consoles to see the results of their endeavours.
Visitors are invited to play with three interactive consoles, providing more or less of the three vital ingredients of fire â fuel, oxygen and heat. As the mixture is varied, the flames subside or tower up the 4m high exhibit with the interactive flames designed by Daniel Hirschmann.

âWhat is really important with any permanent installation is not only how robust and how reliable it is, but also that nobody on site should ever have to be called routinely to deal with technical issues. Art is completely âPC freeâ â if power is lost and then returned, it will start up all by itself in seconds with no human intervention.â, concludes Peter Ed.