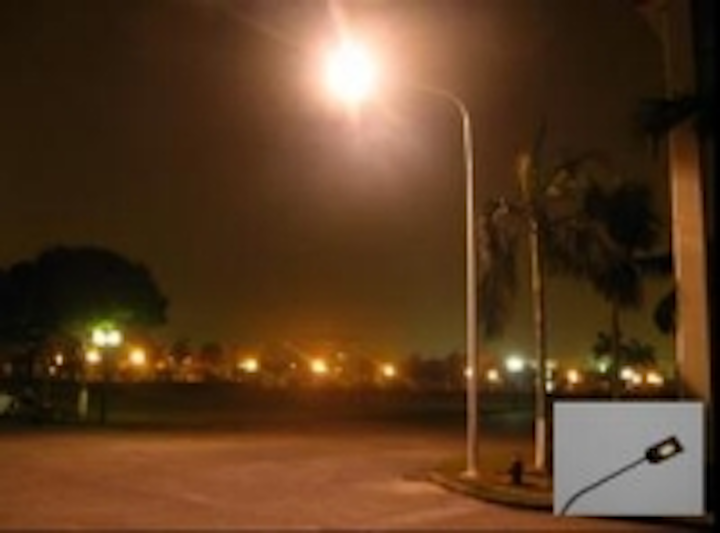 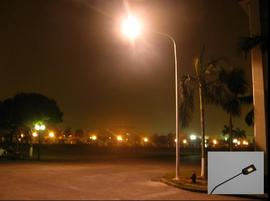 This 102-watts Street Light with correlated color temperature (CCT) at 3200K can keep LEDs junction temperature (Tj) constantly at under 55 °C as well.

As a leader opening the door to LEDs general lighting, NeoPac, who had unveiled a world leading 120-watts white color LEDs outdoor lighting device at 6,000 lumens output in early 2007, recently launched a 102-watts warm white model, based on the same fixture of the 120-watt predecessor, for the applications of street lighting and outdoor area lighting.

Coupled on this 102-watt warm white Street Light in alternate arrangement are six 10-watt white color and six 7-watts amber color NeoPac Emitters together. They provide a mixing warm white spectrum with initial total luminance flux of 4,680 lumens of which 3,000 lm are in white and 1,680 lumens are in amber. Since the LEDs junction temperature are kept at under 55°C, the maintain luminance flux can be kept at up to 4,200 lumens. By using twelve secondary asymmetric optical lenses, the lamp can offer a beautiful butterfly shaped light pattern and as a Street Light the light distribution on the road will be fitting actual application needs.

Each ultra-high-power, ultra-low thermal resistance, single-packaged NeoPac Emitter is coupled with a proprietary micro heat pipe as an integrated NeoPac Light Engine and every NeoPac Light Engine is coupled with a single integrated aluminum heat sink to form a system-in-package, ultra-high-power LEDs lighting module. The LEDs Street Light comes with tested IP rating of 65 for dust and water protection. They are built tough with durable metal casing and sealed optic housing to sustain the severest weather condition for any outdoor application.

The thermal resistance (Rjc) of NeoPac Emitter is at 0.5℃/W ~0.75℃/W, depending on different chips configuration. The total system thermal resistance (Rja) of the lamp from LEDs junction to surrounding air is elaborately controlled at under 0.3℃/W and the heat generated by LEDs chips was pumping away individually from LEDs junction through the micro heat pipe and aluminum heat sink to be efficiently dissipated into the surrounding air. The LEDs junction temperature of the twelve NeoPac Emitters is uniformly suppressed at under 55°C.

Amber LED is very temperature sensitive. The illumination efficiency, spectrum characteristics, and useful life (L70) of amber LED are susceptible to the variation of junction temperature (Tj). It is essentially a challenge in nature to assemble high power white and amber LEDs packages together, since their decay rates are significantly different from each other. When the junction temperature is high, amber light has a rapider decay rate than that of white light, both in maintain lumen and useful life. To overcome this predicament to design a practical ultra-high-power LEDs lighting device for commercial use, NeoPac’s solution is to keep the Tj of all white and amber ultra-high-power LEDs packages at a very low level, says 55°C.

"This is essentially a technological bottleneck in thermal management for making a high power LEDs fixture. NeoPac, however, has thwarted this challenge by utilizing its patented system-in-package (SIP) technology and successfully presents the world with this pioneering hundred watts warm white LED outdoor lighting device. As we know that most of conventional Street Lights installed on roads are warm white color since safety is always an issue when people driving a car in foggy environment and the warm white lights can provide a better lighting in such areas," says Jeffrey Chen.

"The air particle penetration capability of amber light is better than that of natural white. The mixing warm white LEDs lamps can be used in a wider range of outdoor applications than the pure white ones. By launching this world first warm white outdoor LEDs lamps at power over 100 watts at this moment, we are proud of opening the door for LEDs in street lighting application," says Jeffrey Chen.

Furthermore, the high brightness LEDs lamp can be also used for different outdoor applications. By changing different secondary optics, different light pattern can be achieved. 26° beam angle for floodlight and wall washing, 80° beam angle for area lighting applications, and the others are all available to satisfy market’s various needs.

“According to NeoPac’s products roadmap, the luminous efficacy of NeoPac Emitter now is 50lm/W in white and 40lm/W in amber and the efficacy will be improved up to 75lm/W and 45lm/W respectively in early 2008. An energy saving NeoBulb Street Light with lumen output over 10,000lm in white and 8,000 lm in warm white will be launched into market in early 2008 accordingly” according to Jeffrey Chen

The full series of NeoBulb lighting devices will be demonstrated at the Light Middle-East at Dubai during May 13~15.