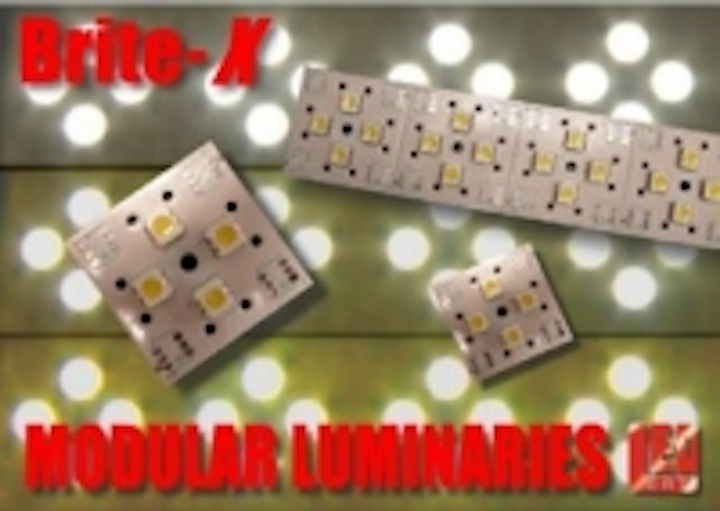 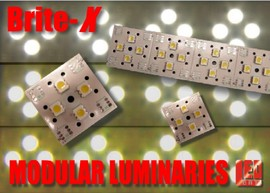 The Brite-X system is entirely modularized, allowing system designers total freedom to choose the appropriate number of LEDs per module or the total aggregate number of modules and their geometric layout to achieve desired luminaire output.

Brite-X modules allow for light quality and output to be easily adjusted. The modules can be specified to include one to eight LEDs depending upon required intensity. To allow for further customization per application, a wide range of color temperature (CCT) values is also available.

The Brite-4 module boasts an impressive output of 60 lumens, while the Brite-6 and the Brite-8 emit 90 lumens and 120 lumens, respectively. Each module can be ordered in lighting industry standard color temperatures for white, or in a wide range of colors for architectural, thematic and decorative applications.

Another innovation introduced with the Brite-X product line is the ability of designers to specify either cluster or linear layout within the module. This standard feature allows for grid arrays of various lengths and widths to suite particular applications to be selected by designers without the need for complicated circuit layout.

“We believe that this is an easy template for lighting designers to work with,” George Lee, the president of American Bright, has commented. “We need to move away from the largely unsuccessful template of LED manufacturers asking lighting designers to learn circuit layout, driver design, and thermal management! We are in effect creating a basic building block of sorts that is user-friendly to lighting designers,” he added.

A design guide that is comprised of the Brite-X specifications and related documentation is available from American Bright directly.