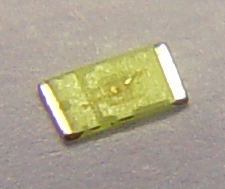 SEOUL, KOREA -– Seoul Semiconductor, one of the world’s leading LED manufacturers, announced today that it has launched the world’s thinnest chip-LED at 0.17mm, capable of producing more than two times the brightness of existing chip-LEDs.

Seoul Semiconductor has applied for a patent for its new chip.
Seoul Semiconductor’s new chip-LED, WH108, measures 1.6mm in width, 0.8mm in length and 0.17mm in height, and represents a significant reduction in thickness. The WH108 is 15% thinner than the industry’s existing thin chip-LED, which measures 0.2mm.

The WH108 also delivers superior performance at a luminous intensity of 240 mcd, more than two times brighter than the existing chip-LED at a current of 5 mA.

WH108’s ultra-thin package and high brightness make it ideal for use in applications for cell phone keypad modules or touch pads, which will ultimately lead to thinner cell phones. In addition, the WH108 is capable of producing the same brightness at a lower power, which helps extend the battery life of portable devices such as cell phones, digital cameras and laptops.

Its wafer-type substrate, which has been structurally precision-processed to improve the optical efficiency, enables the chip to realize excellent luminous intensity and thermal characteristics.
Prototype models of the WH108 in white, blue and green will be available to cell phone companies in Korea and globally in December 2007. Seoul Semiconductor will begin mass-production of the WH108 on a scale of more than 10 million LEDs per month in the first quarter of 2008.

“The WH108 is a result of our continuous commitment to meet our customers’ demand for thinner and brighter chip-LEDs,” said Jung Soo Park, the head of chip LED business division at Seoul Semiconductor. “Seoul Semiconductor will not cease in its research and development efforts and commitment to advance the world’s LED technology,” he added.

About Seoul Semiconductor
Seoul Semiconductor, the world’s leading LED manufacturer, has been named to Forbes and Business Weeks lists as one of the most promising Asian companies. Its product, Acriche, was recently named as "Product of the Year 2006" by Elektronik, one of the most prestigious electronics magazines in Europe. Seoul Semiconductor’s primary business areas are LED packaging and custom module manufacturing. It provides a full range of LED products including AC-driven semiconductor light source, Acriche, High-brightness Power, Side View, Top, Chip, Lamp and High Flux LEDs, and custom type modules. Applications for the company’s LED products include general lighting, signage, back lighting for mobile phones, TVs, notebook computers, automotive lighting, home appliances, signals, etc. Seoul Semiconductor reported US$200 million in sales in 2006. It has 1,251 patents and 100 licenses as of June 30, 2007. Seoul Semiconductor has 18 branches including 3 overseas corporate offices. Its products are also represented worldwide by more than 90 distributors.