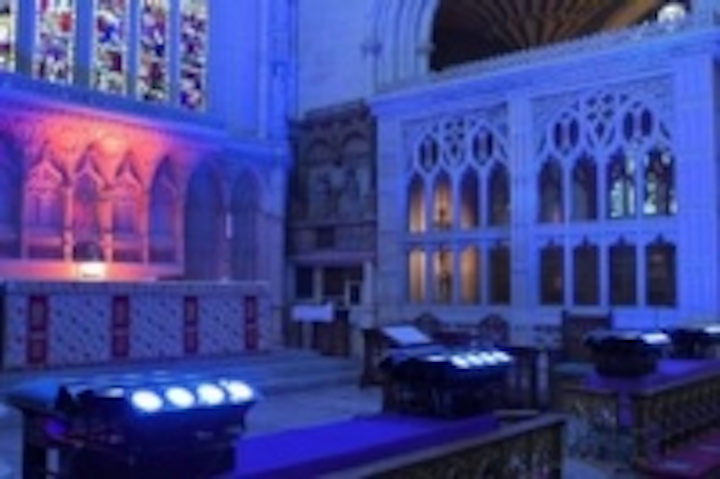 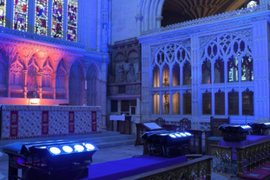 The large scale performance united Pena with the 25 strong Bath Camerata Singers, his own five flamenco singers, three guitarists, a percussionist and a flamenco dancer. The show followed on from the success of last year's Brian Eno collaboration with Bath Camerata at the Abbey.

Bath Festival’s lighting designer James Loudon wanted some dramatic intense visuals to match the spirituality of the performance, but rather than “Whiz-bang effects, it needed sympathetic illumination on both the performers and the building” he explains. He also wanted to do something completely different to highlight the building’s amazing architecture.

The Abbey is a very special place to work requiring very specific equipment to do it justice and highlight it’s subtle honey coloured Bath stone which takes light very well. It features a fantastic set of windows, pillars and vaulting, plus many other perfectly preserved ecclesiastical elements.

With 26 metres of height up to the nave vaulting, they needed a colour changing wash unit with some serious power. Loudon, who has used other i-Pix products with great enthusiasm, thought the new BB’s would be just the ticket!

“I have known the i-Pix team from the start and so was confident that the product would be of excellent quality and not another “me too” device” recalls Loudon. Notwithstanding that, he says that neither he nor his crew were prepared for what turned up at local lighting hire company Enlightened the evening before the event.

They spent that evening lighting up Riverside Business Park with a couple of BBs, and then they rigged 7 into the Abbey the next day.

Four were up at the far end, lighting the vaulting and the Great East window. Loudon was able to lie the BB’s on their backs and fan the four battens out to get really good coverage.

A pair were positioned at the West End of the building, and the final one on the reredos – the screen behind the High Altar. Even in broad daylight their effect was clearly visible and as the show progressed and night fell, the building started glowing in a fabulous quality of light – which was also most appropriate to the atmospheric surroundings. “I was particularly impressed to get some subtle pinks and amber tones out of the BB’s as well as the full-on lavenders and blues at which they simply excel” states Loudon, adding “And they are SO bright!!”

At one point the production manager looked at the pair focussed on the statues in the West End, commented how good they looked, and asked if they were at ‘full’. A quick glance at his Avo Pearl console monitor confirmed to Loudon that they were running at a mere 7%! “I hardly ever had them on full for fear of stealing the show” he admits!

The new units attracted great interest generally, with all the lighting, sound and stage crew having a good look – amidst almost universal disbelief that this was really an LED fixture!

“I think the BB will be a real winner and I’m looking forward to using them again” says Loudon, who is also designing lighting for Glastonbury’s famous Circus tent.

All lighting kit (which included 14 ETC Parnels and four 650W fresnels on low floor stands to cover the downstage dancing) was supplied by Enlightened Lighting and crewed by Simon Marcus and Chris Drake.

Two units were also used by Enlightened two nights later in Bath Pavilion for a show by salsa band Sierra Maestra – this was another of the Festival’s temporary venues – all of which have lighting supplied by Enlightened. They were used for front side lighting, with Enlightened’s Simon Marcus commenting, “They are also really ideal for low power situations where you need to get a load of light.”