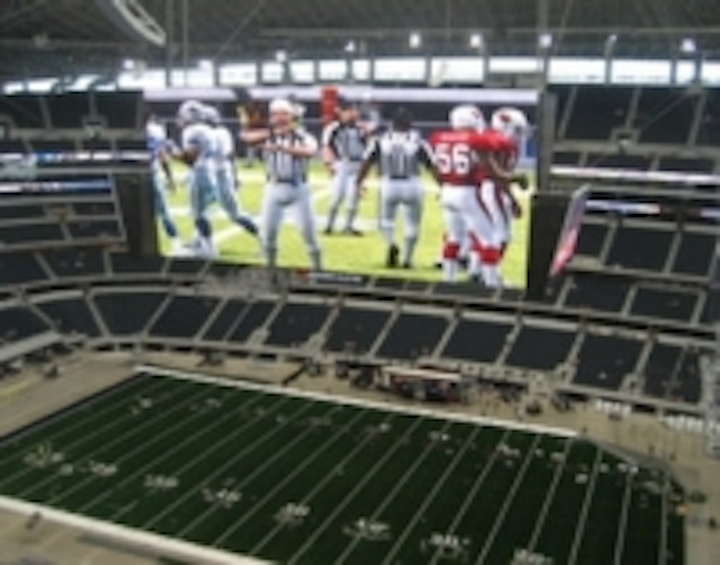 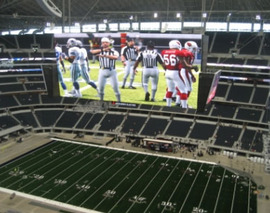 There has been a lot of TV coverage recently concerning the Dallas Cowboys giant video displays at their new stadium in Arlington. The $40m, four-sided, high-definition Diamond Vision video board, which is built by Mitsubishi Electric, uses 22,000 TDK-Lambda ZWS power supplies to light the 25 million Light Emitting Diodes (LEDs) needed to create the image on the screen.

As part of the team’s move from their previous home in Irving, the recently opened $1.1bn stadium sports a retractable roof from which the world’s largest HDTV screens hang. The four panels, which together weigh 600 metric tons (600,000kg), are suspended approximately 30 metres above midfield. The sideline panel stretches from one 20-yard line to the other and measures 21.76 x 48.32m; it has just been recognised by the Guinness Book of Records as the world’s largest High Definition (HD) video screen.

Already Cowboys fans have watched players like Marion Barber, Felix Jones and Tony Romo in a way that no fan has ever seen. “For high profile installations such as these, the display manufacturer wanted a reliable, quality product to power its LEDs,” says David Norton, vice president of marketing at TDK-Lambda Americas. “That‘s why they chose ZWS power supplies from TDK-Lambda.”

Another record breaker, this time recognised as the world’s highest resolution LED display, is located in the New York Yankee Stadium. Here 8,590 ZWS power supplies are used to power the eight and a half million LEDs used to render the image onto the screen. “Like the Dallas Cowboys displays,” says Norton, “TDK-Lambda power supplies were selected for their long-term reliability and quality.”