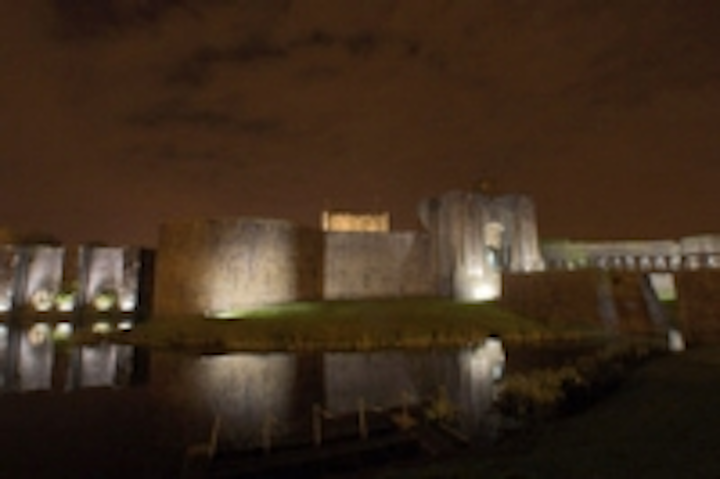 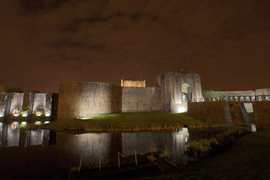 Cadw, a division of the Welsh Assembly Government, holds responsibility for preserving and promoting the history and heritage of Wales.

LTP was brought onboard at the tender stage of the project by Philips' key account manager Richard Williams. The 8 sites in which LTP are involved are Tintern Abbey, Chepstow Castle, Caerphilly Castle, Castell Coch, Coity Castle, Llansteffan Castle, Kidwelly Castle and Swansea Castle.

In addition to making significant savings to the amount of electricity needed to run the schemes, the new scheme dramatically reduces the long term maintenance needed and radically enhances the quality of light with a cleaner and more flattering source. Reeves comments. "It has been an amazing project - specially as we are based in South Wales. There's been great teamwork and synergy between us and Philips, and it's offered the chance to add value and aesthetic input to some of the most beautiful sites in the country".

The products utilised are primarily the Philips eW Reach Powercore - the white light version of Philips SSL's flagship exterior architectural floodlight. These are currently the only LED fixtures incorporating Powercore technology, that are powerful enough to illuminate large architectural façades with white light washes in colour temperatures ranging from a warm 2700 K to a 4000 K 'neutral white'.

Powercore technology is optimized to drive LED lighting systems. It integrates power and data management directly within the LED fixtures, eliminating the need for external low-voltage power supplies and special cabling that was historically required for LED lighting systems. Reducing the cost and complexity of the installation process, it also makes LEDs far easier to use in existing lighting environments such as this.

The site work was co-ordinated by LTP's Jonathan Adkins, working with 2 experienced installation engineers. With the first 4 locations complete, the challenges included having boat-only access to rig the fixtures skimming up the exterior walls of Caerphilly Castle via the substantial moat.

Caerphilly Castle
Caerphilly Castle is one of the great medieval castles of western Europe. It's size of 1.2 hectares makes it the largest in Britain after Windsor, it features complex water defences and is the first truly concentric castle in Britain. At the time of building in the late 13th century, it was a revolutionary masterpiece of military planning.

The interior Castle keep walls of the castle are now illuminated with 15 warm eW (essential white) Reaches. In contrast the exterior walls are lit with 12 neutral white eW Reaches, which add depth and dimension to the visual picture at night by differentiating between the two areas.

For infill lighting, 6 warm white eW Blast Powercores are dotted around, ensuring that the many intricacies of the Castle's superstructure are visible, adding a touch of magic to an already majestic scene.

A new addition to these elements of the scheme, 15 neutral white eW Graze Powercore fittings have been added, skimming up 3 sides of the Castle's front walls, just inside the moat. These were suggested by Terry Reeves to incorporate the external fascias of the castle into the overall design."It made complete sense" he says, "Rather than having this great expanse sitting there in darkness". Once again, this adds a sharp definition to the after-dark experience, giving on-lookers a real sense of the vast scale of the Castle.

The eW Graze is a linear fixture optimised for this specific application, combining a low profile design with excellent beam quality.

All the fixtures are fitted into housed in special self contained hides, custom built to LTP's spec to guard against the weather and potential vandalism.

For control - at all sites - the new units are hooked into the existing lighting control systems, and turned on/off either by time clock or photo cell.

Tintern Abbey
The fascinating and atmospheric ruins of Tintern Abbey are situated on the Welsh bank of the River Wye in Monmouthshire. It was founded by Walter de Clare, Lord of Chepstow in 1131, and at the time was the second Cistercian foundation in Britain and the first in Wales. It is now one of the most spectacular ruins in the country and has been the source of inspiration to numerous artists, poets, writers and musicians over the centuries.

Here LTP fitted 8 warm eW Reaches around the outside facades, which pick out the red stone in a striking soft ambient glow.

The interior is a complex juxtaposition of structural elements, with all those in the main space including the internal walls illuminated by 8 carefully positioned neutral eW Blasts, sunken into the ground. The subtle differentiation in colour temperature between the inner and outer shells of the building enhances the magical aura that descends over Tintern Abbey at night.

Castell Coch
Castell Coch ('red castle' in English) is a 19th-century Gothic Revival Castle built on the remains of a genuine 13th-century fortification. It is impressively situated on the side of a hill near the village of Tongwynlais just north of the Welsh capital of Cardiff.
The lighting requirements here were very simple, but precise, and achieved with the installation of 5 eW Reaches with wide angle lenses set to warm white, mounted on pivoting lamp-posts - which move up and down for access. The lenses were needed because of the close proximity of the fixtures to the steep walls.

It was important in the new scheme to accentuate the red brick of the walls with a complimentary colour temperature, and the building can be seen clearly from the M4 and other locations across the valley.
The LTP team completed the bulk installation work here in one day on site, with a further evening for fine tuning and focusing.

Chepstow Castle
Chepstow is a Norman castle perched high above the banks of the river Wye in the town of Chepstow, southeast Wales. Construction began in 1067, shortly after William the Conqueror was crowned King of England, and it became the key launching point for expeditions into Wales.

One of its most prominent features is the hillside running down along one side, and this view of the building is highlighted tastefully by the new lighting which is 8 eW Reaches mounted in cages around the front of the wall, plus another 2 washing the side wall elevation and allowing the Castle to be seen from the river.

This was a straight swap out between old and new lighting fixtures, and once again, warm white was chosen to compliment the yellow tone of the stone.

Also ....
This is Richard Williams' first project using LTP, although the company has completed many other works in conjunction with Philips in the context of being one of their value-added re-sellers. He comments that LTP has been "Superb" .... as well as bringing extensive local knowledge, history and other invaluable bonuses to the table.