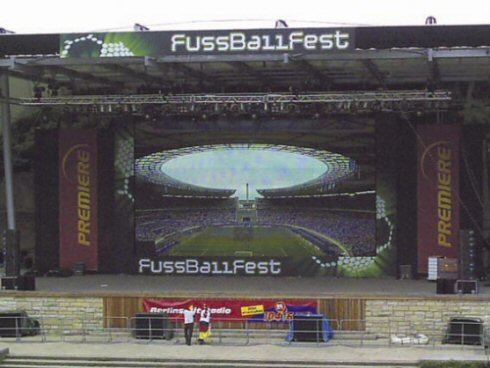 With football fever gripping the world as Germany hosted the month-long World Cup finals, there were never going to be enough seats in the stadiums to satisfy demand from the thousands fans of the 32 teams from across the globe. But German rental company Screen Visions from Stuttgart provided the second best thing for fans in Berlin - the biggest screen in the city, located just 800 metres from the German capital’s Olympic Stadium.

Measuring a colossal 90m2, the 12x9 panel Lighthouse R16 LED screen was located at the Waldbühne, an open-air concert venue built in 1934 as part of the city’s original Olympic complex. Ever since the Waldbühne has become one of Berlin’s prime focal points for live music, theatre and film.

‘Theatre’ of a different kind was the order of the day as the giant Lighthouse screen broadcast matches throughout the World Cup, from the group stages (including the opening Germany v Costa Rice match on 9th June) right through to the Italy v France World Cup Final exactly a month later.

The screen took its feed from satellite television, via a Lighthouse LIP-KX processor, to relay the televised footage to the assembled fans. Because of its close proximity to the stadium, it acted as a useful overspill area for those who were unable to get tickets for the matches themselves, but who wanted to get as close to experiencing the game itself as possible.

Before each match, in order to give football fans a complete entertainment package, the Waldbühne put on live music appropriate to the teams playing in the forthcoming match. On 13th June, this featured Ivete Sangalo - the ‘Brazilian Madonna’ - who wowed a huge audience before the Brazil v Croatia game.

But, as well as the World Cup, this Lighthouse screen also had two major concerts to deal with: on the day before the first World Cup semi-final, Depeche Mode played a gig at the Waldbühne as part of their ongoing ‘Touring The Angel’ world jaunt. For this, the crew dismantled the giant screen and re-erected it as two 6x6 panel IMAG screens, one on each side of the stage which relayed live camera footage to the band’s fans. The screen was then re-erected in its 12x9 panel form for the following day’s Germany v Italy semi-final.

“It was a straightforward job,” says crew technician Paul Barry. “We could switch off the giant screen and have it moved, reassembled and up and running as two screens in just over seven hours.”

The process was repeated on 7th July, as a 23,000 sell-out crowd witnessed a huge classical concert featuring Placido Domingo less than 24 hours before the two screens had to again be reassembled as one for the third/fourth place World Cup playoff between Germany and Portugal.

With the concert being screened throughout Germany by national broadcaster ZDF, there was absolutely no margin for error. But there was no cause for worry, the reliability of the Lighthouse screen ensuring that everything went extremely smoothly.

“This has been a long haul,” adds Paul. “We’ve been on site for six weeks, the weather has been extremely hot and occasionally very wet, but the screen has acquitted itself very well.”

Roger Rinke, general manager of Screen Visions, concludes: “The Lighthouse screen was our first choice. We tested several other screens before the World Cup for reliability and consistent performance and for this combination of size of screen and numerous overnight changeovers, this product was the right decision.”

About Lighthouse Technologies
Lighthouse Technologies Limited is a leading LED technology developer, manufacturer and global supplier of state-of-the-art LED modular video panels, which can be assembled into large scale video screens for indoor and outdoor use. Specializing in the research and manufacture of LED video screens, Lighthouse has its own intellectual properties with more than 10 active patents worldwide and is committed to remain as the premier creator of intellectual property value.

The company’s LED components, panels and complete video systems undergo stringent quality control with power-on, burn-in processes at ISO 14001 and ISO 9001-certified manufacturing plants. Its products have won several international awards, among them, the IBC Exhibition Design Award 2005, the Best-In-Show Award at InfoComm 2005, the Best New Product Award at the National Association of Broadcasters 2002 (NAB) show and the Good Buzz award at InfoComm 2004, the Technological Achievement Certificate of Merit in the 2003 Hong Kong Awards for Industry as well as the prestigious Consumer Product Design Award and the HKITCC Certificate of Merit in Technological Achievement in the 1999 Hong Kong Awards for Industry. Lighthouse was also recognized as one of the Fastest Growing Technology Companies in the 2002 Deloitte Technology Fast 250.