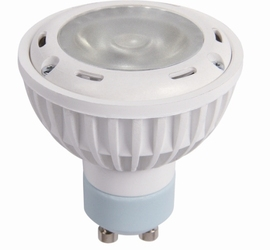 ○ Elgo, one of Europe’s leading lighting companies, shows good sales activity of bulbs using Acriche. In addition, Acriche is used in solid state lighting products manufactured by Molex, a global leading electronics manufacturer. Products from Molex will be available in the third quarter of this year.

○ Seoul Semiconductor is expected to make serious inroads into the GU10 market which consists of about 300 million bulbs per year and is worth approximately 1.2 billion dollars.

GU10-based lighting products which use Seoul Semiconductor’s ‘Acriche’ are establishing an excellent reputation in the European market through Elgo Lighting Industries S.A., one of the leading lighting manufacturers in Europe.

Seoul Semiconductor (CEO Chung Hoon Lee, www.acriche.com), a world’s leading LED manufacturer has announced that it has supplied Acriche for GU10-based lamps through Poland’s Elgo. Growth is expected to double in 2010 and the product has shown impressive sales in the European market, exceeding expectations since being launched last April.

GU10 lamp bases are one of the most widely used for interior lighting in Europe and is compatible with commercial voltages ranging from 110V to 220V. Currently, the market for GU10 is over 300 million bulbs per year and is worth approximately 1.2 billion dollars globally. GU10 is the predominant lamp-type where halogen bulbs are used for interior lighting sources. Recently, GU10-base lamp products using LED’s, which take advantage of long life and efficiency are in the limelight.

Seoul Semiconductor’s Acriche can be used in commercial AC (Alternating Current) voltage applications without an AC-DC converter, and is attracting attention as the most promising LED lighting source for GU10 bases. Acriche GU10 bulbs may be used up to thirty to forty thousand hours, which is the LED’s own average life. In the case of common LED’s it is necessary to use an AC-DC converter as they are driven only by direct current. In some cases using the AC-DC converter may lead to a reduced life for the bulb if the converter has a shorter average life than the LED. Considering the long life of the Acriche GU10 as compared to a typical Halogen GU10, with an average life of only 2,000 hours, the Acriche GU10 lifetime meets or surpasses 15 to 20 Halogen GU10 bulbs. The product also uses much less power saving 75 percent of electricity compared to Halogen GU10. Even though the LED bulb will have a higher initial cost up to 70% savings can be realized over the lifetime of the product.

An official of Seoul Semiconductor said, “As lighting solutions using Acriche begin to be sold in Europe we are moving into full-scale commercialization of the AC-driven product. Acriche is expected to be used for lighting products manufactured by global leading lighting companies within the third quarter of this year and we expect Seoul Semiconductor’s share to increase even more in the European market.”

In addition, an official of Elgo said, “Acriche has already gained substantial popularity in the European lighting market, and we use Acriche in GU10 base so that we highlight the characteristics of this product to our clients, and it is expected to lead to a continuous increase in sales.”

Additionally Acriche is being recognized for its innovation, winning a variety of awards both at home and abroad. In 2008 the product received the Korea Technology Grand Prize presented by the Ministry of Knowledge Economy and was selected as one of ‘Korea’s Top 10 New Technologies.’ In 2006 and again in 2007 Acriche was awarded ‘Best Product Award 2007’ by Elektronik and E&E, two of Europe’s best electronics magazines. Acriche was also selected as one of the 'Hot 100 Products of 2007' by EDN, an American specialist magazine for electronic component products. Last April, CEO Chung Hoon Lee of Seoul Semiconductor received the Silver Tower Order of Industrial Service Merit on the 44th Day of Invention, as recognition of his contributions to the invention of Acriche.

About Seoul Semiconductor (www.acriche.com)
Seoul Semiconductor is a world-leading LED manufacturer. The growth potential of the company is widely recognized as it was selected as ‘one of the most promising companies in Asia’ by Forbes and Business Week in 2006 and 2007, respectively. Its main offering, the Acriche™ LED, was also named "Product of the Year" by ‘Electronik’ in 2006, one of the most prestigious electronics publications in Europe, and awarded in Newtech Korea 2008 and named as Korea Ten Best New Technologies of 2008. Seoul Semiconductor’s Intelligential Property position is extremely strong with over 5,000 patents filed or registered and many cross-license agreements with industry leaders. Seoul also has 25 overseas operations, including 3 subsidiaries, and 114 worldwide distributor sites.