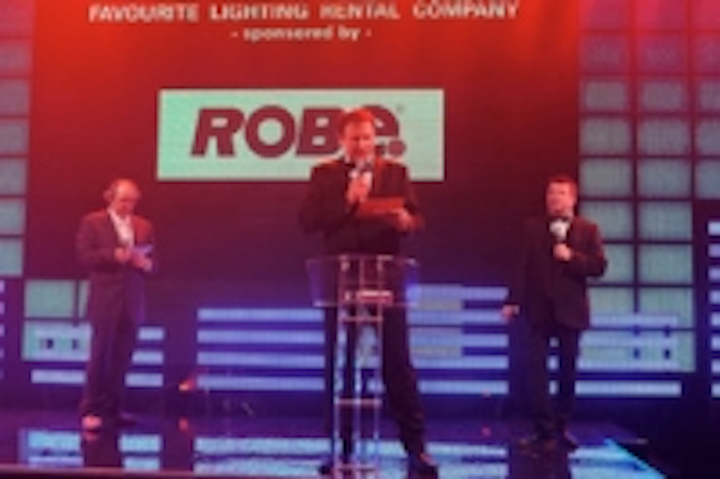 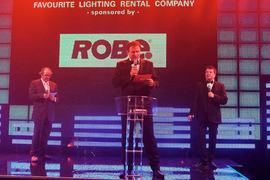 The event was staged at the Novotel London West in Hammersmith, and it was arguably the first major Awards event ever to be lit entirely with LED lightsources - and also exclusively with Robe lighting products.

This was the result of a collaboration between the Czech Republic based manufacturer and it’s UK operation, Mondiale Publishing, producers of the Awards, and leading UK lighting and visuals rental company HSL, who handled the rigging and installation of the lighting equipment.

The high profile annual TPi Awards honours the best of creative and technical talent, achievements and expertise in professional production and entertainment. The Who’s-Who of the industry was there to be impressed by Robe’s latest eco-friendly technology in action.
The lighting rig featured - for the first time on any major show – Robe’s revolutionary new ROBIN DLX Spot.

This is the world’s first RGBW spot lighting fixture with the ability to produce a complete range of proper high quality variable whites. Fifty-two of these were dotted around the complex trussing system above the stages and audience.

The 52 DLX Spots were joined by 102 ROBIN 300 LEDWashes, 32 ROBIN 600 LEDWashes – Robe’s fastest ever selling product – and 19 ROBIN 1200 LEDWashes. The ROBIN series has been designed to be smaller, brighter, lighter, genuinely power saving and more environmentally friendly.

The entire lighting rig consumed only 116 Amps of 3-phase power, despite there being almost 300 fixtures on the show, and all lighting, rigging, trussing, distro and cabling fitted into just one and a half trucks! Nice and eco-friendly.

Says Robe UK’s MD Mick Hannaford, “It was a huge honour for us to get this opportunity, and a real responsibility for both us and for Andy to ensure that it all looked amazing and impressive in front of the whole industry – you could not get a more critical audience!!! The results were spectacular! HSL did a brilliant job as always, and for Mondiale it was one of the best TPi Awards shows to date”.

Hurst’s design brought a stylish fusion of industrial chic and televisual magic to the look of the event, which was hosted by BBC 6 Music’s Stuart Maconie and BBC 5 Live’s Danny Baker and attended by over 1000 guests who enjoyed the gala dinner and saw the presentation of 28 Awards.

Hurst worked with programmer Tim Fawkes who also operated lighting on the night using a Road hog Full Boar console. The project was managed for HSL by Thor-Andre “Spantax” Saether .

Spantax comments, “HSL is very proud to have been a supplier for the TPI Awards, and this created a real buzz internally in the company with everyone getting very excited about this show. We had an amazing site crew working under the direction of crew chief Andy Pole, and acknowledging the level of interest and ownership that our crew takes in all shows on which they work, I knew we would be in for a good one.

“Robe provided Andy Hurst with an impressive line-up of fixtures - all the latest technology and all performing flawlessly. With fixtures like this, Robe has truly brought a new “tool” to every lighting designer’s imagination. HSL has invested heavily in this technology and we are already seeing savings using LED technology in terms of trucking alone ….. as the fixtures are very compact yet with serious punch / intensity!”

Mondiale’s Event Manager Ben Chadwick commented, “Robe's continued support of the TPi Awards has helped us to develop the event to an ever growing and more international audience. Through every part of the production process both Robe and HSL have been instrumental in helping to create a memorable event.”

The entire lighting rig for the TPi Awards was supplied from Robe’s factory in the Czech Republic …. And every single fixture was pre-sold – such is the current demand for these units.

Controllux, Robe’s Benelux distributor took immediate delivery of all the DLX Spots, the CityFlex 48s were all spoken for, and 64 of the LEDWash 300s were snapped up by Norsk Sceneteknikk from Norway ….. among others.