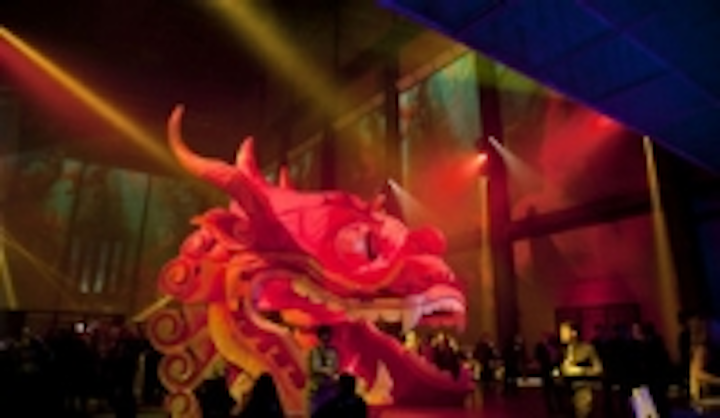 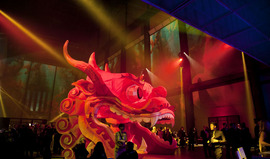 Gray was working for Skyfall after-party event producers AD Events. A demanding production brief included making the after party equally as dazzling and memorable as the premier screening at the Royal Albert Hall.

The event took up the entire Turbine Hall of the Tate Modern (formally a power station), and once again gave Gray the opportunity to work his lighting magic in this most distinctive and uber cool architectural space.

Gray says, “The Turbine Hall is an amazing environment to work in and already highly atmospheric, so the real challenge was to add requisite 007 qualities like mystery, action and intrigue to the setting, and to further WOW those who had already been blown away by experiencing the movie premier!”

A massive effort was made to keep the space as clean and clear of visible rigging and technical infrastructure as possible. Special scaffolding structures were built around the pillars to provide lighting positions and to avoid having to run overhead trussing down the room.

Fixture placement was all the more crucial as lighting also had to enhance massive scenic projections onto the walls of the Turbine Hall that transported everyone from the banks of the Thames to the edgy street scenarios of downtown Shanghai!

Additional video and effects were played out on a series of staggered floor-standing LED screens at the end of the Hall, and the event space was further enhanced by several props from the film, including an 8 metre high Chinese dragon and an Aston Martin DB5 car.

While this made the lighting design process infinitely more of a brain-teaser, Gray also relished the task that much more. “You really had to think carefully about using lights appropriately and simultaneously maintain the raw, industrial beauty of the venue,” he explains.

The most important psychological task for lighting was to create a high-impact entrance for the 1600 guests. Gray ensured that this happened on The Bridge immediately as everyone entered the Turbine Hall – it was the first impression they had of what they were about to encounter.

He used 24 Clay Paky Sharpies at the end pointing directly into the entrance, shooting piercing shafts of light down the Bridge, while people flowing in to the building were silhouetted with 12 x Vari*Lite 3500 Spots from behind the entrance which stunned everyone! It had a powerful and emotionally visceral effect!

Underneath the Bridge was an assortment of luminaires including Martin MAC 301 LED wash moving lights, ETC Source Fours and pin-spots, rigged on two runs of black truss concealed between the structural RSJs.

Fastidiously positioned and focussed Source Four PARs and Codas on top of the Bridge were used to generally illuminate the space below including the seating areas.

At the far end of the Turbine Hall, Gray used a combination of Chroma-Q Color Force 48 and 72 LED battens, Clay Paky Sharpies, Alpha Wash 1500 and Martin MAC 700 Profile moving lights, together with Source Four profiles for highlighting. After only one intense overnight programming session – which was all they had - a steamy molten mix of Oriental nightscapes created by video and lighting pervaded the Tate Modern!

The interior lighting was programmed and run by Rob Gawler using a Hog 3 console, with the exterior run by Matt Waterfield on a Chamsys MagicQ 100 console.

The majority of the lighting equipment came from Neg Earth, a regular Renegade supplier, with specific specialist elements and the Chamsys console supplied by Renegade.

The impressive projections and other video content were designed by Richard Bagshaw of Digital Insanity with equipment supplied by CT London and Dobson Sound was the audio contractor.