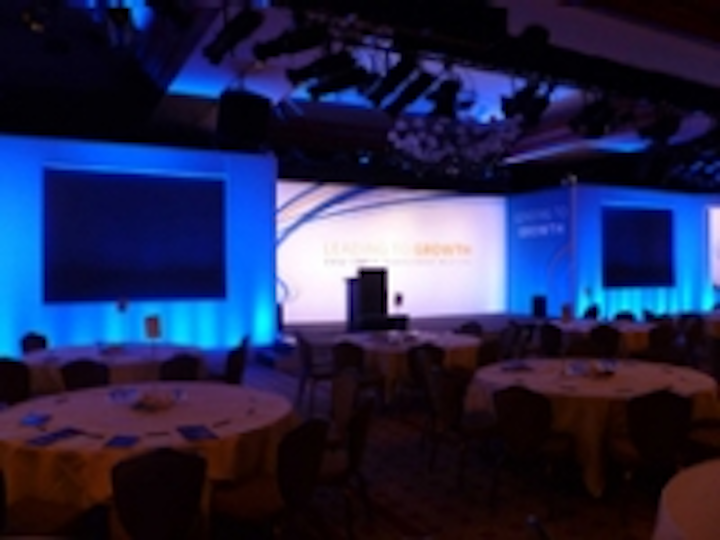 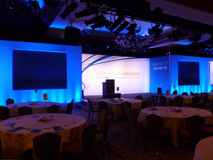 Wellington, Fla. - For Chicago based lighting design and production services company CenterStage Productions, finding the right fixture to replace Source Four® ellipsoidals with color scrollers and dimmers was imperative to meet the requirements of budget demanding clients. Reflection LEDko by Coemar, the first LED profile delivering both Soft and Hard Edge profile optics, proved to be a natural fit in meeting these goals.

Experienced production designers Bruce Holland and Olivier Ilisca founded CenterStage Productions in 1996. The company provides the corporate theater market with superior quality, dynamic and exciting designs at events across the U.S. and around the world.

“I’ve been waiting a couple years now for an LED unit that could replace our Source Four ellipsoidal fixtures with scrollers,” said Ilisca. “For smaller scale shows with lower ceilings and a limited budget, the Reflection LEDko is the perfect choice. With its vivid colors, bright beams and no scrollers, the LEDko FullSpectrum was able to keep up with our overall lighting levels.”

Reflection LEDko is a revolutionary new LED fixture and the first LED profile capable of projecting soft-edged profile light with no reduction in light intensity due to additional filters. It is also the first LED profile that can be used in the same way as traditional profiles and can obtain any color tone, shade and white light.

“At a recent corporate financial conference in California, we used 20 Reflection LEDko FullSpectrum fixtures and were very happy with their performance. Not one of the units failed and we were able to provide various scenic lighting without the need for scrollers, which is a great alternative to expensive moving lights with shutters,” concluded Ilisca.

CenterStage Productions approached LED Source®, an international LED lighting supplier and the exclusive distributor of Coemar LED products in North America, to spec an event after hearing about the new Reflection LEDko. “This was the perfect solution to meet their specific design requirements,” said Jerry Mitchell, Coemar Sales Manager at LED Source. “In the past, using technology such as the traditional Source Four profile with scrollers, required multiple dimmers and long setup times. They were also bulky and cumbersome with multiple parts leading to more possible failures. By changing to the LEDkos, we eliminated the noisy scrollers, the power supplies, and extra gear translating to a smaller truck pack and fast setup.”
Applying the Reflection LED technology makes it possible to reduce energy consumption from 575-750 Watts to 150 Watts. The LED lamps last up to 50,000 hours without loss of brightness, thus no maintenance costs.

Because LEDs do not emit heat, Reflection LEDko is capable of utilizing images or gobos created with any standard printer and a transparency sheet. This technology allows you to project any image such as a corporate logo quickly and without cost, while also eliminating the entire gobo buying process, which was previously dependant on glass or metal patterns.

About LED Source®:
Founded in August 2005 by Marcel Fairbairn, LED Source® is an international supplier of LED lighting that specializes in full-scale evaluations and retrofits through its Retrofit Division, in addition to providing consultation all the way through to supply on new projects within their Architectural and Entertainment Divisions. Additionally, the company launched a franchise program in October 2009 and expects to have a network of 150 franchise offices throughout North America within three years. For more information, please visit www.LEDsource.com or the company’s blog at http://getleducated.wordpress.com.

About CenterStage Productions:
Started in 1996 by partners Bruce Holland and Olivier Ilisca, CSP set out to fill a void in the Chicago lighting design market. Both Bruce and Oliver, experienced production manager and designer, saw the lack of quality and dynamic lighting design in Chicago and set out to provide just that. Over 3,000 shows later, CSP is still fulfilling its original goals. Over the years, CSP has expanded it operations and manages services across the country and around the world.