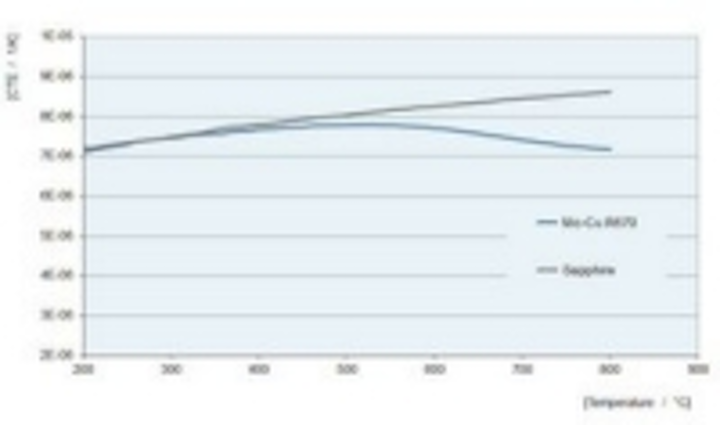 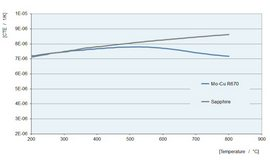 The high thermal conductivity of MoCu R670 ensures optimized heat dissipation in LED chips. The new material has the same coefficient of thermal expansion (CTE) as sapphire (see chart), and therefore reduces defects in the semiconductor structure which can occur during the hot bonding process. In this way, Mo-Cu R670 helps ensure the reliable production of LED chips and increases the efficiency of the light source.

In the most commonly-used process for the production of blue spectrum chips - including white LEDs - gallium nitride-based semiconductor layers (GaN) are grown on sapphire substrates using epitaxial growth methods like MOCVD. A metallic wafer, intended for the dissipation of heat, is then bonded to the semiconductor layers at high temperatures using various joining technologies.

Stresses caused by different coefficients of thermal expansion can lead to cracks in the semiconductor layers. To prevent these defects, the metal wafer substrate ideally possesses the same CTE as sapphire.

Molybdenum is commonly used for such wafer substrates. This material offers good thermal conductivity and is very heat-resistant. However, molybdenum has a lower coefficient of thermal expansion than sapphire.

R670 has a thermal conductivity of 170 W/mK and, with 6.7 ppm/K, the same coefficient of thermal expansion as sapphire (Al2O3).

PLANSEE can supply Mo-Cu wafer substrates with coatings made from nickel-gold, ruthenium, chromium, silver and other interface materials. These coatings protect the wafer substrate against corrosion and optimize its surface properties for the subsequent bonding process.

As one of the world's leading manufacturers of refractory metals and composite materials, PLANSEE supplies metallic wafer substrates for heat dissipation and also numerous other components for the production of LED chips and LED packages. These include furnace components and molybdenum and tungsten crucibles for sapphire single crystal growth, components for MOCVD/MBE reactors, evaporation boats and coils for metallic mirror or barrier layers and base plates for improved thermal management of high-power LEDs.