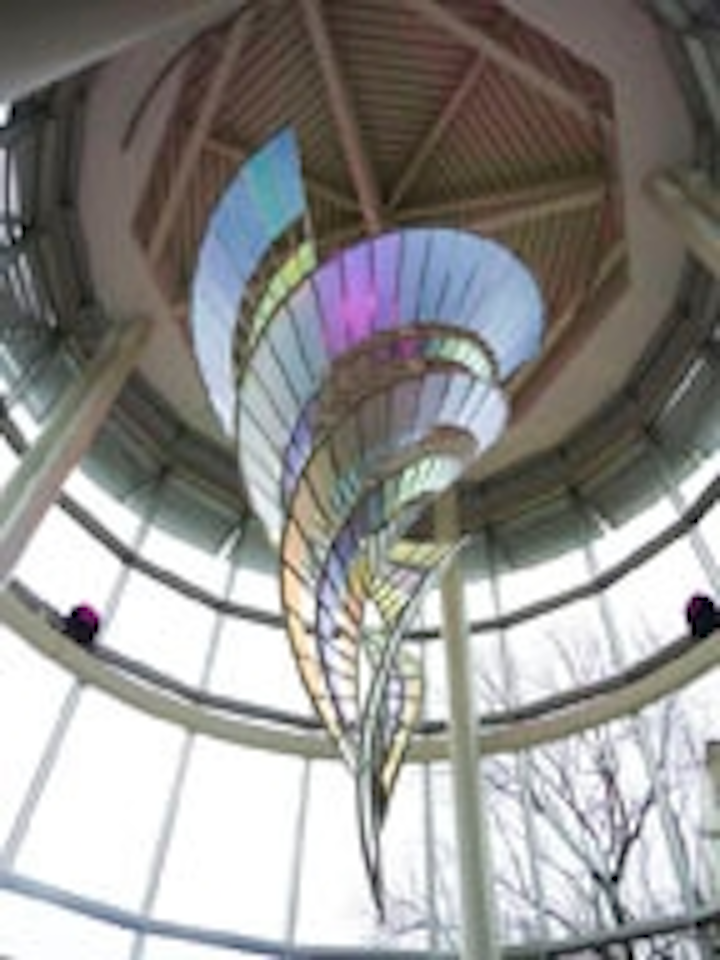 Robe ROBIN 600 LEDWash and 300 Plasma Spot moving lights have been installed to illuminate a beautiful 20ft high triple helix glass sculpture created by artist Lyle London, which is suspended in the new Rotunda entrance of the Joyce Eichhorn Ames School of Art in Bloomingdale, Illinois, USA.

The sculpture – an intricate work of extreme elegance inspired by nature’s recurring spiral forms - was commissioned by the Illinois Wesleyan University (IWU). It is part of a series of Helix artworks conceived by London that are intended for public atriums. His Tempe, Arizona based company Art In Metal has been established for 25 years, and he has been using glass in most works since 2000.
London has used Robe products in the past, most notably to illuminate another Helix series work in 2007 for the Tahoe Tower lobby at the Renown Healthcare campus in Reno, Nevada. When given the go-ahead on this project, he approached Robe Lighting Inc’s Jerry Seay for advice on the latest technology available for integrating with his latest Helix.

Seay – who loves lighting artworks – was hugely excited by the prospect, as was London, especially when he realised the true potential of combining Robe’s LEDWash 600 and 300 Plasma Spots.
Many ideas were sparked and shared! A major one was that the Helix could be transformed from being an ‘exclusive’ sculpture hanging in a tower into a living, breathing phenomenon to be enjoyed by all passing through the campus.

Although the Helix itself is not moving, the illusion of movement and kinetic energy is produced by a fusion of colour and animation created by subtly changing effects – both from the Robes, and the natural light permeating the glass walls of the Rotunda, and the interaction between the two.

The Helix and its lighting can be appreciated and viewed from any number of angles and distances and at all times of the day and night, and each time something unique and special can be experienced.
Another primary objective of the lighting was to reveal the dichroic colours of the glass and modify them with vibrant colour projections.
London comments, “I knew from experience that the full dynamic colour qualities of the dichroic glass could only be unleashed by using dedicated lighting. The programmable features of the Robe fixtures and the true whites made them an ideal choice to light the sculpture”.

Seay also brought Darrell Barnes from Creative Stage Lighting into the equation, to install the Robe lighting system and take care of the programming, which he completed in close conjunction with London.
The three LEDWash 600s are spaced evenly around the middle structural ring of the Rotunda, with the two Plasma Spots on the lower ring.
Both types of fixtures were also specified for their reliability, longevity and low maintenance – as they are all in difficult-to-access positions. They also draw a minimal amount of power, making it a very eco-friendly installation.

The initial programming of the Robes was done using an Avolites Titan Mobile console, and then transferred to a wall-mounted Doug Fleenor Arch2 DMX playback-only controller.

The lighting presets offer a range of alternative moods and atmospheres for the impressive 35ft high Rotunda space - in addition its effect on the sculpture itself – as this will be used by IWU as a performance, meeting and event space.

London hopes that IWU’s theatre students might also be able to use the lighting installation in their future projects, maybe by hooking in their own console and creating their own scenarios, and he’s discussing the possibility of adding an interactive sound controller to allow instrumentalists or vocalists to trigger lighting during performances in the Rotunda.

Triple Helix sculpture design - including the lighting programming – is the copyright of Lyle London. Photos are also © Lyle London and Mark Featherly