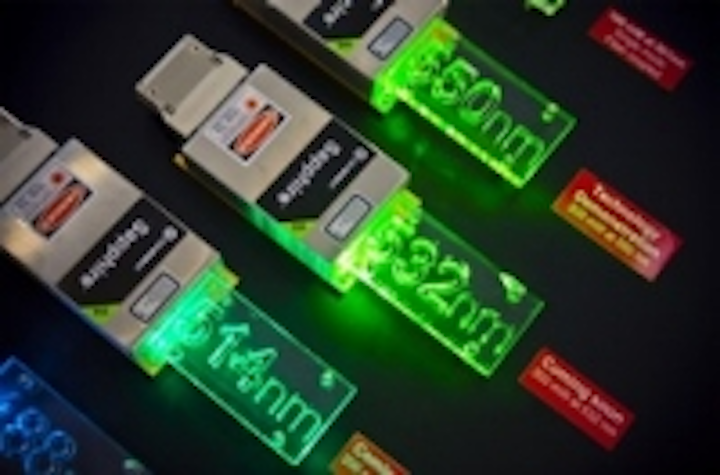 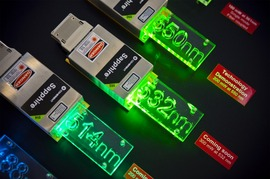 Munich - With the increasing scarcity of natural resources, demand for sustainable technologies and efficient use of existing energy reserves is escalating. In response, LASER World of PHOTONICS 2011 will present highly promising, energy efficient solutions for lighting and optical technologies, with particular emphasis on automobile electronics, portable communication devices, medical technology and general lighting.

Using the motto "Green Photonics", LASER will showcase the various ways in which LEDs and Organic LEDs (OLEDs) are replacing energy-intensive lighting systems. "Environment and energy" will be one of three focus topics at the show, featuring general lighting with its short innovation cycles.

"Climate protection and energy efficiency" focus topic will include research institutes and companies with new products and applications in lighting technology located in the exhibition area "Lasers and optronics" in Halls B1 and C1 at the Munich Trade Fair Centre.

"We are seeing a new trend particularly in the area of mobile applications," said Rainer Friedrichs, Director of IR Marketing at OSRAM Opto Semiconductors GmbH, Regensburg. "The combination of IR emitters, intelligent sensors and high-performance LEDs through to visible lasers will lead to a pronounced change in the functionality of smartphones or digital cameras. Whether flashlight, embedded projection, brightness control or touchless control, opto-semiconductor components in the visible and infrared spectrums have finally obtained here a permanent place in intelligent light management and function diversity on the rapidly expanding consumer market." But even wherever no batteries are used, LEDs are gaining ground as energy conservers. Effective March 5, 2010, new electrical devices in Europe must consume less than 1 watt in standby mode. This law has stimulated market demand during the last 12 months for energy efficient LEDs.

Also on exhibit will be intelligent lighting systems for use in car headlights, taking advantage of the adjustment of LED color and output light angle.

Green technology - OLEDs on the increase

OLEDs are light sources built on a flexible, organic substrate. They are comparatively environmentally-friendly and, unlike many energy-saving florescent bulbs, do not contain heavy metals.

"The 'Center for Organic Materials and Electronic Devices Dresden' (COMEDD) is working on solutions to make OLEDs market-ready for new lighting concepts," said Dr. Christian May from the Fraunhofer Institute for Photonic Microsystems (IPMS), Dresden. "OLEDs are opening up fantastic opportunities for the lighting market: they give off two-dimensional light, the light elements can be transparent and flexible OLEDs applied to plastic or metal films will soon illuminate round or curved surfaces. All this is possible with high energy efficiency and minimum material consumption - the OLED is therefore a genuine 'green' technology in all colors!"

The future of OLED technology

OLED technology makes new, futuristic-looking applications possible: transparent screens or partition walls can be used for visual displays or as room lighting. Thanks to the relatively easy integration of touch sensors, OLEDs produce very inexpensive and energy-efficient touch displays. The Fraunhofer Institute for Photonic Microsystems (IPMS) will present a new OLED backlighting system for autostereoscopic 3-D displays, OLED light elements for general illumination and a bidirectional OLED microdisplay for mobile applications with a brightness of 1000 cd/m2 on Stand 417 in Hall B2 at LASER World of PHOTONICS 2011.

Together with the Fraunhofer IPMS, 3D-Micromac AG, Chemnitz, will exhibit a new OLED lighting element on Stand 364 in Hall C2. The prototype is intended for use in advertising signs or small lighting applications such as background lighting of LCD displays, and is characterised by its low operating voltage. The lighting element, which is just a few millimetres thick and has a diameter of 80 millimeters, is far more efficient than conventional OLEDs. With a brightness of 1000 cd/m2, it is almost impossible to detect any heat generation.

As part of the World of Photonics Congress, the practical talk entitled "Solid-state light sources" in the Photonics Forum in Hall B2 on 25 May 2011 will provide information on developments in LED technology. Indoor and outdoor lighting possibilities by means of LEDs and OLEDS will be described.

About LASER World of PHOTONICS

LASER World of PHOTONICS is regarded as the home base of the photonics industry. According to a survey conducted by Infratest, 98% of exhibitors and 97% of visitors were extremely satisfied with the trade fair and intend to return in 2011. In addition to business objectives, the cultivation of contacts in the industry plays a very important role for all participants.

This year will feature four focus topics "Lasers and Laser Systems in Production", "Green Photonics", "Biophotonics and Life Sciences" and "Security and Defense".

LASER World of PHOTONICS has been held every two years since 1973. In 2009 it attracted 1,034 exhibitors and 25,365 visitors. The number of exhibitors and visitors from outside Germany has risen continuously and is presently 57% for exhibitors and 51% for visitors.

A sister event, LASER World of PHOTONICS China, is the leading regional trade show for optical technologies in China. It takes place in Shanghai March 15-17, 2011.

Information on LASER World of PHOTONICS can be found in the Internet at www.world-of-photonics.net/en. Please order your tickets

About the World of Photonics Congress

The Congress program will include a new event, "Optofluidics", organized by the European Optical Society (EOS). The Optical Metrology Conference includes a new subconference, "Videometrics" in addition to its traditional program contents.

More information about the Congress is available at: www.photonics-congress.com.

Messe München International (MMI) is one of the world's leading trade-fair companies. It organizes around 40 trade fairs for capital and consumer goods, and key high-tech industries. Each year over 30,000 exhibitors from more than 100 countries, and over two million visitors from more than 200 countries take part in the events in Munich. In addition, MMI organizes trade fairs in Asia, Russia, the Middle East and South America. Via its six subsidiaries - in Europe and in Asia - and 64 foreign representatives actively serving over 90 countries, MMI has a worldwide business network. Environmental protection and sustainability are key priorities in all MMI´s operations, at home and abroad. Further information: www.messe-muenchen.com.

With a combined total of 1,300 exhibitors and more than 50,000 visitors in Munich and Shanghai, Messe München International is one of the world's leading trade show organizers for lasers and photonics. The World of Photonics websites at www.world-of-photonics.net/en offer information on the photonics trade shows, industry information, market data, details on product innovations, and application reports.