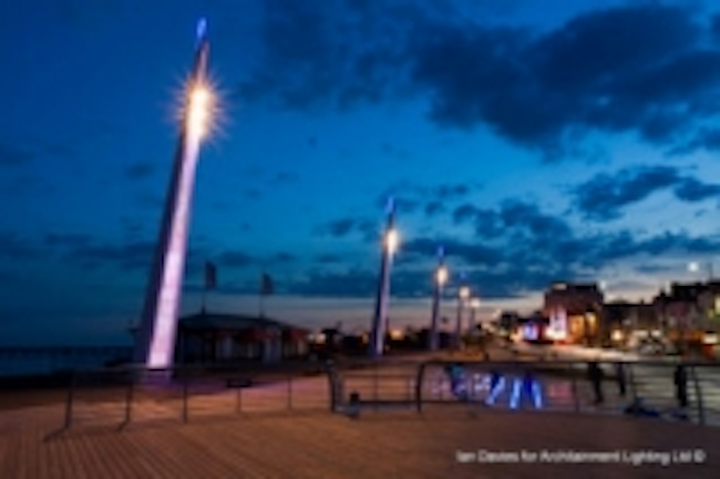 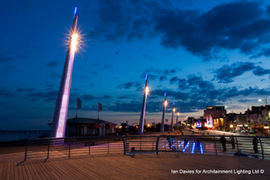 As part of Southend-on-Sea Borough Council’s ‘Better Southend’ scheme, Architainment Lighting Ltd was approached by lighting design consultants, Pinniger, in spring 2009 to provide programming, commissioning and LED expertise for six lighting masts to be erected along the town’s promenade.

The council called on Pinniger who contacted Architainment for its LED programming and control equipment as well as street furniture and external lighting manufacturer, Woodhouse, to work on making the 21.6m-high masts a reality. After a period of consultation Pinniger specified 180 strings of Philips Color Kinetics’ iColor® Flex LMX.

Using 30 strings per mast, this flexible strand of large, high-intensity, full-colour LED nodes has been designed to illuminate vast distances without the constraints of fixture size or shape. Each iColor® Flex LMX strand consists of 50 individually addressable LED nodes, each producing full-colour output of up to 6.56 candela. Given the beach-front location of the masts, the technology needed to be both durable and weather resistant, and ideally, the iColor® Flex LMX is fully sealed for maximum fixture life and IP66-rated for outdoor applications.

The six masts can either combine to make up one large low resolution video screen or individually display various visual effects via dynamic RGB. The control system for the installation is centred on a Pharos Controls LPCX Lighting Playback Controller. The LPCX uses a Philips Color Kinetics proprietary Ethernet protocol called KiNET to communicate with the 180 Philips Color Kinetics PDS60ca Power/Data Supplies that drive the 9000 nodes of iColor® Flex LMX.

The LPCX also simultaneously outputs the ARTNET Ethernet protocol to communicate with seven Artistic Licence ArtLynx O/P units that in turn ouput DMX to manage nonEthernet controllable fixtures. Also used in the control system are two Artistic Licence ARTRELAY units, which are again controlled via ARTNET from the LPCX. The ARTRELAY units are used to control electrical contractors that switch the ambient white lighting on each of the masts, and in other pedestrian areas. Commenting on the installation, Architainment Lighting Technical Services Manager, Chris Campbell said: “A great deal of work has gone into completing the lighting masts for Southend city beach and we’ve really enjoyed working with the council, Pinniger’s and Woodhouse on this challenging but incredibly rewarding project.”

A series of light shows will be played on a nightly basis, triggered by the internal astronomical clock of the LPCX. The controller will be interfaced with standard Photocell that will be used to activate the ambient white lighting in the pedestrian areas.