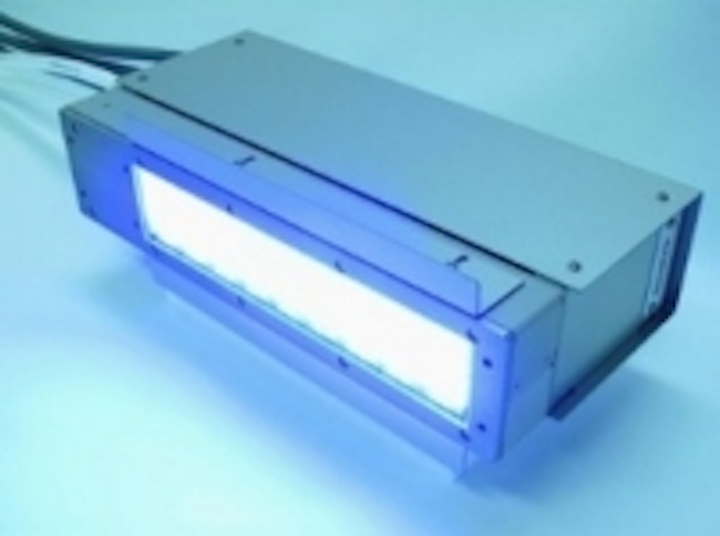 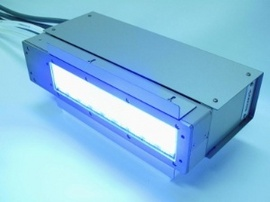 Kyoto, Japan -- Kyocera Corporation today announced that it has developed the KVL-G3 Series LED-UV curing system, a key component in industrial printing machines, which supports the industry's fastest label printing (80m/min.)*1 for use in UV curing-type printing -- a printing method that hardens and fixes ink with irradiating ultraviolet (UV) rays.

Moreover, the new product achieves a 70% reduction* in power consumption by using LEDs in place of conventional lamp-system products (metal halide). The KVL-G3 Series was made available to the market on July 8.
(* *2 Based on research by Kyocera. Estimated using the KVL-S09E-G3 when compared to a metal halide lamp of 4.8kW, and based on the following conditions: 8 hours/day x 250 days of operation/year.)

The LED wavelength is 385 nm, and the systems' designated lifetimes are 15,000 hours.

Recently, the use of digital printing, which enables fast printing of even small-volume wide-variety labels in a short delivery time, is expanding in the label printing market mainly engaged in printing product packages for commodities such as beverages. Among the various printing methods, the UV curing-type attracts attention due to its convenience in allowing printing on a wide variety of non-paper media including plastic sheets, as it enables printing without the need for ink to penetrate the print medium, as well as its eco-friendly composition that does not use volatile organic compounds (VOCs) as solvents.

The KVL-G3 Series features a power-saving system which enables a 70% reduction in electricity consumption compared to existing lamp-system products (metal halide) by using LEDs as the light source for curing ink. In addition, thanks to Kyocera's proprietary high-density packaging technologies, the company has succeeded in arranging LED chips on a high-density surface as opposed to in-line conventional products. With this development, Kyocera has enabled the fastest label printing capability for the UV curing-type printing method in the industry (80m/min).

Kyocera has been actively rolling out inkjet printheads, key devices for digital printing, which feature high-speed, high-definition and highly reliable printing. With the launch of this product, the company proposes an even more efficient printing method by combining its inkjet printhead and LED-UV curing system. In addition, in other markets such as offset printing, Kyocera will actively encourage customers to replace their current UV curing systems -- which use much higher energy-consuming lamps -- with this new product by focusing on its superior energy-saving features. In doing so, Kyocera aims to contribute to reducing the environmental burden within the printing industry.