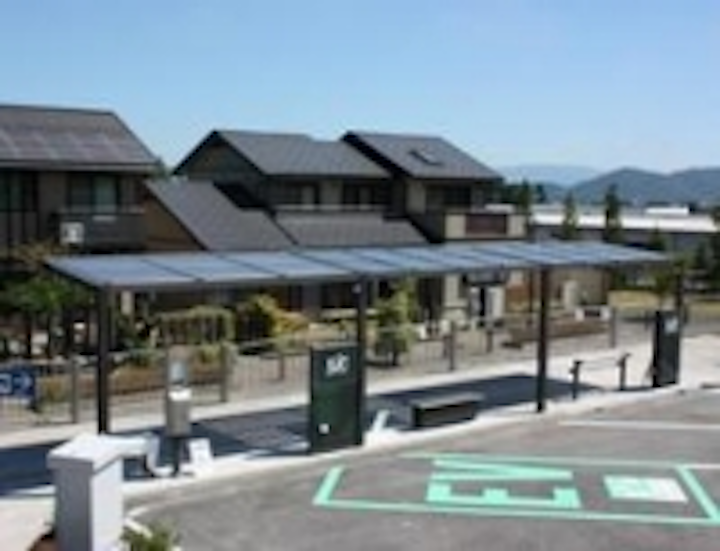 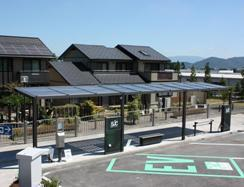 Sekisui Jushi Corporation (Headquarters: Osaka, Japan; herein "SJC"), Kyocera Corporation (Headquarters: Kyoto, Japan; herein "Kyocera") and its wholly-owned domestic solar energy sales subsidiary Kyocera Solar Corporation announced the co-development of the Eco-Shell* — a multi-purpose solar power shelter which uses a Kyocera solar power generating system for the roofing material and energy-conserving LEDs for lighting. The new product is intended for use in public places where shelters provide cover against the sun and rain such as bus & taxi stops, benches and walkway coverings. It will go on sale from July 20, exclusive to the Japanese market, targeting municipalities and private companies.

The shelter combines SJC's conventional multi-purpose shelter unit with a Kyocera solar power generating system and energy-efficient LED lighting to create an eco-friendly weather covering alternative to those often found at bus stops and other public spaces. Once the product goes on sale later this month, the two companies will propose its use for a wide range of applications across Japan.

Across Japan energy reduction countermeasures are starting to be made in earnest due to the effects of the March 11 earthquake and resulting nuclear power situation. Furthermore, environmental awareness in urban planning has also been receiving a lot of attention. The electricity generated from the shelter's solar power generating system can be used for surrounding electrical needs, such as lighting for advertising displays, with excess power being sold to the power utility companies, thus helping to meet expected power shortages in Japan during the summer. Furthermore, the shelter uses low-energy LED lighting to reduce both power consumption and CO2 emissions at night.

Moreover, the shelters can be used as emergency power supplies in the event of a disaster, as the shelter has an independent power outlet that could be used to charge mobile phones or other vital electronics.

SJC and Kyocera have co-developed the solar power shelter with the goal of making a contribution to solving the issues of energy conservation and environmental protection.

SEKISUI JUSHI CORPORATION ("SJC")(TOKYO:4212) was established in November 1954, in Osaka, Japan. Since then, the company has lived up to its corporate slogan, "Creation of new values," through the development of new materials and the compounding of plastics with other materials such as metals, textiles, woods and glass fibers. The company's goal is to create safer, more comfortable public spaces by utilizing various configurations of equipment and facilities to be installed. Sekisui Jushi proposes an intelligent, people-friendly road & urban environment that combines the company's accumulated road traffic safety technology with advanced solar technology.