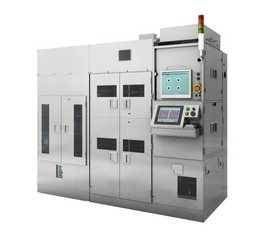 These latest models of the UX4-LEDs are based on the same platform as USHIO’s field-proven UX series, which has an installed base of more than 1,100 systems. They will be exhibited through a panel display at SEMICON West 2011, to be held on July 12 through July 14 at Moscone Center in San Francisco, California. (Booth #2633)

UX4-LEDs LLO 150:
a 150-mm Wafer Laser Lift-off System for HVM of Vertical Structure LED Chips
The laser lift-off (LLO) technology, for stripping a GaN film from a sapphire substrate, is indispensable to increase LED brightness. Leveraging the field-proven photolithography excimer laser, well known for high repetitive frequency and high stability as well as proven DUV optical technologies, USHIO has succeeded in developing the UX4-LEDs LLO 150 laser lift-off system that can achieve both high yield and high throughput. This system also make a contribution to significant reduction of the LED manufacturing cost because it allows reuse of a sapphire substrate by stripping the GaN film from the entire sapphire substrate surface.